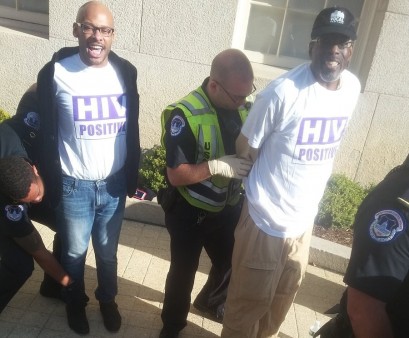 Ten activists were arrested near House Speaker Paul Ryan’s office in Washington, DC, on World AIDS Day, December 1. They were part of a larger group protesting funding cuts to HIV/AIDS programs, The Washington Blade reports. They also denounced President-elect Donald Trump’s pick of Tom Price as secretary of the Department of Health and Human Services (HHS).

Price, a U.S. representative from Georgia, has already developed a plan to end the Affordable Care Act (ACA, or Obamacare) and says he wants to cut Medicare and other safety nets (to read how Price’s plan would affect people with preexisiting conditions, click here).

The act of civil disobedience was led by HIV/AIDS activist Matthew Kavanagh, senior policy analyst at Health GAP, who brought protesters to Ryan’s office on Capital Hill. They presented two of Ryan’s staffers with a letter outlining their grievances, the Blade reports (you can watch a video of that below).

Police directed the activists to leave the hallway or face arrest; 10 people were arrested under a code that bars “crowding, obstructing and incommoding,” which is a misdemeanor.

Before heading to Ryan’s office, protesters held a rally and demonstration. They urged Ryan and Price to keep their hands off Medicare, Medicaid and the ACA. “Paul Ryan, don’t you dare, privatize our health care,” the activists chanted. Participating groups included ACT UP, Health GAP and VOCAL-NY and others.

Many held signs telling Speaker Ryan to “Keep your corporate hands off my Medicare.”

Below are several of their tweets from the day.

We just gave @SpeakerRyan a wake up call - People with AIDS say NO to the privatization of our healthcare #AIDS NIGHTMARE #WorldAIDSDay pic.twitter.com/J1oP8FGpwO

Even as they are removed forcibly by Capitol Police activist can not be silenced. #WorldAIDSDay pic.twitter.com/864ofUyT5T

“In 2016 we should not be here still fighting for things we’ve already won.”-@ACTUP Philly’s Jose DeMarco #WAD2016 pic.twitter.com/B9j9O9lW1q