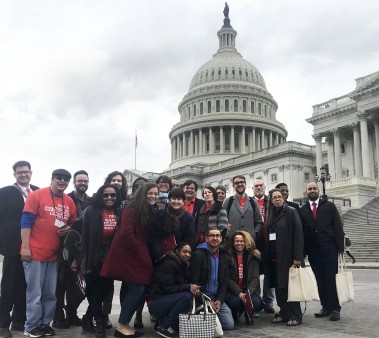 HIV advocates in DC, as captured in hashtags, pics and videos.

The 25th AIDSWatch, the annual lobbying event at our nation’s capital, took place earlier this week, March 26 and 27. More than 500 HIV-positive people and their allies from around the nation participated in the event. Monday offered a full day of meetings, networking opportunities, awards presentations and panel discussions. Tuesday kicked off with a rally in front of the Capitol, which was followed by lobbying sessions with Congress members.

Sponsored by The Elizabeth Taylor AIDS Foundation, AIDSWatch is organized by AIDS United, the Treatment Access Expansion Project and the US People Living with HIV Caucus.

For more details about the event, see AIDS United’s press release here and our coverage of the Leadership Awards here. The next best thing to being in DC with the advocates is logging onto social media, searching #AIDSWatch and taking in the show. Below, we offer a tasting of tweets:

Watch out DC! A Girl Like Me/Una Chica Como Yo bloggers @MariaHivMejia, @AriannaLint , @aryahelle , and Rosa Rivera are at #AIDSWatch and will be speaking out on behalf of women of color, Latinx, trans women, and #WLHIV & #PLHIV to their representatives! #HIVresists pic.twitter.com/RvzqBRILcs

Had the best day on Capitol Hill with these awesome advocates from Minnesota for #AIDSWatch Thanks to all who engaged. Feeling very privileged to learn from such inspiring leaders! pic.twitter.com/vs5I6aHvlr