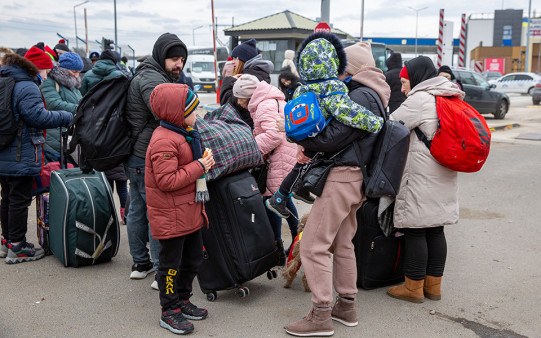 How UNAIDS, PEPFAR, WHO and other global AIDS groups are racing to get HIV meds to Ukrainians who need them to survive.

UPDATE: The below article about global efforts to get HIV meds to Ukrainians who need them was published April 11, 2022. Since then, the U.S. Department of State released more information about U.S. support through the President’s Emergency Plan for AIDS Relief (PEPFAR). “Over the past two months, PEPFAR has invested a total of $13 million in emergency funding to procure 51 million doses of antiretroviral medications (ARVs), enough to meet the urgent treatment needs of Ukrainians living with HIV for up to a year,” according to the press release. “PEPFAR delivered an initial 18 million doses of the ARV tenofovir, lamivudine and dolutegravir (TLD) on April 7. These medications are already being rapidly distributed to people living with HIV across Ukraine. PEPFAR subsequently procured an additional tranche of more than 5 million courses of treatment of TLD and other ARVs that are expected to reach Lviv by the end of April. On April 13, PEPFAR authorized its third and largest procurement of ARVs to date, with more than 28 million more doses of treatment to meet Ukraine’s request for PEPFAR to provide a 12-month supply of lifesaving ARVs for the country.”

You do the math: It’s estimated that about 260,000 Ukrainians were living with HIV before the war broke out and that 152,000 of them were taking daily lifesaving meds to suppress their virus. Plus, it’s presumed that half of Ukraine’s pharmacies are shuttered.

It all adds up to an HIV crisis that’s unfolding amid a large-scale humanitarian catastrophe. But help is on the way from the Joint United Nations Programme on HIV/AIDS (UNAIDS) and other global health groups. Together, they’re sending a 12-month supply of HIV meds to Ukraine. According to UNAIDS, a shipment of 209,000 units of 90-day supplies of HIV meds arrived in Lviv, Ukraine. Distributing them will be a challenge—but not impossible.

“Through remarkable efforts by civil society and government, most sites providing antiretroviral therapy are still at least partially functioning, but the war has disrupted supply chains and patients’ access to those sites,” said Winnie Byanyima, executive director of UNAIDS, in a press statement. “Partners on the ground are scrambling to get lifesaving medicines to people safely. The flexible ability of civil society to reach people is vital and funds are urgently needed to support and strengthen these critical lifelines.”

What’s more, with the help of drugmaker ViiV Healthcare, donated HIV meds are being provided to Ukrainian refugees in Poland, the Czech Republic and other European Union countries. More information is available on the ART (antiretroviral) Initiative for Ukrainians Abroad website (eceenetwork.com/patients).

Anyone in Ukraine seeking antiretrovirals is urged to call the Ukrainian HIV hotline: 0800 500 451 (more info is found at helpme.com.ua/ua/main/).

Joining the UNAIDS efforts are the U.S. President’s Emergency Plan for AIDS Relief (PEPFAR), the World Health Organization (WHO), UNICEF, the United States Agency for International Development (USAID) and the Global Fund to Fight AIDS, Tuberculosis and Malaria.

UNAIDS has appealed for “unimpeded access to all affected people and communities” and also plans to provide harm reduction services such as opioid substitution therapy.

In related POZ news, see “#WeStandWithUkraine and HIV-Affected Ukrainians,” in which José M. Zuniga, PhD, MPH, president and CEO of the International Association of Providers of AIDS Care  and the Fast-Track Cities Institute reflects on the current humanitarian crisis in Ukraine and how you can help.

Want to know where you can donate money to help Ukrainians with HIV? Read the blog post “When I Get Scared” by NMAC’s Paul Kawata for information on Coalition PLUS.