Detail from the cover of the 2021 LGBTQ health report; click to watch a video on the report. IAPAC.org / Video: YouTube/IAPAC

If you’re a person living with HIV or a member of the LGBTQ community, how would you rate your quality of life on a scale of 1 to 5? How would you rate your city? In essence, that’s what a new global report has tried to measure for 50 cities and municipalities participating in the international HIV initiative called Fast-Track Cities. The report assessed various health factors, including those related to HIV, that affect LGBTQ people in those 50 cities.

The results? A summary of the report’s key takeaways offers these six insights:

The meaningful engagement of #LGBTQI communities in our efforts to end #HIV and other health conditions goes hand in hand with our understanding the diversity and complexity of the communities’ needs. @CPH2022 https://t.co/t4u9qC2sAT pic.twitter.com/0oRpejQet4

Titled LGBTI+ Health Equity: A Global Report of 50 Fast-Track Cities, the report was funded with help of ViiV Healthcare and produced by the International Association of Providers of AIDS Care (IAPAC), which spearheads the Fast-Track Cities initiative to end the epidemics of HIV, tuberculosis (TB) and viral hepatitis (hep B and C) by 2030. The report was released August 18 to coincide with Copenhagen 2021 WorldPride.

“The link between LGBTI+ health equity and our work at IAPAC is perhaps obvious given the longstanding and staggering disparities that LGBTI+ individuals face with respect to HIV,” writes IAPAC president and CEO José M. Zuniga, PhD, MPH, in the report’s introductory letter. (You can watch Zuniga in the video at the top of this article; it’s also available on IAPAC’s YouTube channel.) 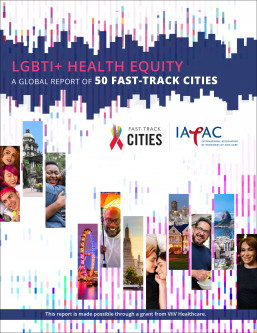 The cover of the 2021 LGBTQ health reportIAPAC.org

“While HIV continues to be a critical issue in LGBTI+ health,” Zuniga continues in the letter, “we cannot allow that to be the only LGBTI+ health topic that is studied, discussed, funded and actioned. Fundamentally, LGBTI+ health equity is about stigma, discrimination, and injustice, but also about resilience. The history of conditions facing LGBTI+ communities has led to myriad health inequities—including physical, mental, and behavioral—that are all interwoven.…

To that end, the report and survey aim to understand and improve the health equity of LGBTQ individuals in Fast-Track Cities.

3.2 on 1 (poor) to 5 (excellent) scale speaks to the need for increased attention to quality of life for #LGBTI communities worldwide. #CPH2021 https://t.co/5Cy2wa0yo1 pic.twitter.com/esunjSnwr1

One aspect of the report measures a number of social determinants of health, rating them on a scale of 1 (not a problem) to 4 (serious problem). Topics include housing access (a 3.2 rating), employment access (2.9), criminal justice for people of color (2.8) and discrimination based on gender identity (3), sexual orientation (2.7) and HIV (2.4).

In its executive summary, the report notes, in part:

[M]any cities lacked data beyond HIV among sexual minority men and transgender women, and some other conditions with respect to sexual minority men only. These results indicate a dire need for disaggregated data on LGBTI+ health, particularly at the local level, where interventions are implemented.

HIV-related services received by far the best rating when looking at access to care for LGBTI+ individuals, scoring a 3.8 on a 1 to 5 scale. Primary care was next, with a score of 3.1, followed by mental health care at 2.8, and gender-affirming care at 2.7. These trends were relatively consistent across the study’s four regions and reaffirm the status of HIV care providers as leaders in LGBTI+ health equity, but also highlight the need for more focus on mental health and services for transgender individuals.

The Fast-Track Cities initiative was launched on World AIDS Day, December 1, 2014, in Paris as a collaborative effort between IAPAC, UNAIDS and UN-Habitat. More than 350 organizations worldwide have signed the resulting Paris Declaration on Fast-Track Cities.

For a complete list of global cities and their data, go to the Fast-Track Cities Global Web Portal.