The six locations included in a global report on ending the AIDS epidemic Courtesy of amfAR, AVAC and Friends of the Global Fight

A report maps out four common factors that help these cities and countries beat the epidemic. [VIDEO]

A new report from global AIDS groups explores how six very different locations across the world dramatically lowered their HIV rates and mortality. In highlighting four common factors to these success stories, the report maps pathways for other places to beat the epidemic.

The report was released to coincide with the 10th International AIDS Society Conference on HIV Science (IAS 2019), taking place in Mexico City. You can watch the IAS press conference about data from the report above.

The report is produced by amfAR, The Foundation for AIDS Research; AVAC, which focuses on vaccines and prevention; and Friends of the Global Fight Against AIDS, Tuberculosis and Malaria. The 11-page report, titled “Translating Progress Into Success to End the AIDS Epidemic,” is published on EndAIDS.org, where it’s also available for a free download. The report includes timelines, policy highlights and graphics for each of the locations.

The report notes that the following common factors contributed to the success of the six locations in combating HIV: 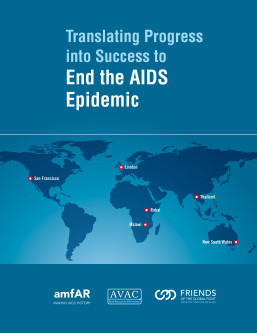 The cover of the global reportCourtesy of amfAR, AVAC and Friends of the Global Fight

“This report provides a new narrative,” said Chris Collins, president of Friends of the Global Fight, in a press release about the report. Ending the epidemic isn’t an insurmountable challenge but a question of putting the evidence to work and scaling access, particularly for those most at risk. It won’t be easy anywhere, but it is possible everywhere.”

“This report highlights the reality that progress toward ending HIV shouldn’t be limited by geography or demographics,” added Greg Millett, vice president and director of public policy at amfAR. “It also highlights how much easier we can achieve our goal by continuing to invest in scientific research as well as policies that promote human rights.”