Waiting lists may evaporate—for a few months—but the crisis ain’t over.

First the good news: As waiting lists in 13 states for AIDS Drug Assistance Programs (ADAPs) skyrocketed in July to a record 2,359 people, the Obama administration allotted $25 million in emergency funds to address the crisis. The money is expected to reduce—if not eliminate—waiting lists for ADAP, which furnishes HIV-related meds and extends insurance to those in need. Plus, Congressional subcommittees are recommending another $25 million for ADAP in fiscal year 2011, which begins April 1.
Now the bad news: It’s a temporary reprieve, at best. “I don’t think it’ll be long before we see waiting lists creep up again,” says Ann Lefert of the National Alliance of State and Territorial Directors (NASTAD). Florida, for example, is expected to keep adding about 400 people per month.

Although some folks on waiting lists scramble together access to treatment, others do go off meds, which can lead to drug resistance and fewer treatment options for the future. What’s more, adds Carl Schmid of The AIDS Institute, “Waiting lists are the tip of the iceberg.” Each state sets up its own ADAP eligibility requirements and benefits, though the money comes from the federal Ryan White program. States generally protect ADAP, Schmid says, so if a state cuts its ADAP and places residents on waiting lists, that means it has already slashed HIV prevention efforts, tightened ADAP eligibility and reduced the meds the program covers.

A June NASTAD report spells out why we’re in this ADAP mess. Demand is growing because more people are unemployed and losing health insurance. ADAP funds are shrinking because of state and federal fiscal crises. (Last year, states contributed 14 percent of the total ADAP national budget, which marks a 34 percent decrease from the previous year, and the federal government supplied 49 percent of the funds—the first time since 1997 that its earmark dipped below 50.) In addition, the nation’s efforts to test more people have led to more diagnoses. And then there’s the fact that HIV meds are working—which means more people are living longer and taking meds.

Tomorrow’s news: Health care reform will alleviate many problems—but that doesn’t fully kick in until 2014. For now, pharmaceutical companies are offering rebates and reduced prices to ADAP. Their rebates accounted for 31 percent of the 2009 national ADAP budget, a huge leap from 7 percent a decade earlier. Unfortunately, the newly announced National HIV/AIDS Strategy offers little in terms of resources. As both Lefert and Schmid say, if advocates don’t convince Congress to bolster HIV/AIDS money, yesterday’s news will repeat itself as tomorrow’s headlines. 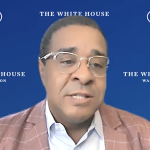