Generic Drugs in the U.S.? 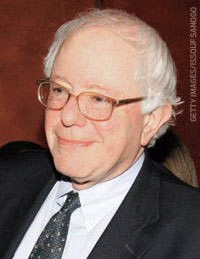 Antiretroviral HIV meds cost as much as $25,000 a year in the United States, but only hundreds of dollars in the developing world. Why? Generic versions of some HIV drugs are available internationally via the President’s Emergency Plan for AIDS Relief (PEPFAR) and other global health progams. With more than 750,000 Americans with HIV not getting treatment and given that part of the reason is cost, we need to make drugs affordable for the 30 percent of HIV-positive Americans who have no insurance. Waiting lists remain for AIDS Drug Assistance Programs (ADAPs); federally subsidized government funding for AIDS is under attack; and more and more states are cutting back on Medicaid.

U.S. Senator Bernie Sanders (I-Vt.) has proposed one solution. In May, Sanders submitted a bill to Congress to create a $3 billion prize fund for developers of new HIV meds. The money would be given in exchange for allowing a new drug to go generic right away, replacing the patents that currently keep prices high. At press time, the bill—the Prize Fund for HIV/AIDS Act—remained in committee.