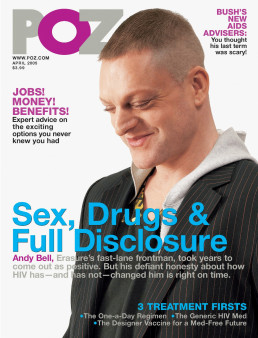 As far as pop-star AIDS activism goes, Erasure frontman Andy Bell is no Bono. But his recent announcement that he is HIV positive--and his brutal honesty here about blow, blow jobs and barebacking--is a start.

When Andy Bell, 40, revealed in a newspaper interview last December that he’d been diagnosed with HIV in 1998, I found myself reminiscing about a bar called, aptly, the Bell, that we both used to frequent in the mid-’80s. The Bell was on the fringes of London’s small but thriving gay scene. The boys wore Mohawks and quiffs and danced to a new edgy, arty pop: Joy Division, Cabaret Voltaire, the Human League.

Back then, I was in and out of various half-assed bands, and one day, I put an ad in a music paper for a singer. A tall, blond, swishy 19-year-old who called himself Dinger answered, and we met on a bench in Soho Square. He played his demo tapes: a bit too poppy for me.

The next thing I knew, the same lad was one-half of Erasure, a new duo formed by pop genius Vince Clark, formerly of Depeche Mode and Yaz. Over the next two decades, irresistible songs like “Oh, L’Amour” and “Chains of Love” propelled Erasure to platinum sales while their campily theatrical shows earned them a worldwide cult. Their new album, Nightbird, came out in January.

I was nervous about meeting Bell for POZ at his palatial home in the swank London suburb of Highgate that he shares with his lover of 20 years, Paul Hickey. We are strangers—yet have a shared history. But Bell greeted me with a warm, “Oh, I didn’t know it was going to be you!” and made me the ritual English cup of tea. He was exhausted from a recent flu, he said, which didn’t stop him from chain-smoking. He was still Dinger, a regular gay boy—uninterested in becoming an AIDS crusader, perhaps, but unafraid to tell the truth about how HIV has changed his life.

Gus Cairns: Let’s talk a little about the crowd at the Bell.

Andy Bell: It was fantastic down there. I felt so safe. I remember stealing people’s drinks, going around doing speed and that. I didn’t hook up with guys often there.

AB: I did have a fling with Peter the DJ.

GC: Peter Panic? Looked like a vampire? My God, I went out with his brother.

AB: Andy? He’s dead now. Along with a lot of others. Colin, the big fat doorman—loads of friends.

GC: Do you ever feel you should have done more about AIDS at that time? Elton John said recently that he felt ashamed for not having done or said anything about AIDS in the 1980s.

AB: Erasure did quite a lot actually. We talked about it on kids’ TV programs; we did loads of benefits. But I wasn’t a member of ACT UP or anything. You wouldn’t think it to look at me, but I’ve always been a bit of a wallflower. I’d hang back at gay pride marches because I was terrified of getting arrested. There are all these people who seem to like getting arrested.

GC: You’ve been very open about being gay—why did you wait six years to come out as positive?

AB: I was kind of persuaded to come out about it a couple of years ago, but I wasn’t ready or strong enough—and I didn’t want it to become the main thing about me. I love singing and performing. And there’s an incident that’s always been hanging over me. Before I was diagnosed, somebody stole my jacket at a club, and they were caught because they were using my credit cards. The police said, “Do you want to press charges against this guy? He’s got AIDS.” Like he was more of a criminal because he had AIDS. So I said, “No, just drop it.” And the next thing I knew, this guy had gone to one of the newspapers and said that I was his boyfriend and had given him AIDS, and they were going to run the story. Paul had to take a note from my doctor to the newspaper to say that I was negative—don’t print the story. But it was enough to scare me.

AB: It could have been, but you can’t tell, really. I’ve whored around the world! I’ve been thinking of getting into the leather scene lately.

GC: I noticed the hair was rather short!

AB: What’s left of it. I was thinking of trying out being a slave, but I think I’d be too manipulative! Anyway, I don’t like thinking about who I got HIV from. It really doesn’t matter.

AB: Well, for one, Paul is writing his book [a memoir that would reveal Bell’s status]. And in 2000, he had a stroke, and I suddenly felt very responsible, getting him through it.

AB: Yeah. I also had hip surgery [for avascular necrosis, a bone disease] last year. And I did rebirthing therapy and Reiki healing—I got a lot of shit out of my brain. So I just felt, clean slate. I’m not comfortable not telling the truth, and it’s taken this long.

GC: Were your hip operations HIV-related?

AB: Well, people with HIV can get avascular necrosis. It could also be related to cocaine use.

GC: You had quite a rock ’n’ roll lifestyle for a while.

GC: What was your biggest downfall?

AB: Cocaine. I had lots of health problems—shingles, hemorrhoids, thrush—before I ended up in the hospital in Majorca where I was diagnosed. But Paul and me were too stoned then to think of HIV.

GC: Are you still using?

AB: When I got the pneumonia, that put a lid on being self-destructive. Actually, I should be at my Narcotics Anonymous meeting now!

GC: How did Vince, the other half of Erausure, react when you told him you were positive?

AB: He’s been pretty close to AIDS. He had two friends, a bisexual couple, who, I think, were IV-drug users, and they both died of AIDS. He’s really not a panic person.

GC: Now that you’ve told the world, how do you feel?

AB: I thought it would be worse! I thought there’d be journalists outside and stuff like that, but not at all. I did get into trouble for telling the New York Post that I wanted to be positive. There was this uproar: “How dare you say that?” But back then, we lost so many people to AIDS, and there was nothing you could do about it. I didn’t want HIV, but I wanted to know what they had gone through. Do you know what I mean?

GC: I don’t—partially because I was diagnosed in ’85.

AB: That was early. God. Did you take AZT?

GC: Oh, yeah, AZT monotherapy, all that business. But I know people who were negative who saw so much grief and dying around them, they weren’t sure they wanted to hang around. Is that what you mean?

AB: Not that. It’s more that I sort of knew it was going to happen to me, but I also felt that I was going to be all right. It was the same way with my hips.

GC: How have your fans reacted to your announcement? On one site, a fan accused you of using HIV to get publicity for Nightbird.

AB: Well, that could be partly true, who knows? But our record company has always worked us pretty hard. But now they hold my hand and say “How are you? Are you all right?”

GC: But you started getting “the face.”

AB: Lipodystrophy, yes, so we stopped those.

GC: So now that you’ve said you’re positive, are you going to become an AIDS activist?

AB: Not really—I don’t know. We have done little things. We did a benefit in Hamburg for a German organization. Paul and I have given money to the Elton John AIDS foundation, and we auctioned off a week at our house in Majorca for the Desert AIDS Project in Palm Springs, Calif.

GC: You haven’t tended to do high-profile events, like Nelson Mandela’s AIDS concerts.

AB: We would, but we haven’t been asked. It just depends on the timing. Erasure make most of their money touring, so benefit concerts have to fit in with the tour schedule.

GC: You’re touring with Nightbird. I read that the title is a reference to your insomnia. Does HIV keep you awake?

AB: I don’t worry about my health. I worry about stupid things, like what to say in between songs at shows.

GC: What else have you got planned?

AB: I’ve got 18 songs of a solo album laid down, though that probably won’t come out till next year. And me and Vince have done an acoustic album with violins and slide guitars and things, more jazzy or countryish.

GC: It’s been 20 years since you started Erasure.

AB: The world’s changed a lot. You know the change I like least? I hate how pornographic videos are [gestures at the TV, which is tuned to MTV]. It’s being peddled to young kids. And I think it’s done on
purpose to keep everyone from thinking about politics.

GC: People’s attitudes toward sex are so polarized. I mean, telling teenagers to abstain from sex at the same time as those images are going out! What do you think the answer is in terms of HIV prevention?

AB: I was scared by the Thatcher government’s TV ads about AIDS in the ’80s, but it didn’t last long. Scaring people into submission backfires in the end. I like to think that, in a way, we’ve survived the AIDS crisis. It’s not the time for doom and gloom. It’s time to celebrate.

GC: What do you think about the barebacking phenomenon?

AB: It’s quite sexy in a way, isn’t it, the whole risk factor. I’ve been up-front with guys about my status. They’re still like, “It’s fine.” But I don’t advocate barebacking. It’s fine with a consenting partner, but not if you’re going out and screwing willy-nilly.

GC: When was the last time you came across someone like that?

AB: Before Christmas at the LA3.

GC: Oh, God, you still go to that club? I might have gotten HIV at that place.

AB: Who knows where we got it? The number of blow jobs I’ve given in club toilets!