David France’s new film about the history of AIDS treatment activism lit up the Sundance Film Festival—and hopes to inspire a new generation of HIV activists. 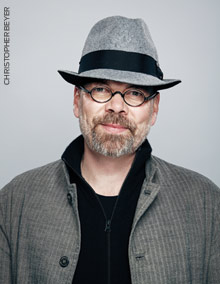 David France, a renowned journalist who has covered the AIDS epidemic from its earliest days, has written for New York magazine, Vanity Fair, GQ, The New Yorker, Rolling Stone, Newsweek and The New York Times Magazine. He also writes books. Our Fathers investigated sexual abuse in the Roman Catholic Church. The Confession is the ghostwritten autobiography of James McGreevey, the former New Jersey governor who came out as gay when he resigned in the face of a sexual scandal.

After decades of storytelling with printed words, France became a first-time filmmaker with How to Survive a Plague, a documentary about the history of HIV treatment activism. It debuted in January at the Sundance Film Festival and was picked up by Sundance Selects for distribution this fall.

He is currently on leave from journalism to translate the film’s story into an in-depth book exploring the history of HIV treatment activism. Here, France shares what drove him to make the film and pen his newest offering.
Why did you make this film?
The idea was developed in late 2008 over lunch with my editor at New York magazine. I recognized that almost all of the cultural work produced around AIDS focused on the arrival of this mysterious virus, the suffering it has caused and what the community did in response to this mysterious viral intruder. All of the heroic efforts that were undertaken to transform the way health care is practiced and delivered, not just in America but around the world, had gone unaddressed culturally. My mission was to see if I could tell the story of successfully battling back against this viral threat.

I thought to do it as a documentary. I remembered all of those video cameras throughout the community’s response to the crisis. People captured for posterity what was going on behind the curtain. I thought that I could find enough information in that archive of independently produced footage to tell a narrative.

I worked on it for two years doing archival research, video preservation and the editing and production. The finished documentary is a vérité presentation of what [the AIDS world] looked like, what it sounded like and what people were thinking and feeling from 1987 to 1996.

AIDS activism belongs in the canon of the great civil rights movements. It ranks as one of those heroic, historic achievements. That it had not been put there was surprising and certainly an oversight, so I wanted to address that.

I lost my lover to AIDS in 1992. The movie has allowed me to re-experience that loss in a way that has been important to me. I’m HIV negative, but we all have an AIDS story.

We all have trouble finding a way to carry that memory. For me, it was helpful to remember what those days were like. It was remarkable the amount of terror we lived under. It’s no surprise that people like to move beyond that because it was such a hard period.

I see How to Survive a Plague as a chronicle of the second half of the plague years—a sequel to And the Band Played On [the book by Randy Shilts].

How did you make the film?
[I started with the] AIDS Activist Videotape Collection at the New York Public Library curated by Jim Hubbard, the leading archivist for this work. He’s one of my associate producers on the film.

A small part of the footage [used in the film] was found there. I went through the tapes to identify other people carrying cameras and sought them out. I would bring in their private collections and look for more people with more cameras.

Sometimes I would identify people with cameras who had died of AIDS. I tried finding their estates, their lovers, their families. Remarkably, every time I looked for the footage, the people had kept it. Everybody knew the history that they had witnessed.

Video is a very unstable medium. The footage was at the very end of its shelf life. Ultimately, I brought in 33 collections and reviewed over 700 hours of footage.

What was it like making your first film?
It was exhausting! It was much more work than I thought [it would be]. We bit off a ton, and we were working long days, seven days a week, trying to find the perfect movie in all of this footage.

It’s hard work for an archivally based film to digitize old footage. There was a lot of restoration to make it look and sound right. We didn’t finish until four days before we premiered at the Sundance Film Festival. It was more nerve-racking for [festival officials] than it was for us.
Tell us about some key people in the film.
The stars include Mark Harrington [who is now executive director of the Treatment Action Group], [AIDS activist] Jim Eigo and Iris Long, PhD, [a heterosexual pharmaceutical chemist] who is the inventor of treatment activism. She is one of those amazing historical wrinkles—without her, [AIDS treatment activism] could not have happened.

The two people the audience gravitates to most are [AIDS activist] Bob Rafsky and [AIDSmeds founder] Peter Staley. They’re both articulate and handsome. Staley was this unlikely AIDS warrior, a bond trader with an unchallenged future and suddenly he had HIV. You can’t tell the story without him. He used the way an audience responds to him to help gain attention to this battle. He used it on television, which meant that there was a lot of footage [of him], and he hasn’t lost his sway over an audience.

What happens now with the film?
We’ll spend the next several months doing festival premieres. In the fall, we will have our commercial run and Sundance will bring us to theaters across the country. It’s still to be determined if the film will air on television.

I think that we are going to get some great theatrical exposure, and that’s where we will find our largest audience. That’s exciting. When was the last time that an AIDS documentary got a big theatrical rollout? I can’t think of a time.
You’re writing a related book?
Yes. The book covers the same time period [as the film] and will be out in 2013. It allows me to travel into the world of the pharmaceutical companies’ efforts against viruses in general and the [specific] scientific research, which brought us the three-drug combination [of HIV drugs].

[The search for AIDS drugs] was a period of tremendous transformation in the drug research world. AIDS treatment activism changed it. It will be a historical look at the scientific changes in that period.
What do you hope the film will achieve?
To make sure that people know what happened. [Many audiences are] shocked that there was ever a period when there weren’t AIDS medications.

People see it as a film about activism itself, as a kind of primer and call to arms for activism [in general]. Maybe it will be received in a way that’s more universal than just being an epic story about how a virus was ultimately tamed.

Hopefully, the examples of the people that animate How to Survive a Plague will encourage a new generation of HIV treatment activists. [Now that treatment exists] the essential challenge is to ensure access to the drugs.