That’s What Friends Are For

Dionne Warwick reprises her role as an AIDS activist.

Early in the epidemic, iconic singer Dionne Warwick lost her valet to AIDS. Thus began her involvement as an HIV/AIDS advocate—a role that led her to be a U.S. Ambassador of Health focused on ending AIDS. Today’s rising HIV infection rates and deaths around the world have re-engaged Warwick in the fight. Recently, she participated in a town hall meeting in Harlem, New York, about HIV. The woman who once got President Reagan to utter the word “AIDS” wants to get everyone talking again about the pandemic. 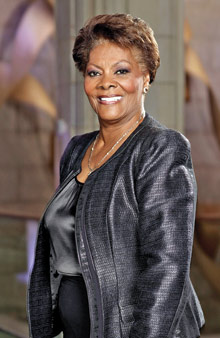 Do you remember where you were when you first heard about HIV?
I remember it vividly. I was at home watching television, and this documentary came on about the young man who was the first one discovered [in the United States] to have the disease. He was an airline steward. The two-hour special tracked his life from the time he got off that plane and came back stateside until the day he passed away. [He went] from a robust, healthy, good-looking young man to skin and bones and everything in between. We saw how he was ostracized—nobody wanted to speak to him or get near him because they didn’t know what this sickness was. Everyone claimed it was cancer.

As time went on, we were rapidly losing people like him in our industry—dancers, sound men, camera men, makeup people, hairdressers. The entire [entertainment] industry was fighting this nameless disease. Then my valet, Marvin, passed away from AIDS. Everyone thought Marvin had cancer.

There was still no name to this illness. It was a very scary situation. The disease started killing a lot of people around the San Francisco area. It was designated as a gay, white, male disease, which we all found out was not true. It became apparent that something had to be done. I stumbled about and started asking doctors and nurses and other caregivers what this disease was. Nobody could answer me because they didn’t know. I guess my voice was loud enough to carry it to Washington, DC. During this period, I was appointed a United States Ambassador of Health by the Reagan Administration [I continued that role through the first year of the Clinton administration]. I promised myself I’d put my position to great use.

How did you get everyone together in 1985 to record “That’s What Friends Are For”? The song raised more than $3 million for amfAR, the Foundation for AIDS Research.
That was fairly easy, actually. Stevie Wonder was flying in from New Jersey one evening [and I asked him]. Stevie was a very good friend. And then I picked up a phone and called other friends [Gladys Knight and Elton John] and said, “Hey, I need this.” All they asked was, Where and when.

Today, some people have classified HIV as a black disease, and the virus is indeed devastating the African-American community. What are your thoughts?
I would not consider HIV/AIDS as just a black disease. This disease has no race, color, creed, nationality or gender. It doesn’t matter who you are. This is a disease that attacks everyone. Those who call HIV/AIDS a “black disease” show us we still have a lot to learn, which is why my advocacy will always stress education. You have to know what you’re battling before you fight it. I’ve traveled the entire world for almost 35 years on my dime. Though I was the U.S. Ambassador of Health, I paid my own way to Ghana, Johannesburg, Sweden, Italy, France and Spain. All those countries had HIV epidemics but denied it. When I went to Africa the first time, the epidemic [in Ghana] was probably the most devastating thing I’d seen in my life. HIV/AIDS was ravaging [the people]. Then, it finally dawned on me. This wasn’t a gay, white male disease. In Ghana, babies, women, little boys and girls, and grown-ups all had the virus.

When I came back, I pointed my finger and wagged it in President Reagan’s face and said, “There is something going on in these countries, and it ain’t going on only over there; it’s going on right here too. And we have to help find out what it is.” This was a man who would not say the word “AIDS.” I made him say it. I made him say it at a press conference at the United Press Club. He was honoring me and saying how proud he was of the work I was doing. And I said, “And what am I working on, President Reagan, that makes you so proud of me?” After he stammered and turned red, he said, “AIDS.” I said [to myself], “Oh, you can say that can’t you?”

Did you think science would ever find a way to help people manage or cure HIV?
Although science has played a very important part in developing HIV/AIDS medications and treatments, we haven’t found a cure yet. Scientists are working very hard, but I think we still have to keep people’s awareness level up. It’s an ongoing battle.

Last year, the White House debuted the National HIV/AIDS Strategy, the first domestic coordinated effort to fight the epidemic. Why do you think it took so long?
Bureaucracy and red tape. It’s unfortunate that sometimes addressing a problem does take longer than we hope. But the fact is they’re still working on solutions. As long as they continue to do that, we’ll just have to wait.

Despite scientific advances, HIV stigma remains very real, and it affects whether people get tested and disclose their status. How do you feel about that?
That goes back to education, and it makes you realize that there must be continued testing for this disease. Education provides people with vital information. But I think people are starting to realize that a simple test can help save their lives.

You’re one of the first African-American celebrities to really come out as an activist and an advocate for HIV/AIDS awareness. Were people upset with you?
It had gotten to the point where people refused to touch others out of so much ignorance and fear. I was also unaware. It wasn’t until I educated myself that I learned how HIV was contracted. No one was afraid to touch someone with cancer. No one was afraid to touch someone with any other catastrophic disease. People were so afraid of AIDS; it was shameful how they treated [those living with the virus].
You were an advocate at a time when it was not very popular to be one, and many people feel that you have not received proper recognition for this. What do you think?
I was always concerned about this disease, and I still am. It doesn’t matter where or when the cure happens as long as it happens. And it doesn’t matter who gets the credit for it. Whoever it is, OK, give them the credit. [It doesn’t matter if my work is recognized] as long as this disease is eliminated. I still feel that way.