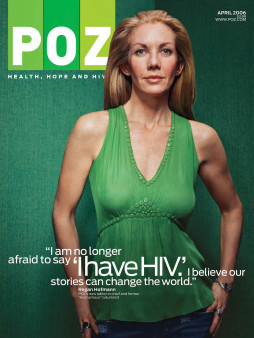 Well, I finally did it. After threatening for four years (in my “Anonymous” column in the pages of this magazine) to disclose my status—I now stand before you. Please allow me to introduce myself: I’m your new HIV positive editor in chief (yes, that’s me on the cover). After living in secret for nearly a decade, I decided it was time to share my status and my story with you.

Why now? Because there’s a real need for positive people to be visible—AIDS needs to be in the spotlight again. In his speech on World AIDS Day last December, POZ founder Sean Strub alerted us to the dangerous decline in our influence and voice, particularly within the AIDS service organizations (ASOs) founded by people with HIV to protect and serve us. (Missed his speech? Read it on POZ.com.) I’ve always had tremendous appreciation for the work of AIDS activists of the ’80s and ’90s. Lately, their good work is being undermined. Changes in the Ryan White CARE Act, ADAP budget cuts and the Christian Right’s dangerous obsession with abstinence-only HIV prevention upset me. Awareness and prevention efforts in this country are not where they should be: AIDS is a preventable disease, yet last year there were more than 40,000 new infections in the U.S., including higher numbers of women and people of color than ever before. Not to mention that the stigma surrounding the disease, even after a quarter-century of education efforts, is still so severe that many with HIV feel they have to live in shame and secrecy.

Despite my desire to speak out, my temptation to remain silent was huge, right up to the moment I made my final decision. (After all, it’s one thing to disclose anonymously and another thing to put your name and face on a magazine about AIDS.) I liked feeling and being treated like a perfectly healthy person. But hearing too many times what people really think about HIV/AIDS and the people who have it—a frightening reality—inspired me to tell my tale and the truth of HIV.

From the moment I first read POZ in 1996, it empowered and inspired me by connecting me to the HIV/AIDS community and giving information I found invaluable when making decisions on how best to live with the disease.

POZ’s tradition of editorial excellence will be enhanced because we recently joined forces with AIDSmeds.com, one of the world’s most reliable sources on HIV/AIDS (stay tuned for more exciting news about AIDSmeds.com in May). Like Sean, AIDSmeds.com founder Peter Staley is HIV positive and a highly respected AIDS activist. Together, they helped establish an empowered AIDS movement. It’s an honor to be asked to help them with their ongoing mission—found in the pages of POZ and at both POZ.com and AIDSmeds.com. Fortunately, I have their help, as well as an outstanding staff.

As with many difficult things, it’s easier to turn away from the truth of HIV than it is to face it. But looking it square in the eye is the first step in beating it, and that goes for society at large as well as for every person with the virus. Here’s to continuing the fight.