The doctor who diagnosed the first AIDS cases reflects on 30 years of the epidemic.

Michael Gottlieb, MD, is a physician and immunologist. He was the lead author of the first public account identifying AIDS, which was published in the Morbidity and Mortality Weekly Report (MMWR) by the U.S. Centers for Disease Control and Prevention (CDC) on June 5, 1981. That date is now regarded as the beginning of the epidemic.

Thirty years later, Gottlieb continues to treat people with HIV. Here, he shares his early experiences fighting the virus, the changes he has witnessed in the course of the disease and his predictions for the years to come. 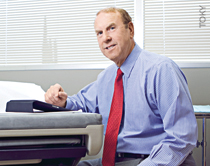 How did you come to write the piece in the MMWR?
In January 1981, I was asked to see a patient for an immunology consultation in my Los Angeles practice. He was a 31-year-old gay man with a fever and weight loss. He also turned out to have Pneumocystis pneumonia. He had almost no CD4 cells. I’d never seen anything like his case before.

Word trickled out into the medical community that I was seeing this patient. Colleagues referred three more patients who were essentially carbon copies. Now we had four men and were convinced that this was something that would become more common.

[My colleagues and I] contacted the editor of The New England Journal of Medicine, who advised talking to the CDC. [An official] assigned from the CDC to the Los Angeles County Department of Public Health was unaware of anything unusual in the local gay male population. He checked with the CDC, and they were not aware of anything nationally.

At that point they invited us to write the MMWR report, which was titled “Pneumocystis Pneumonia—Los Angeles.” Doctors all over the country started telling me about additional cases and asking for advice about how to manage them.
What was it like being Rock Hudson’s physician?
In 1984, I got a call from a dermatologist in Beverly Hills who asked if I would come see a VIP patient of hers at her office. That’s when I met Rock Hudson. He was a very pleasant person, a very nice guy. I had to take special measures to protect his confidentiality.

When I first met Hudson, I had no way of knowing that his diagnosis would ever go public. He went to Paris [for treatment] and then returned to Los Angeles when we made an announcement of his condition. Rock Hudson’s disclosure led to a more widespread awareness that we were in the midst of an epidemic.

Even today there are still celebrities with HIV who hesitate to share their diagnosis because of stigma and fear that it’s going to ruin their careers. There are still prominent people with HIV who die whose obituaries never mention HIV. I wish people would be more open.

After 30 years, what fuels your work as an HIV physician?
An HIV diagnosis was once considered a death sentence. Today after a diagnosis, life is never the same, but people are much less panicked. They know there is treatment available. Today results can be outstanding, which is a far cry from what happened 30 years ago or even 10 years ago.

To see [progress around an] illness like that is an accomplishment for the field and personally gratifying.

At the beginning of the epidemic, what kept me going was the lack of anything to treat HIV and the prospect that something useful might be developed to control the infection. AZT gave me hope that we might find another drug or combination of drugs that would control it.

[The field of HIV care] is always changing. It’s the most exciting area of medicine. I have had people say to me, “What you do must be so stressful.” People who are not involved in AIDS think this is a gloomy business, but I enjoy what I do.


I like not just the technical aspect of medications, but also the overall care of my patients from an emotional and physical perspective.

You also treat people for hepatitis C. How does hep C, another RNA virus, compare with HIV?*
Hep C is today where HIV was 19 years ago in terms of being on the verge of an explosion of new treatments. Issues of tolerance and resistance are the same ones we as HIV physicians have dealt with over the course of the last 15 years.

People who treat HIV are very well qualified to deal with those issues. They just have to get up to speed in terms of understanding the hepatitis process.

Hep C and liver disease in general are now some of the leading causes of morbidity for patients with HIV. Our objective [for those who are coinfected] is to manage or eradicate their hep C so that their liver disease isn’t the cause of their premature deaths.

For those who are coinfected, the new drugs soon hitting the market will have some toxicities, such as rash and anemia, that are going to be a challenge to manage. However, I think we can work through those toxicities.
Tell us about the Global AIDS Interfaith Alliance (GAIA). You’re a board member.
As things were improving here in the United States, things were getting worse for people with HIV/AIDS in developing countries. I hadn’t done anything in the international arena and felt very badly about that until I went on the board of GAIA in 2006.

GAIA was founded in 2000 to provide services for people with HIV/AIDS in Africa. They started with Malawi, one of the poorest countries in Africa. At the time, there was limited outside involvement in Malawi addressing HIV/AIDS.

They currently give stipends to village women to help ensure their economic independence. In return, those women provide care for village orphans and provide HIV/AIDS education and sexual health education. GAIA also provides HIV testing with mobile clinics.
What do you see happening in the next 30 years of AIDS?
Let me get out my crystal ball. HIV is going to continue to be on the front burner. The pace of the epidemic may be slowing, but there is still a lot of HIV transmission, particularly in developing countries.

The disparity between HIV in Western countries and developing countries will continue to be embarrassing and morally problematic. In the absence of a vaccine, the approach known as “test and treat” will be tried in the developing world. [Test and treat advocates for large-scale testing, then getting people on treatment if they’re positive, thus preventing transmission of the virus.] In the United States, the epidemic will continue to spread among the poor, people of color, IV drug users, gay men and in the South.

In the next 30 years, a high priority has to be neutralizing the stigma associated with HIV. Stigma is very much alive. [Reducing] it may take time, but it certainly would help people who are HIV positive to be more open about their status and to see a reduction in the discrimination that [often] occurs when they disclose.

*This sentence has been revised to reflect the following correction: Hepatitis C is a RNA virus, not a retrovirus.