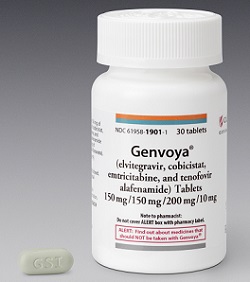 TAF has been shown to be less toxic to bones and kidneys than TDF. Because TAF enters cells more efficiently than TDF, a lower dose is required and 91 percent less of the tenofovir winds up in the bloodstream, where it may lead to toxicities.

Genvoya is intended as a complete regimen for HIV treatment in adults and adolescents 12 and older. Those who take the tablet should either never have taken antiretrovirals (ARVs) before or have been virally suppressed for at least six months on a different regimen and never have experienced treatment failure or drug substitutions associated with resistance to the medications included in Genvoya.