For some people, living with HIV can mean working extra hard to have a healthy heart.

Kim Hunter, a 50-year-old counselor at Hyacinth AIDS Foundation in New Jersey, has vastly improved every aspect of her life—except her heart health. In the past 13 years, Hunter, who was diagnosed with HIV in 1988, has completely reinvented herself. At one time, she was a heroin addict who served nine years in state prison. Today, she is a college-educated, clean-and-sober counselor and mentor to other HIV-positive folks with similar lives and histories. 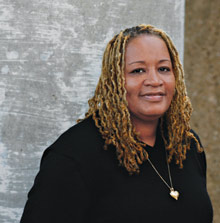 “If I can help someone else by sharing a little bit of my journey, that’s a good thing,” Hunter says in her deep, in-control voice.

Her turnaround has been nothing short of remarkable. The armed robbery that landed her in prison in 1989 was an attempt to get drug money. But once behind bars, she not only got sober—she also got her GED. Upon release, she worked at a series of human-services jobs, and now she carries the title Manager of the Office for Women’s Health at Hyacinth.

But there is one aspect of life Hunter just can’t get under control. It’s not her HIV, which has been well managed on meds for many years now. It’s her lipids, the blood fats that can signal our risk of heart disease and heart attacks. For years now, Hunter’s lipid labs have been less-than-stellar. Three months ago, her triglycerides were 160, when less than 150 is ideal. Her HDL, or “good” cholesterol, was 36, when the ideal is 60 or higher. Her LDL, or “bad” cholesterol, was 114, when the ideal is below 100.

Why the mediocre grades? Hunter, who is 5’5" and weighs 197 pounds, admits she doesn’t exercise regularly. She and her life partner—Donna Smith, a social worker—eat mainly healthful foods such as chicken and fish, brown rice, vegetables and salad. But “I do like peanut-butter crackers, black cherry soda and the occasional T-bone steak,” she says. Plus, Hunter has hepatitis C, which also increases the risk of cardiovascular disease. (It’s important to note, too, that heredity plays a role in weight, making it harder for some people to trim down. It’s not all about will power.)

Hunter concedes she needs to confer with her doc about possibly taking a cholesterol-lowering statin drug. New research suggests that’s a good idea: A study released this past October, published online by PLoS One, found that HIV-positive folks with both a waist size and triglyceride count above certain cutoffs (see “Measure Up,” right) were at higher risk for cardiovascular disease than their HIV-positive peers with no more than one of those numbers above the cutoff.

Another big problem? Hunter smokes about a pack of cigarettes a day. She knows there are resources out there to help her quit, including the patch, nicotine gums and lozenges, smoking-cessation groups—even e-cigarettes (though such vaporizing nicotine-delivery devices remain controversial). “I was referred to a program, but I never followed up,” she says, admitting that she’s loath to quit. “I’ve given up everything else. But I would say it’s very uncomfortable to be a smoker when I’m counseling people all day on health and wellness.”

Other than that stubborn habit, Hunter says, life is pretty good. Besides her fulfilling job, she and Smith just went on a cruise to celebrate her Big 5-0. They have a time-share in the Poconos. And they are die-hard Yankees fans. (Hunter cheers on Granderson and Cano; Smith likes Teixeira and Jeter.)

With a little prodding, Hunter has come up with a four-point plan to improve her heart health, including improving communication between her HIV doctor and her primary doc, considering going on a statin, finding a fun exercise plan to bring her weight down and giving the smoking-cessation program a real try.

“I have to start taking care of me first before I take care of others,” she says.

How To Preserve Your Heart Health

IT’S BETTER TO BE ON HIV MEDS. True, some HIV meds are linked to higher cholesterol levels. But research shows that, overall, people who go off their HIV meds have higher heart risk than those who stay on. “That’s likely due to the inflammation caused by unsuppressed HIV,” says HIV-cardio expert James Stein, MD, of the University of Wisconsin Department of Medicine. If your cholesterol level worsens after starting HIV meds, talk to your doctor. You could tweak the regimen, or you could…

CONSIDER TAKING STATINS. These drugs have proved remarkably effective in correcting cholesterol counts. Some interact negatively with HIV meds (for example, Zocor/simvastatin and Mevacor/lovastatin interact with  protease inhibitors). But HIV doctors are prepared. “We tend to use low doses of Lipitor [atorvastatin] or Crestor [rosuvastatin],” Stein says.

QUIT SMOKING—PERIOD. Even one cigarette a day triples your risk of heart disease. Yes, it’s hard. “The average person tries to quit five to seven times before [succeeding],” Stein says. “Plus, it’s easier to do it in a group.” Google and call around to find one near you. (You can also discuss with your doc drug options like nicotine gum and patches—generics tend to be a bit cheaper than brand name products—and pills such as Zyban/bupropion and Chantix/varenicline.)

BREAK A SWEAT. “Find some activity you actually enjoy and do it between 30 and 60 minutes, five times a week, to the point where you break at least a light sweat and can talk while doing it, but not sing,” Stein says. “Go to a gym or do something at home or outside.”
TWEAK THE DIET. Increase fruits, vegetables, lean proteins such as chicken and fish and whole grains like brown rice and oatmeal—and reduce anything fried, greasy, fatty or sugary. “Don’t go to the supermarket hungry, and hit the fruits and vegetables first,” Stein says. “Make sure half of your plate is fruits or veggies, a quarter protein and a quarter whole grain.” Many HIV clinics have dieticians or nutritionists to help you draft a plan.

How To Measure Up

Next time your doctor gives you a triglyceride count, also ask to have your waistline measured, too. “It’s not commonly done, but it’s easy,” says Marshall Glesby, MD, an HIV researcher at Weill Cornell Medical College in New York City.

If you’re over the healthy limit, strategize  with your doctor about ways to trim abdominal girth and use diet and possibly meds to control triglyceride levels. 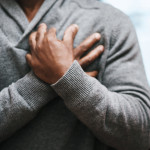