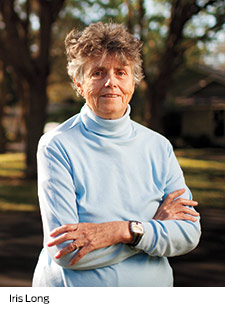 When Iris Long first learned about AIDS, the disease was so new, it didn’t have a name. The topic came up during a lecture on skin diseases while she was engaged as a postdoctoral fellow in the department of immunology at Stony Brook University in New York. In the late 1980s, after reading reports about AIDS and going to local New York City AIDS meetings, Long worked the hotline at Gay Men’s Health Crisis. Soon, she joined ACT UP (the AIDS Coalition to Unleash Power) and introduced the notion of treatment activism to the grassroots movement.

As a retired pharmaceutical chemist, Long, who is HIV negative, was able to provide the activists and AIDS community with much-needed information about clinical trials and potential treatment drugs. Her work with ACT UP was recently featured in the Oscar-nominated film How to Survive a Plague. Says Long of her contribution: “I wanted to help people who were infected—and those who weren’t—learn more about AIDS. At that time, there was a great need for information by the gay community.”

That information saved the lives of millions of people living with HIV. We offer our eternal gratitude, and we asked her a few questions:

What three adjectives best describe you?
Concerned, inquisitive and determined!

What is your greatest achievement?
My AIDS work, which is largely based on the 11 years of knowledge I obtained at New York’s Sloan-Kettering Institute.

What are your greatest regrets?
I regret the suffering that people endure whatever their disease, and also I regret the toll it takes on caregivers. Unfortunately, there is little help for caregivers, who often make great sacrifices to help their loved ones.

What keeps you up at night?
In 2013, HIV/AIDS still remains a threat. HIV infections are not adequately controlled anywhere in the United States or the world. Treatments to cure AIDS and vaccines for people who are uninfected remain works in progress.

What must still be done?
There needs to be continued education and expansion of AIDS prevention programs and treatment research worldwide. And it’s important that caretakers get help. They are unsung heroes.