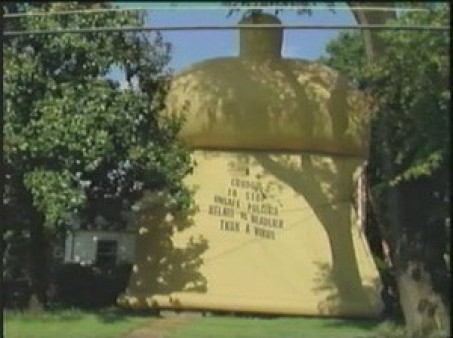 When the Treatment Action Group put a giant condom over Jesse Helm’s suburban Washington home, I wish Helms had been in it and suffocated.

I’ve never met Helms, but since he’s put so much energy into making my life difficult, I think I have the right to hate him. I wish I had the right to kill him. Ideally, to inflict a lingering death. But I would settle for a quick, sure thing. Like five or six rounds right into his chest. Watching him bleed to death would be one of my life’s high points, way up there with eating chocolate cream pie or wrestling my boyfriend to the ground. A primal feeling of satisfaction.

I know I sound psycho, but the way I see it, I’m entitled to some joy in my life. With my T-cells at 19 and my viral load at 500,000, I need goals that give me pep and vigor. Helms’ career spent vilifying and destroying the lives of people with HIV fills me with a terrible rage. That rage percolates day after day. No amount of activism makes it go away.

My entire life I’ve been an alien with strange desires and a worldview few others understand. There must be others out there like me -- my tribe must exist -- but I don’t know how to find them. Because I can’t verbalize why I feel different, I try to show it. In high school, I wore purple tights; in college I had a Mohawk. Today, at age 30, I have green hair. My extreme looks are like sending out a flare, hoping others like me will find me.

This is a scary process, and Helms represents the ultimate negation of it. He demonizes anyone different. He says because I’m different, I deserve to die from AIDS.

In seventh grade, a boy named Chris tortured me. He would grab my Mead Organizer notebook and send it flying in the air. The whole class would laugh, and eventually I laughed, too. Well, I’m no longer willing to laugh along with my oppressors. I’m not even willing to tolerate them. I don’t want a dialogue with them; I don’t want to change them. I want to terminate their existence.

Helms’ violent, bloody death would shock the world into understanding my rage. Helms isn’t just killing a million Americans with HIV, he’s trying to homogenize the whole society, snuff out any individuality that exists.

I don’t even own a gun. Heck, I’ve never even fired a gun, although in Boy Scout camp I was taught how to fire a rifle. I was a pretty good shot back then -- able to blow the skeet target out of the air three out of four times, despite the recoil knocking me to the ground. If my fantasy plot succeeds, there will always be a little place in my heart reserved for those gun-toting Republicans who taught boys like me how to kill at such an early age.

I hope my 10 arrests at AIDS demonstrations don’t show up on a background check and prevent me from buying the gun. It’s not as though they reflect a violent past (if you ignore the two that were for assault and battery of a police officer). If I can’t get a gun legally in New York, I can always take a drive to Texas, where they practically give the things to you as you cross the state line.

Some people think it would be better to inject some of my blood directly into Helms. Let him experience the joys of HIV. But I disagree. What if these new triple drug combinations really can eradicate the virus? I’d hate if Helms were the subject that proved they work.

I don’t think I’m clever enough to escape so I have to be prepared to spend the rest of my life in jail. So I want to make sure I’m on my final decline when I pull off the action. It’s a tricky balance, really: Sick enough to not have much to lose, strong enough to ensure my success. If I’m blind from CMV, I’d have a hard time getting him in the line of sight. Or if I’m taking amphotericin B, it could cause me to shake like crazy. Maybe wiring myself to a bomb would make more sense. But then I wouldn’t be around to watch the aftermath.

Thinking rationally, killing Helms doesn’t seem like the greatest of ideas. Still, there is something exciting about striking fear into the hearts of homophobes.

What killing Helms is really about is taking charge and no longer accepting the role of victim. As empowered as I am, I still experience much of my life as held hostage by HIV and people like Helms. HIV is a terrorist’s bomb lurking in my body, and I never know when it’s going to blow something up. And Jesse Helms is the one who keeps trying to light the fuse.