Why Folks With HIV Can Be Excellent Transplant Recipients 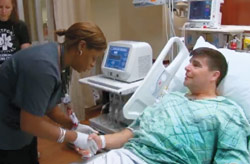 Gulf War veteran John Rankl is a true American hero. He served his country not only in the military, but also on prime-time television. Appearing on  a July episode of the ABC medical documentary series NY Med, Rankl inspired and educated millions by sharing that he was openly gay, HIV positive and in dire need of a heart transplant.

The episode opens at the New York-Presbyterian Hospital, one of the nation’s few programs, we are told, that offer transplants to positive people. When we meet Rankl, a doc says that if he doesn’t have a transplant soon, he’s going to die.

Luckily, a donor heart becomes available. Rankl is prepped for surgery, but a mishaps occurs: The organ is damaged, and the operation is cancelled.

Rankl changes to Hartford Hospital, where Jonathan Hammond, MD, says that Rankl will be the transplant center’s first HIV-positive patient. “It’s going to take a while for everyone to adjust to the concept,” the surgeon says, because the misperception is that people with HIV are going to die, so why transplant them instead of a negative person. “Actually,” Hammond explains, “[Rankl] is perhaps a better transplant candidate than people who haven’t shown that they have the discipline [needed] to survive with a heart transplant.”

Studies—particularly of liver and kidney transplants—are also proving that HIV-positive recipients can do as well as their negative counterparts. Good news because people with HIV are living longer—and are in greater need of transplants. (Federal law forbids people with HIV from donating organs—even to other positive people.)

The NY Med episode closes nearly four months after the transplant, as the Rankl family celebrate his new start. “Even my doctor is amazed at how well I’m doing,” he says. “It’s great to be alive.”