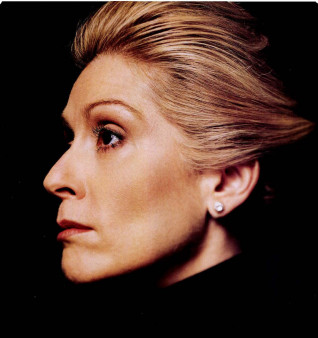 On an absolutely perfect Sunday afternoon on Manhattan’s Upper West Side (the sun is shining, my friends are smiling), Judith Light’s name is once again mentioned. Talking with pals about Hollywood’s response to the pandemic, they immediately start speaking in glowing terms about their friend Judith Light, star of the long-running television sitcom Who’s the Boss? and I am incredulous. Judith Light an AIDS activist? Really? It can’t be a coincidence that every single person I talk to in relation to our Hollywood and AIDS issue -- activists, industry insiders, her fellow actors -- invariably mentions Light’s AIDS work. Their tone is nothing short of reverent.

In our talk, Judith Light focuses on Hollywood’s take on AIDS, the Clinton Administration’s response to the crisis, the work that is left to do and how the world should acknowledge and follow the heroic example set by the gay community’s galvanization against the formidable foe.

At times passionate and angry, her voice rises and falls as she recalls friends who have passed, ponders people who don’t show compassion and imagines a world without AIDS. When asked why she has taken AIDS as her issue, Judith Light is blunt: “I’m losing my friends. There’s a very real epidemic out there that is preventable and I will not sit by passively and watch my friends die.”

And so she doesn’t.

Judith Light: When I did The Ryan White Story television movie, that’s when I really felt the connection with AIDS. Working with GMHC, something really clicked. I decided that there’s an epidemic out there and I wouldn’t sit passively and watch my friends die. They are my family. I don’t want to be a Pollyanna, but when we’re not paying attention and caring about these people who are dying, we are not pulling our own weight. I’m losing my friends and I feel an emotional connection to people who are putting themselves out there in the world, people who are making a difference. No one should suffer and be rejected in this world.

RPF: What is Hollywood doing to show the public the faces behind AIDS?

JL: A Day of Compassion has gotten AIDS stories on soaps and sitcoms. There are some producers who want to do some things others don’t want to see. We [people fighting against AIDS] want to see it all the time, but that’s not the way to deal with people. We can’t expect everyone to feel the same way we do.

RPF: What about the rest of Hollywood on AIDS?

JL: I can’t compare myself to anyone else. I have a connection to AIDS. That’s me. If other celebrities don’t feel they need to be in the fight against AIDS, they don’t need to be there. Other people take different issues. For me, being a celebrity is being in a service business, and I wanted to give in another way and, as I said, I was connected to this. There are a lot of celebrities that are doing a lot that few people know about. You would be surprised at what AIDS work in Hollywood is being done and you don’t know about. There are a lot of compassionate people in the Hollywood community who don’t do the things they do just to get the press. More is being done than we know. There are organizations everywhere. People like Dan Butler, my husband, are out there working. And David Geffen and Sid Sheinberg and Barry Diller are all doing what they can.

RPF: What about those people? Some activists argue that Hollywood’s powerful moguls are not doing nearly enough to battle AIDS.

JL: You can always do more, but it’s important to keep the movement alive by focusing on what is happening and what people are doing. It’s the whole idea of the glass being half empty or half full. I think people who want to fight louder and harder, that’s what they need to do. As we speak, there are moms sitting at home quietly making a quilt for their sons [who have died of AIDS]. If those moms don’t feel they can stand up and yell, there’s another mom who will. This is a country where everyone can still speak their mind. We need people like Larry Kramer who will stand up and yell, but we also need the people who want to be quieter about it. It’s just important to stay inside your own experience, not turning it off and keeping the connection alive. Of course we can do more. Our government can do more -- don’t even get me started on that! But we need to focus on what is being done.

RPF: So, what do you think is being done?

JL: There is a hotbed of homophobia underneath the surface in our country, and that’s not just going to go away. But we need to chip away at it. The people who are contracting the disease are women and children and teenagers, not only IV drug users. AIDS is out there, everywhere, and there are still people who let their prejudices rule them and it colors their entire world. That’s why Hollywood Supports was created. There are a lot of people who were having trouble finding work because they have AIDS. Hollywood Supports helps them get work. It is all part of our responsibility as people, as human beings, to make the world a safer place, a more compassionate place. If everyone could look at the world and rise to a new level, things would be turning around.

RPF: But doesn’t the challenge remain getting people to help?

JL: If you’re asking that question, you’re connected. Anything you can do, if it’s an hour a week, an hour a month, a dollar a month. If you want to do something, you’ll find it, as long as you feel connected. I would say that you do not necessarily have to be a friend of a PWA to feel connected. In the case of Ryan White, they asked him if he was in the other position and was  a person without HIV meeting a PWA for the first time, would he have been just as afraid as everyone else? He said he would have been afraid, but he wouldn’t have been so cruel. I’m not a person who wants to hate. It’s not about hate, it’s about compassion and information. There are things I can do to help people.

RPF: Can you ever see a day without AIDS?

JL: Oh, God, please... Yes, I hold on to that vision. It’s so funny, it makes me think of Anne Frank and her belief that people are good at heart in spite of everything. We’re moving to a new level, a new time. We’re moving into a new century. I don’t want my friends to have died in vain. My friend [the author] Paul Monette has been transformed by this illness. He has what I call tsoris. Boy, this is not easy. [Light starts crying softly] I long for that day without AIDS. I don’t ever want to say it will never happen.

RPF: Some people feel uncomfortable discussing or focusing on the positive aspects of living with HIV. How would you answer these people?

JL: We all have to look at the reality of this hideous disease. We all know how incredibly difficult it is. At the hospital at the [Los Angeles] Shanti, we know that pain and reality and sorrow. We have to face that reality and see what’s being done. There are people -- gay men, in particular -- whose families are not talking to them because of this disease because of their ignorance of this disease. We need to see the reality of AIDS, not just the darkness, but also what people are doing. I prefer to focus on the positive. It doesn’t mean that I don’t see the reality. It’s our friends fighting this war. Look at ’em go! They’re showing us how the world can look, they’re models of how the world can change itself. You can either use something to lift you up or pull you down. The gay community has chosen to be lifted up by this challenge. The gay community has stepped up to the plate. The gay and lesbian community has been a model of what we can do, a model for how we can deal with the world. If it weren’t for the gay and lesbian community coming together so fast and so effectively putting together a political movement, who knows where we would be today?

RPF: The credit for what good has happened in the fight against AIDS has fallen squarely on the gay and lesbian community -- is that a fair assessment of what has happened?

JL: Absolutely! The gay and lesbian community stepped the fight against AIDS up to another level and made people realize that they had to look at AIDS, that AIDS just wssn’t going to go away simply by ignoring it. People want to turn the other way, they don’t want to have to think about AIDS and they don’t want to have to face reality. The gay community is an example of people changing drastically because they had to as a matter of survival. They’ve unquestionably proved that it could be done. I think the gay and lesbian community took AIDS and said we will turn this around and they started showing that to the world. They are a constant inspiration to me.

RPF: What about the heterosexual community? A recently published sex survey concluded that AIDS was not a real threat to heterosexuals in this country.

JL: Don’t tell that to Mary Fisher! This sex survey clearly sets us back in the fight against AIDS. We all have correctly said that AIDS affects women and children. If they don’t want to hear it and they just want to stay in denial, then it’s back to the glass half empty or half full. If you can touch one person, it will make a difference. Remember, it takes one candle to light a darkened room. We’ve got to rise to a new level or we’ll all stay in the Dark Ages.

JL: It reminds me of Helen Keller and the way Annie Sullivan tried to put a name on water. Helen knew it was water, but Annie continued to spell out w-a-t-e-r until she knew what it meant. It had a name, but it wasn’t until the feelings and passions were there that Helen Keller could see that it had a name. We are like Annie Sullivan. It requires energy and focus and patience and asking our friends for support and getting people to see the reality of AIDS, to show them that AIDS has a name and with that name comes a face. People like Mary Fisher are showing us that AIDS does indeed have a face. You know, the fight against ignorance is a fight we take on every single day. So, let’s fight on.