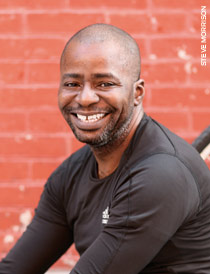 In 2002, Ken Harvin was living in Summerton, South Carolina, helping develop statewide public charter schools. He learned he was positive via a mobile HIV testing van at a local park. “I kept my status to myself,” recalls the ex-Marine. To maintain the secrecy, he traveled 54 miles each way to get treatment where folks wouldn’t recognize him. He took his meds as directed but attained little knowledge of the virus and his health.

That cycle of stigma and ignorance ended when he moved to the Bronx, New York, and sought care at Housing Works in 2009, eventually enrolling in its job-training program. “That paved the way for me to get full-time employment as a care manager and to give back to the very place and community that brought me into the program,” he says of Housing Works, which fights the dual epidemics of AIDS and homelessness.

To help raise awareness of both crises among the African-American community, Harvin participated this fall in Braking the Cycle, a Housing Works’ fundraising bike ride from Boston to New York.

What three adjectives best describe you?
Energetic, optimistic and conscientious.

What is your greatest regret?
Not completing my undergraduate studies in Georgia. However, today I am working on a CUNY [City University of New York] bachelor’s degree with a focus on community health and urban studies.

What keeps you up at night?
The undesirable conditions that many of [Housing Works’] clients are subjected to as a result of where they live. Conditions that are not healthy for people with challenged immune systems and other health concerns.

If you could change one thing about living with HIV, what would it be?
The mind-set that it’s a death sentence.

What person in the HIV/AIDS community do you most admire?
Magic Johnson of the LA Lakers and his commitment to invest in marginalized communities like Harlem, [New York,] and Eastover, South Carolina.

If you had to evacuate your house immediately, what is the one thing you would grab on the way out?
My 8-year-old cocker spaniel Tinkerbell and a pair of my Cole Haan shoes.

Cosmetic Surgeon Must Pay $375K in Damages for HIV Discrimination