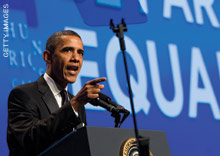 Finally, something we want to spread around the world: tolerance. In December, the Obama administration announced that the United States would use all its tools of diplomacy, including foreign aid, to promote civil rights for lesbian, gay, bisexual and transgender (LGBT) people around the world. In November, the Human Dignity Trust, a new British legal rights group, kicked off a global campaign to decriminalize homosexuality in more than 80 countries where consensual same-sex sexual relations between adults have been outlawed.

In October, AIDS-Free World, an international advocacy group, presented a first-ever legal challenge to antigay laws in Jamaica by filing a petition at the Inter-American Commission on Human Rights. Also in October, decriminalizing homosexuality was on the agenda at a meeting of government leaders from the Commonwealth of Nations, an association of countries formerly of the British empire. (Jamaica and 40 other countries of the Commonwealth have antigay laws.)

Advancing LGBT civil rights globally is not only good for LGBT people—it’s also good for people with HIV/AIDS. In countries with antigay laws, LGBT people are less likely to get tested for HIV or seek care and treatment because they fear being identified as LGBT. As a result, antigay laws significantly keep HIV rates disproportionately high for gay men and other men who have sex with men. Fighting homophobia also fights HIV/AIDS stigma. Let’s hope that discrimination is another epidemic we can vanquish.