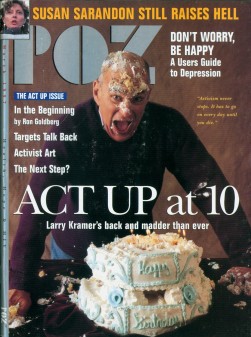 He’s baaack, madder than ever and taking aim

A few months ago in People I read an article about a Republican mother from North Carolina whose son died of AIDS. She wrote a letter to Senator Jesse Helms, whom she’d always supported, asking him to reconsider his stand on gay and AIDS issues. He wrote back with a hateful letter saying the kid got what he deserved. The mother became so angry she started a statewide organization of 1,000 mothers dedicated to defeating Helms’ re-election.

I got angry just reading about it. Then I thought about all those other organizations of mothers and parents, such as Mothers’ Voices and PFLAG (Parents, Families and Friends of Lesbians and Gays). I asked myself: Why don’t I ever hear their anger? Where the hell have they been? Are they pressuring the system? All they seem to do is give the same goody-goody awards at annual dinners to “honor” a bunch of faceless, goody-goody people.

I realized how angry I was getting. Just like the old days. Then I started thinking: Why does everyone say no one can get angry about AIDS anymore?

You who are reading this, are you angry? Or are you too burned out or have some other excuse? Or are you just too lazy to be angry anymore? Maybe you’re saying, “Oh, this is Larry Kramer ranting and raving,” effectively dismissing my anger?

I’m going to list a few things that make me angry. Maybe they’ll make you angry; they’ll probably make you angry at me. That’s fine. But I hope they also make you angry enough to look at yourselves and how dangerously complacent our community has become -- at how complacency will kill us.

Lobucavir is a new drug, as yet unapproved, that appears to be effective against HIV, HBV, CMV, herpes and KS. ACT UP came across this in 1987, but a decade later Bristol-Myers Squibb, which owns the drug, still hasn’t conducted necessary trials or filed for FDA approval. Why hasn’t ACT UP stormed Bristol? Why doesn’t TAG [Treatment Action Group] put pressure on Bristol via their personal court jester, Dr. William Paul of the goody-goody Office of AIDS Research?

What has this Office of AIDS Research done in its four years of existence except promote a major incompetent, Dr. Paul, into a position where he can sit on his ass and watch us die. Sound familiar? Are you waking up?

Why doesn’t anyone besides me realize that TAG delayed AIDS research by four years when they set up this Office of AIDS Research and championed Paul in the first place? Isn’t anyone else angry about this?

What’s wrong with Dr. Marty Markowitz of the Aaron Diamond Research Center? Why is he going around the bend screaming that people are morons if they aren’t taking protease inhibitors immediately?

Why is one of my favorite doctors, the brilliant Dr. David Ho, also of Aaron Diamond, pimping for TAG and mailing out fundraising letters filled with inaccuracies and outright lies about what that organization of conservative right-wing former ACT UPers has accomplished? Have they lost their minds? Markowitz and Ho are doctors! Scientists! Have they no dignity?

What about all those ass-kissing gay “leaders” working for Clinton? What has that wretched president done in the past four years that has actually taken us closer to a cure? Why do they think he will be any better in his second term?

Why do people like Richard Socarides (Clinton’s gay-community liaison) and Fred Hochberg (a rich, gay fundraiser for Clinton) think being close to power accomplishes anything? All it accomplishes is to corrupt Richard Socarides and Fred Hochberg. Have they ever been angry about AIDS? Has activism taught them nothing? Just look how useless Bob Hattoy and David Mixner have been for the past four years. And they’re the Clintons’ old-time buddies! For the first time in my adult life I didn’t vote. I could not morally bring myself to vote for either of those rancid turkeys.

As our representatives, the access-obsessed Human Rights Campaign (HRC) and the nearly irrelevant National Gay and Lesbian Task Force (NGLTF), should have demanded much more for the gay community’s support of Clinton. Both groups are led by invisible people who, I guarantee you, are certainly not angry. They are so docile they continue to sell us out, time after time.

They -- NGLTF and HRC -- have abandoned AIDS, trying to wish it away, just as straight society abandoned gay people. It disgusts me. The gay establishment used AIDS to raise funds, build their organizations, pay themselves big salaries and get invited to fancy cocktail parties. Now they run from AIDS like it was yesterday’s dog shit, leaving those of us with the virus to fend for ourselves. That ought to make you furious.

The national AIDS organizations aren’t much better. Mired in internal politics and too-timid tactics, their leaders dance like marionettes when the slightest petal of recognition falls their way. None demonstrate anger, outrage or urgency. Shame on their boards for perpetuating such mediocrity.

Why is the younger gay generation so apathetic and weak? So unangry. They’re so passive. So uninvolved. So well-dressed. What happened to a whole generation that all they can do is read that trendy piece of puerile pabulum, Out, go to discos and ignore the battles that must be fought? I am ashamed of them and their material-chasing, postactivism mentality.

See how angry I still can get?

Why can’t you? Is it because you think the protease inhibitors are going to save us? Think again. And maybe it’ll make you angry.

Protease inhibitors may give us a few more years, but they may not. Read the October 1996 Treatment Issues about increasing treatment failure. Read Mike Barr’s article on eliminating the virus in the (See February 1997 POZ). More and more people are coming to the end of protease treatments’ usefulness. Until new drugs come along, there’s nothing for these people to take.

There are more promising drugs in the pipeline, but it is still taking too long for us to get them. Hundreds of thousands of us will die in the meantime.

Why? Because no one is pressuring the drug companies anymore. Because TAG and David Ho and Marty Markowitz and Jerome Groopman and Andrew Sullivan and The New York Times Magazine and The Wall Street Journal have pacified everyone beyond belief. Because the hideous National Institutes of Health (NIH) can’t and won’t test anything anymore. And because their monster director, Harold Varmus, doesn’t believe in research for cures, only in basic science. So cures are down the toilet at the NIH.

That means you, me and everyone else who has this virus are also down the toilet, as far as the NIH is concerned. As far as I’m concerned, Harold Varmus can shove a stick of dynamite up his butt and blow himself back to California, which I wish he’d never left. Angry? You bet I am. Varmus is supposed to be saving our lives and he couldn’t give a damn. His actions prove it.

Another thing. What’s happened to some of our wonderful fighting writers?

Gabriel Rotello, one of my favorite editors, who taught me how to go for the jugular even more: Who of importance reads you in that invisible Newsday? (And Laurie Garrett, the best AIDS reporter in the world, writes for it too.)

Michelangelo Signorile, you, my hero, my great role model, you who invented modern outing, why are you writing such pallid safe stuff in that stupid useless Out?

Sarah Pettit, how can you, one smart lady, edit Out, which is not smart and bears no relevance to the life of any intelligent gay person?

And The Advocate? Yuck and double-yuck.

This is the best the gay community can produce -- these two inconsequential magazines? And POZ -- even if it prints this -- could stand to look at itself. AIDS isn’t just about wonderful, interesting lives. It’s about people we love dying horrible deaths. It’s about poverty, greed, loneliness and racism. When was the last time POZ did an investigative story on drug-company greed? Or an exposé on AIDS outside of America, where they haven’t even had AZT?

If reading this makes you angry at me, let me refresh your memory about the friends and lovers you’ve lost. People you cared about, loved, built lives with. People you cried with, laughed with, made love with. People who are dead today because everyone else wasn’t angry enough to save them. Remember all those people? Or have you forgotten them just like you forgot your anger? If you don’t like any of what I’ve said, tough shit. Just don’t whine about it when your friends, your lovers, people you care about die from this fucking plague.

Right now, we’ve got a bunch of dumb-ass AIDS service organizations more concerned with their mortgages than our mortality. More concerned with getting new donors than with getting new drugs. More intent on getting you to the next Carnegie Hall benefit for Angela-Elizabeth-Liza-Buckley-Taylor than on squeezing Bill Clinton’s nuts until they exude a cure and a vaccine. These organizations have sacrificed urgency, action and anger in a pathetic exchange for careerism, corner offices, fancy cocktail parties and their names in Liz Smith’s column.

Everything has become too fucking polite. You show me the last important thing we got by being polite, and I’ll show you a mirage.

Listen, if an old man of 61 can get up this much anger after all these years, you sure as hell ought to be able to as well. Activists: I can’t see you. I can’t hear you.

Because right now we’re still going down the tubes. Too many of us are still dying. And too many of us are pretending we’re all going to live through this until a ripe old age. And the people who could be helping us aren’t. And rich cats like David Geffen who could single-handedly afford to save us all can only sniff the shit of hideous closet cases like Calvin Klein. David, when are you going to wake up and smell the fact that Calvin Klein is not a nice person and a total waste of your time!

David, you know better. David, you have not given one dollar to any cause that has been anything but safe and perpetuates the status quo. You have not given one dollar to anything or anyone or any cause that is really changing things. How dare you kiss Clinton’s ass? Does being so near the rectum of power really turn you on that much? Are you angry, David? I can’t tell.

So far as I know, you are our only multibillionaire. That gives you a multibillion responsibilities. You did not get all this money from your brains. You got it from having great gay taste and being a good gambler. Why don’t you really gamble and fund the organization you always wanted. Buy a building in Washington. Send forth hundreds, thousands, to lobby Congress and twist arms and threaten our enemies, just like they threaten us. Fight back, David, instead of being one of them.

Maxine Wolfe, the great lesbian activist, gave me one of the smartest, most difficult pieces of advice I’ve ever had: Activism never stops. It has to go on every single day until you die. Why do people think they can drop in and drop out?

You can’t. Or you die. You cannot stop for one single minute. Or you’ll die.