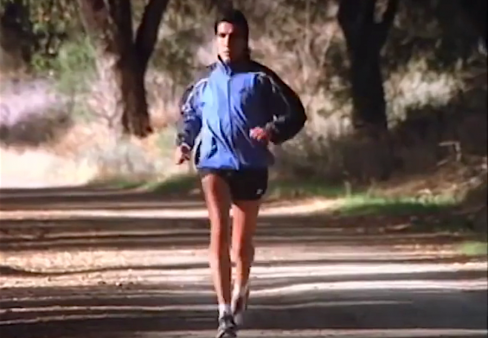 HIV positive for more than a decade, Nike poster boy Ric Muñoz has yet to slow down

The irony is not lost on him. He may run long distances just like the Nike commercial said: “Ric Muñoz/80 miles every week/10 marathons every year/HIV positive/Just do it.” Yet he takes a shuttle to and from work -- a mere two miles away -- so he can spend time reading, which is, believe it or not, his greatest passion. In fact, his life in West Hollywood couldn’t be simpler: He works as a secretary at an insurance company and spends his spare time reading 19th Century English lit, listening to music and watching pro football; he has no pets and no plants. And still, this 38-year-old homebody -- who estimates he’s been HIV positive for at least 12 years -- has made advertising history and gone the distance to bring a message of hope.

I’ve heard that others have said, “He may be able to do all that running, but he’s probably got a thousand T-cells.” Actually, my count has fallen over the years from 551 to 178 currently, but I haven’t gotten sick and I haven’t changed my pace. As healthy as I’ve felt, I’ve decided that the time to make a change is the day I feel an unmistakeable physical decline.

Part of why I told my friends I tested positive was so it wouldn’t be a shock to them if I ended up in the hospital. Almost immediately they said, “Well, shouldn’t you cut back on your running, since it puts your body through so much physical turmoil?” It makes perfect sense that people would say that, but I never thought they might be right. My running is what’s always kept me going. And here it is, nine years later, and I don’t feel any different. If I had listened to them, where would I be? I only wish I had the power to relay that to other people who spend all those hours fretting and projecting and worrying. If only they were devoting all that energy to doing the things they love -- be it running or opera or pet shows -- their stress would be far less.

I prefer to do life my own way. When you suspend the thing you love, you open the door to focusing on friends who went pretty fast and thinking, “Maybe that’ll happen to me, too.” The most accomplished HIV physicians on Earth can’t tell me that cutting back will prolong my life. And I won’t, unless someone can guarantee that I’ll end up in the hospital if I continue. But if they say, “If I were you...,” I’ll say right back, “Well, you’re not.” If I suffer for it, then it’s my decision.

I haven’t felt yet like I’m doing too much running and neither of my doctors has told me to cut back or stop. They see very clearly the immense psychological benefit of my whole approach. One of them told me, “Don’t mislead yourself into automatically assuming that fatigue or other problems are due to your running.” But they’re also worried I might develop some sort of denial, so I’ve made a deal with them that I will re-evaluate my running if I feel like something is wrong.

It’s been nine years of waiting for that moment, and I haven’t had any opportunistic infections. One of my explanations is that I’ve never had an alcoholic beverage, a recreational drug or a cigarette. When you use these things, you introduce toxins that break down your immune system, even if it’s ever so slightly. I believe this awareness has had a big impact on my choice to stay away from the stuff.

I eat a basic runner’s diet: Lots of carbohydrates and lots of water (from 70 to 90 ounces a day). It can be tedious, but I’m flushing those toxins out of my system. And as a runner, my leg muscles have to stay as hydrated as possible. I’m also a vegetarian. I eat cheese but no eggs and I don’t take any protein drinks because I think the American obsession with protein has been overstated. A long time ago, America bought the false line that you have to have lots of protein to be strong; certainly that’s due to the beef industry’s ads.

As to my treatments, I take three herbs which act as natural antibiotics: An echinacea/goldenseal combination three days a week, followed by astragalus for three days. I also take Bactrim three days a week as prophylaxis against Pneumocystis carinii pneumonia (PCP). I stopped taking AZT in 1991 because my CPK enzyme was too high, which could have led to muscle atrophy. Then I went on ddI for two and a half years, but stopped taking it after discovering that it had the potential to cause cancer (a fact which my doctor never shared with me).

My personal happiness, though, is key. There’s only so much a person can do physically. You can take your medicines, eat right and get your eight to 10 hours of sleep. But your number one priority is your emotional health. If it means going to your family or your support group for help, then that’s the most critical thing. You have to accept that HIV is a part of your life and develop the best possible outlook. Because the best shot for the virus is when you collapse and throw in the towel right at the top of the game.

So I do what feels right for me. I run just because I love it! Running helps me review the issues of my life and sort out the problems I may be having or things I have to take care of. It’s so uninterrupted. But I don’t do any kind of meditation while running; I just let thoughts percolate through.

If something like HIV rolls around, it’s so important to keep the active aspect of your life in full throttle. To compromise on that would deprive you of the golden opportunity you’ve been given to keep showing yourself how alive you are. If you don’t have an exercise program, try to start something, anything. If you have one, keep at it. I know I’m an extreme example, but at the same time, I represent thousands of HIV positive people who keep up their vigorous physical activities. If all these people were comfortable talking about their HIV status, they would probably startle their friends and loved ones who would exclaim, “You do all of that and you’re HIV positive?”

As far as I’m concerned, one Magic Johnson comeback is worth 10 Nike commercials for motivating people with HIV. It’s an inspiration to see a world-famous athlete continuing to do what only a tiny percentage of the world’s population can do. So whether it means looking to Magic or me or the guy down the street who’s HIV positive and active, find your impetus. Our bodies may all be quite different, but you can still bring some of these very real benefits into your life.