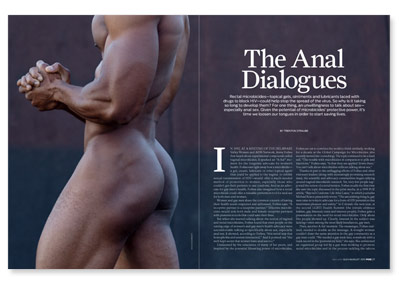 In 1992, at a meeting of the Delaware Valley Women and AIDS Network, Anna Forbes first heard about experimental compounds called vaginal microbicides. It sparked an “A-ha!” moment for the longtime advocate for women’s health. Forbes saw right away how a microbicide—a gel, cream, lubricant or other topical agent that could be applied to the vagina  to inhibit sexual transmission of HIV—would offer a much-needed method of protection to women, especially those who couldn’t get their partners to use condoms. And as an advocate for gay men’s health, Forbes also imagined how a rectal microbicide could offer a valuable prevention tool for anal sex for both men and women.

Women and gay men share the common concern of having their health needs respected and addressed, Forbes says. “A receptive partner is a receptive partner.” Effective microbicides would arm both male and female receptive partners with prevention tools that could save their lives.

Undaunted by the reluctance of many of her peers, and inspired by the potential lifesaving power of microbicides, Forbes set out to convince the world to think similarly, working for a decade at the Global Campaign for Microbicides (she recently moved into consulting). The topic continued to be a hard sell. “The trouble with microbicides in comparison to pills and injections,” Forbes says, “is that they are applied ‘down there.’ You can’t talk about microbicides without talking about sex.”

Thanks in part to the unflagging efforts of Forbes and other visionary leaders (along with increasingly promising research data), the scientific and advocacy communities began rallying around vaginal microbicide research. Yet, very few people supported the notion of a rectal version. Forbes recalls the first time she saw the topic discussed in the print media, in a 1999 POZ article, “Beyond Condoms: Life After Latex,” in which journalist Michael Scarce presciently wrote: “The astonishing thing is, gay men raise no voice to advocate for a form of HIV prevention that maximizes pleasure and safety.” In Colorado the next year, at the second LGBTI Health Summit (the initials embrace lesbian, gay, bisexual, trans and intersex people), Forbes gave a presentation on the need for rectal microbicides. Only about five people showed up. Clearly, interest in the subject was lacking—even among the most likely benefactors, gay men.

Then, another A-ha! moment: The messenger, Forbes realized, needed to double as the message. A straight woman couldn’t draw the same attention in the gay community as a gay man could. “We needed a gay male face, somebody with a track record in the [prevention] field,” she says. She envisioned an organized group led by a gay man working to promote rectal microbicides and in the process tackling the taboos associated with anal sex. In 2005, Forbes approached some likely advocates: Marc-André LeBlanc from the Canadian AIDS Society, Julie Davids from CHAMP (Community HIV/AIDS Mobilization Project) and Jim Pickett of the AIDS Foundation of Chicago. Although all were overextended, they agreed on the need to fight for a new form of prevention. Thus, the International Rectal Microbicide Advocates (IRMA) group was formed.

IRMA began modestly. “We had a listserv, and our goal was to get people to share information [about rectal microbicides],” says Pickett, IRMA’s chair (its out, gay face). He recalls begging people at the 2005 National HIV Prevention Conference to join the email group. Many resisted, arguing that rectal microbicides were too futuristic and that advocating for them would deflect resources from the priority concern at the moment: condoms. “People would almost groan when Jim would get on stage,” says Ian McGowan, MD, a leading microbicide researcher.

People’s reluctance to talk about butts (male and female), similarly muzzled scientists. As recently as a few years ago, many researchers scoffed at the very idea of a rectal microbicide, claiming human anatomy made it impossible. Unlike the vagina, which is essentially an enclosed container, the five-foot-long colon, Pickett says, is “like the Holland Tunnel.” There was the question of how far ejaculate could travel up the colon. Would the colon’s entire surface have to be protected? How much gel would be required—and how much could a body take? Scientists didn’t know. That is, until Craig Hendrix, MD, at Johns Hopkins University, conducted experiments involving some brave volunteers, faux microbicides and a hollow dildo that squirted an “ejaculate” traceable by MRI scans. (Read one volunteer’s hilarious account, “Putting My Ass on the Line,” on the IRMA blog at irma-rectalmicrobicides.blogspot.com.) The experiments proved that the faux microbicide traveled well with the ejaculate and that to be effective, a microbicide would likely need to coat only the lowest 4 to 6 inches of the rectum and anal canal. Furthermore, researchers determined that humans could tolerate up to 30 milliliters (ml) of gel administered anally. However, the gel currently being studied requires only 4 ml, less than a teaspoon.

Perhaps IRMA’s most visible work is three game-changing reports it published in conjunction with the biennial International Microbicides Conference. The first, Rectal Microbicides: Investments & Advocacy in 2006, compiled what research was being done and where—a tricky task. “A lot of researchers were concerned that if ‘anal’ or ‘rectal’ appeared in research proposals or reports, they wouldn’t get funded, so they’d scrub their papers so those words wouldn’t show up,” LeBlanc says. “Instead, they would refer to ‘topical use of products’ or other language.” And because of the dangers surrounding the subject—male-to-male sex is illegal in many countries, including 31 in sub-Saharan Africa—IRMA first had to gain researchers’ trust, proving they were not raging advocates who would alienate and antagonize. Their professionalism paid off, and the report was a hit. “It showed we were serious,” Pickett says, “and we got hundreds of new members.”

Along the way, microbicide research has produced some immediate benefits. At a 2006 Cape Town AIDS conference, biomedical scientists with the Population Council presented data on the possible link between anal lubes and HIV risk. (The same team, lead by David Phillips, PhD, reported in 2000 that the spermicide nonoxynol-9 damaged linings of the rectum and vagina, thus increasing the risk for HIV and herpes—findings that resulted in N-9 being removed from most condoms.) The lube presentation, Pickett says, sparked his own revelatory moment. “We were like, The lubes we have are not tested for safety? We have to get research on this. Yes, we want rectal microbicides, but people are using lubes today!”

The survey results have been pivotal to researchers such as Charlene Dezzutti, PhD, a lab director at the Microbicide Trials Network, who is examining the lube qualities that might affect HIV risk and be of use in microbicides.

IRMA’s hard work is paying off elsewhere too. The energetic listserv now includes more than 1,000 members. Pickett manages its daily conversation from his office at the AIDS Foundation of Chicago (AFC), where he is director of advocacy (IRMA is a project of AFC). “I think the overarching thing that has made us successful is that we bring together scientists and advocates,” Pickett says. “There is no other forum like this. An advocate in Thailand can post an opinion, and a researcher in Peru or London or Pittsburgh can comment all in the same hour—people find it really useful.”

“[IRMA is] doing all the right stuff,” says Forbes, speaking like a proud momma. “They’re recognizing the importance of geographic and constituency diversities, and they’re promoting everybody having the discussion in whatever way makes sense in their own communities and encouraging people to share ownership—exactly what we need.”

This year, IRMA had good news to trumpet. A Microbicide Trials Network study, MTN-006, found that people who used a rectal gel containing 1 percent tenofovir, an HIV drug, had high concentrations of the med in rectal tissue and lower concentrations in the blood stream, which could mean fewer side effects. The downside: A single dose before sex probably won’t be effective.

Today, people no longer groan when Pickett takes the stage. “People came up to me after the CAPRISA results [a large South African microbicide study] and said, ‘For all these years, I thought you were crazy, but you’ve proven me wrong. Now I understand why you had such a belief in this.’”

In the meantime, here’s a highlight of what scientists are investigating and how lube qualities might affect the success of microbicides:

Charlene Dezzutti, PhD, with the Microbicide Trials Network and the University of Pittsburgh, looked at these qualities in six popular lubes. Some findings: Pré and Wet Platinum appear safest. Pré is the only water-based lube that is iso-osmolar and doesn’t damage the epithelium. KY Jelly wiped out entire colonies of good bacteria. Astroglide is the most hyperosmolar and most toxic to cells and tissue (Elbow Grease, ID Glide and KY Jelly have similar toxicity profiles). But Dezzutti also warns that more studies are needed before any official warning or suggestions can be issued.

Starting to Gel
Microbicides: Where they are now and where they are going
VAGINAL GEL: After two decades of disappointing results, a breakthrough arrived last summer with results of the CAPRISA 004 trial: Women using a gel containing 1 percent tenofovir (an HIV med found in Atripla, Viread and Truvada) had 39 percent fewer infections than those using a placebo. Women with 80 percent adherence to the two necessary applications per sex act (12 hours before, then immediately after) had even fewer infections. The gel also offered protection against herpes.
What’s Next: Studies are under-way to confirm CAPRISA 004 results and determine the most effective concentrations and doses, but the global economic crisis has depleted funding, slowing progress. On the bright side, the drug from the vaginal gel is showing up in rectal tissue, so one product might offer women protection in both areas.
RECTAL GEL: Microbicide Trials Network study MTN-006 looked at using the vaginal tenofovir gel rectally, with promising results announced in February. Although the vaginal formulation harmed the rectal lining and caused gastrointestinal distress, Charlene Dezzutti’s team developed a better version with less glycerin. And, says Ian McGowan, PhD, a co-principal study investigator, “We found that when you give the drug topically, you get very high concentrations in the rectal tissue—a hundred times the amount from a single Viread tablet.” A few caveats: Tenofovir works not by directly attacking and disarming HIV, but by accumulating in the tissue and CD4 cells HIV will attack, preventing HIV from replicating once it invades the cell. Unfortunately, this accumulation demands repeated doses. “I think MTN-006 suggests,” McGowan says, “that if you just take one dose, orally or rectally, half an hour before exposure, I would doubt you’d be protected.”
What’s Next: A Phase I study (MTN-007) on the safety and acceptability of the rectal tenofovir gel; and Project Gel, investigating the use of rectal microbicides among African-American and Latino men who have sex with men (MSM). “It’s critical,” McGowan says, “because these are the people who are getting infected and need the product.”
FUTURE IDEAS AND EXPERIMENTS:
Other HIV meds or combos—or completely new compounds—may offer better protection than tenofovir as microbicides (hint: HIV drugs that are too toxic as pills may work as topical solutions).

Different modes of delivery: How about a slowly dissolving ring instead of a vaginal gel? Or combining a microbicide with a vaccine, to help prepare the immune system for an encounter with HIV? And vaginal probiotics—living microbicides—could be created by genetically altering bacterial cultures such as the common lactobacilli.

Research is showing that HIV might lower the electrical barrier of epithelial cells, enabling infection even without surface damage. Such new knowledge could produce future strategies and modes of protection.