Chicken Soup for the Soul 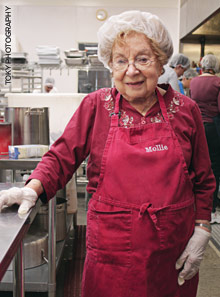 Nathaniel Pier was a private physician who treated people living with AIDS in New York City during the epidemic’s initial outbreak in the early 1980s. He died from the virus in 1989 when he was 37 years old. Instead of succumbing to depression after her loss, his mother, Mollie Pier, decided to honor the memory of her son by cofounding Project Chicken Soup (PCS), a nonprofit organization in California.

As Nathaniel used his medical knowledge to help those affected by HIV/AIDS, Mollie uses her expertise in the kitchen to do the same. Project Chicken Soup prepares and delivers free, nutritious, kosher meals to people in the greater Los Angeles area who are living with HIV/AIDS, cancer and other serious illnesses—many of the recipes are Mollie’s own. At 91 years old, she’s still in the kitchen stirring the soup pot as PCS’s resident Jewish Grandmother. The sage nonagenarian shares her words of wisdom with POZ.

What three adjectives best describe you?
Kind, caring and concerned.

What is your greatest achievement?
Conquering sadness and adversity by turning such events into positive action. Making lemonade out of lemons!
What keeps you up at night?
Thinking of how I’d like to change the world to be one of peace.
What is the best advice you’ve ever received?
Maintain your good health and continue to work in order to repair the world.

What person in the HIV world do you most admire?
I cannot single out just one. I know and love too many people who have worked to make this a better world no matter how they’ve contributed.
What drives you to do what you do?
The joy I generate from doing all I can and the very positive feedback I receive from the LGBT community.
What is your motto?
Give all you can because it will come back to you in overwhelming amounts.
If you could be any animal, what would you be? And why?
Anything that would be loved and cared for—probably a pampered, cute dog.