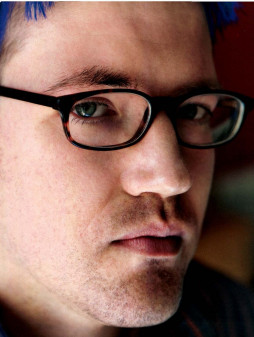 He’s positive, she’s negative—and together, husband-and-wife HIV educators Shawn Decker and Gwenn Barringer use intimate details of their marital life to lead others toward safety.

Decker, who graces POZ’s September 2006 cover with his dyed blue hair and dark-rimmed glasses, has been living with HIV and hemophilia for 20 years. And he’s been writing about it for a decade, in an irreverent, sometimes outrageous, blog called mypetvirus.com. The blog (now also on POZ.com) has won Decker a fierce following, and he’ll likely win more with his hilarious new memoir, My Pet Virus, out September 21. The book, exclusively excerpted in the POZ, traces his life with HIV from junior high to his fateful meeting with POZ founder Sean Strub.

Decker shares the magazine cover with the woman he calls his “wife partner,” HIV negative Gwenn Barringer. They serve as health educators, traveling to colleges across the country, discussing their lives (and sex lives) as a sero-discordant couple. Their goal:  to inspire young people to educate themselves about—and  protect themselves from—HIV. But they spent last night “de-AIDSing,” as Barringer likes to call it: Playing Rummikub on the bed of their Charlottesville, Virginia, townhouse and browsing the magazine rack at a 24-hour bookstore until the wee hours. Their public life will resume soon enough, with the new school year and Shawn’s book tour. But for now, they belong to POZ.

Q: Shawn, you’ve been blogging about your HIV status and writing for POZ for years. What keeps you going?
Shawn: A big part of disclosing and speaking out was discovering my love for writing. The moment I thought about going public with my HIV status, I couldn’t get that website up fast enough, and when my doctor gave me POZ, I couldn’t write that letter and stamp it fast enough to send to Sean Strub. I still remember the thrill, and I’m proud that I have this document of experiences and am sharing them in the magazine. I feel like while I’m young I need to reach that demographic. I guess I’ll soon become some old fogy writer.

Gwenn: You’re not that old, jeez.

Q: Gwenn, before you started dating Shawn you worked at an AIDS service organization (ASO). How did it feel to have your work become your life?
G: I was in graduate school when I met Shawn, conducting basic education programs for the community and doing research that focused on condom use, particularly among college females. I was also working with people who were positive at the ASO. I knew people who were in sero-diverse relationships. There were gay relationships, but still. So I was in a different position than, say, most other people who were going to meet someone who’s positive and fall in love with them. I had my concerns, but a lot of them were the same as you’d find in a “normal” relationship. I was just really excited in terms of the sex. I always say, if I can stay negative in this relationship, anybody should be able to.

Q: You two met while waiting in line to meet Jeanne White, Ryan White’s mother, at one of her speaking engagements. Shawn, you were already actively journaling your life online, and Gwenn had come across your story through her case management work. How else has HIV brought you closer together?
S: I was considering getting married the month I was diagnosed with AIDS. Gwenn and I had been dating for three or four months at the time of my diagnosis. I was really sick, and she could have cut and run, but she just kind of dug her heels in. I never got the sense that it was a choice for her; it was a natural reaction to want to help me because we were already a team. So the commitment was there five years before we got technically married.
Q: Shawn, when you realized Gwenn was in it for the very long haul, did that positively affect your ability to accept long-term goals, like marriage and the notion of writing your book, My Pet Virus?
S: The funniest thing is that in the summer of ’98, I was visiting a friend, and I was telling him I was going to start writing books about my life. And a month after I got home, I met Gwenn. I was about to live so much of what’s in the book. I want the reality of what it’s been like for me to be something that people can read and grasp.

G: Ironically, being the one who’s more private in the relationship, I pushed him pretty hard to write more in depth because a lot of people with hemophilia and HIV are not around anymore. It kind of wiped out that community. It was important to have that story told, to have that story of someone who is still around with both those conditions.

Q: You’d been working on your book for four years. What’s it like to finally have it done?
It’s critical that our experience be put in print. In the last ten years, we’ve had a program where we speak about our relationship; it’s important for me to tell the whole story. In those presentations, I just don’t talk about my childhood very often because it’s not relevant to students who need information on safer sex. And yet I think a lot of what happened in my childhood in Waynesboro is [important for people to hear] because it dictated a lot of the decisions I made later in life. Writing it out like that sort of connected a lot of the dots for me. There’s a difference between what we do while speaking—going somewhere, being in a room with 100 people talking about it and leaving that room and flying back home—and having people carry your life story around in their backpack or having it on their nightstand. Or maybe, God, even in the bathroom. But I’m excited that it’s going to be out there in this format.

Q: The stories you tell in your book and those you share as part of your educational program (“A Boy, A Girl, A Virus”) are pretty candid. What’s it like having your relationship be so public? Which parts of your life remain private?
S: So much of my identity was wrapped up in being “public guy with AIDS,” but I’ve kind of mellowed with that. It shifted a bit when Gwenn and I started dating because it involved another person and their emotions. Anybody who is involved in a job that they feel very passionately about can have that line blurred between their work and their personal life. It can be maddening. When I first started speaking out, I was a little misguided. I felt like “nobody knows more about HIV than those living with it.” Having HIV is a big part of what it’s going to take to educate others about the epidemic, but there are a lot of people who know a lot about it who don’t have it.

G: I have a much bigger issue with privacy than Shawn does. That can be difficult for me at times. Normally, the summers are time off from talking about myself and talking about HIV and answering all these questions. Recently, one of my things has been no more [media] in my house. It’s my place. I have to have a physical place that’s kind of a sanctuary. It’s important to have an identity outside of your life as an AIDS educator.
Q: Shawn, do you ever feel like people treat you differently since you did not contract HIV sexually?
S: People treated me differently before Gwenn and I went public, when I was this single dude in his twenties and was infected since childhood. I would get more sympathy hugs. But once Gwenn and I started speaking together, I wasn’t a kid that received contaminated blood products. I was the adult with HIV who was having protected sex with his girlfriend. But I feel like we placate the simple-minded people who can respond enough only to innocent victims in our society.

Q: Why is it important for young people to see educators like you two speak about your life as a couple?
S: I guess I give people an avenue to come to it if they’re uncomfortable with homosexuality and IV drug use or the other aspects that encapsulate the AIDS community. But I think people are definitely not comfortable with the idea of anybody with HIV having sex. We’ve had success in getting people to understand that “positoids,” a term I invented for positive people, have a sex life and they can have fun—even with condoms involved. If you’re talking about AIDS and you’re not talking about sex, then you’re not doing your job. I think people relate to personal stories, and I wanted to address what straight dudes with HIV go through.

G: Personal stories—and that’s basically what our program is about—are extremely important. I can see people kind of looking at us onstage and thinking, “Shawn is kind of cute.” The fact that we look exactly like they look puts an end to the “you can tell [someone has HIV] by looking at them” myth.