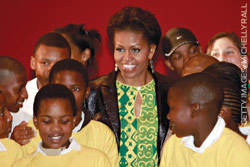 We love the POTUS and FLOTUS (President of the United States and First Lady of the United States) for getting tested for HIV publicly in Kenya during his presidential campaign. Now, we love Michelle Obama for mentioning HIV/AIDS in her June 22 speech in South Africa, saying: “You can be the generation that ends HIV/AIDS in our time—the generation that fights not just the disease, but the stigma of the disease.... HIV is preventable and treatable and should never be a source of shame.” Now, if we could only get her to mention that HIV/AIDS is the No. 1 cause of death of women ages 15 to 44 worldwide and that African-American women are 18 times more likely to get HIV than their white peers.

HIV Cure Strategies May Need to Be Tailored According to Sex