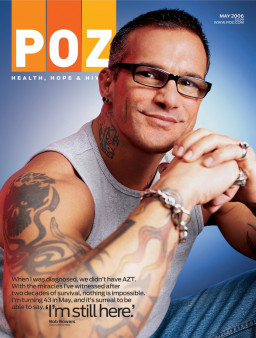 Bob Bowers, who appears on POZ’s May 2006 cover, tours the country speaking to students through his organization, HIVictorious (www.hivictorious.org). Or check out his more personal website at www.onetoughpirate.com.


How did you get involved with public speaking?

When I was diagnosed, I was living with my girlfriend, and we were both using IV drugs. I didn’t get a ton of support right away from my friends and family, so I went to the AIDS Project Los Angeles. I was one of their first clients. Someone there recommended that I go speak at a high school. It was weird standing on a stage and saying I have AIDS. But the students gave such a warm response to something that was supposedly so shameful. I realized sharing my story was empowering, so I kept doing it.

Did you date much after your diagnosis?

I broke up with my girlfriend, who had stayed negative, and for the first year or two, I felt dirty or shameful. But eventually, I realized I could kiss and have intimacy just like anyone else. But I was still this 21-year-old kid trying to explain HIV to negative women. I would be out on a date, and they would start talking about marriage and having a family, and my heart would just sink. My support group was all gay men, and while they were amazing, I couldn’t really talk about those issues, and I started to feel completely alone. Then around 1990, I found a support group for heterosexuals. But that group really taught me how to live with HIV. I remember saying to one guy, “You’re going to die, and you’re not even 30.” He said, “Bob, it’s quality, not quantity, of time.” He was right. I think I’ve lived a more full and incredible life than most people could ever hope for.


What has your experience been with all the changing treatments over the past 20 years?

After so many years of living with no hope, it was still bittersweet when AZT first came out. Prior to AZT, I had tried all kinds of alternative treatments. One day, I went to the gym and was told that my friend Tom, who had been taking AZT, had died of liver failure. That was the first time I realized how toxic these lifesaving medications can be. I’ve experienced side effects, from nausea to neuropathy to severe depression. For a while I couldn’t adhere, and as a result, I’m resistant to a lot of drugs. But that’s changed, and now I can count the number of doses I’ve missed in the past two years on one hand. Plus, the number of pills I have to take each day has gone down to  nine.


Where did the name “One Tough Pirate” come from?

I was hanging out with this cop who also rode motorcycles. I had a legal prescription for marijuana, but I was 240 pounds and heavily tattooed. I was afraid if I ever got pulled over, a cop would be like “Yeah, right, you have AIDS,” because of the way I look. I asked Clark, the cop, about it, and he said, “Yeah, unfortunately the world operates in the way you look over reality, and if I saw you while on patrol, I would think you looked like a pirate that ate small children.” But then he said that if I opened my mouth and was as kind and calm as usual, they would believe me. So I went home and told my wife I looked like a pirate. And I thought that whole “don’t judge a book by its cover” lesson was really important for my speeches to kids about HIV. So I made it my website. I have pages and pages of letters that people have written me on it. They are heartfelt and poignant. I don’t put them up to toot my own horn but to show people the beauty of being honest and sharing your life story.

Why did you and your ex-wife agree to be the subjects of The Fire Within documentary, released in 2003?

My wife was going to pedal in the California AIDS ride and I was going to crew. We were at a meeting for the ride, and this beautiful woman came up to us and asked if we wanted to be in her documentary. We went home and talked about it and decided to do it. She followed us throughout the ride and in our home life for about a year. It’s a very vulnerable position to have someone filming you when you are sick and to trust them to tell your story with heart and compassion. The film was in some film festivals, like Edinburgh and Leone. I saw it at the LA premiere, and I had goosebumps. After watching so many friends die, I had told myself, I’m not going to die without leaving my mark and making a difference. It was like I had been immortalized. I could have just floated out of the room.

Is it true that you get a tattoo for every year of survival? What’s next?

I have 26 tattoos, and some are just dumb or from a biker rally. But most of them mean something. I have a blue bird with RIP written on it for the 20th anniversary of AIDS. Next, I want to get a phoenix on my back, rising.