The POZ 100-The Defenders 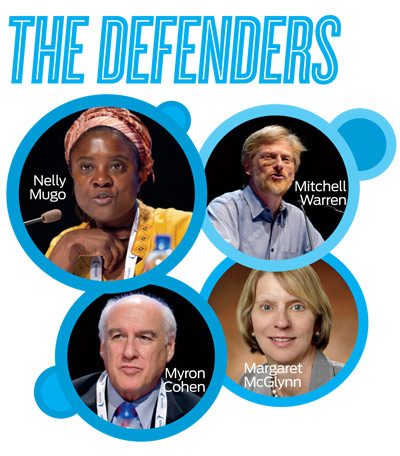 We can never end the AIDS pandemic with only an HIV cure. We’ll also need new technologies to prevent future infections. On that front we have what are called biomedical prevention efforts.

They include: pre-exposure prophylaxis (PrEP, when HIV-negative people take ARVs to prevent infection), treatment as prevention (TasP, the idea that positive people on successful treatment have lower viral loads and are thus less likely to spread HIV), male circumcision (particularly among heterosexual men in Africa) and microbicides (gels, creams or rings for vaginal and rectal use that can inhibit infection). Efforts to develop a vaccine slowly continue.

It’s true that medical approaches to prevent disease are sometimes met with skepticism—after all, few, if any, come without risks such as side effects and long-lasting problems like drug resistance—but the potential benefits of options now available appear thus far to outweigh potential risks. And importantly, research into kinder, gentler, easier-to-use and even more effective options continues steadily.

The 13 people below are some of the leaders in the biomedical prevention field who have helped usher in a new era of safer-sex tools and continue to advance the science and policy needed to reduce the number of new HIV cases.

Judy Auerbach
A “public sociologist” by training, Auerbach is a policy and research consultant who has worked tirelessly in the arenas of HIV/AIDS, women’s health and gender equity; she has a particular interest in advancing research that explores drivers of the epidemic and novel ways to prevent it. At AIDS 2012, she presented focus group research regarding PrEP attitudes among U.S. women.

Jared Baeten and Connie Celum
Both of the University of Washington in Seattle, Baeten and Celum led the landmark Partners PrEP study, which found 73 percent fewer HIV infections among HIV-serodiscordant heterosexual couples in Kenya and Uganda when the negative partner took a regimen of HIV meds. Partners PrEP helped pave the way for Truvada’s approval as the first-ever HIV prevention pill.

Deborah Birx
Managing a budget exceeding $1.5 billion, Birx oversees the U.S. Centers for Disease Control and Prevention’s international HIV activities. When it comes to global efforts to stem the tide of HIV transmission, you can bet Birx is helping lead the way.

Susan Buchbinder
At the Truvada-as-PrEP approval hearing in May, Buchbinder made clear that condoms and behavioral interventions alone have largely failed to end the HIV epidemic. She’s a strong proponent of PrEP and TasP. As a director of the HIV research section at San Francisco’s Department of Public Health, she’s working to roll out effective ARV programs that can be duplicated elsewhere.

Dennis Burton
With a seven-year, $77 million commitment from the National Institutes of Health awarded this past summer, Burton of the Scripps Research Institute in La Jolla, California, and his colleagues are figuring out ways to prompt the immune system to produce “broadly neutralizing antibodies.” The hope is that these will work better than regular antibodies, which do a lousy job penetrating HIV’s densely coated outer proteins and can’t stay one step ahead of the rapidly mutating ways of the virus.

Myron Cohen
A professor at the University of North Carolina at Chapel Hill, Cohen chaired a clinical trial that nearly single-handedly launched TasP efforts worldwide. The study, HIV Prevention Trials Network 052, found that ARV treatment reduces the risk of HIV transmission by up to 96 percent among serodiscordant heterosexual couples.

Barton Haynes
A Duke University professor, he heads the Duke Human Vaccine Institute and the Center for HIV/AIDS Vaccine Immunology. Haynes recently helped determine why some people in the Thai vaccine study (RV144) were more likely to either be protected or infected during the trial. It came down to two distinct types of antibody responses, a finding that will help drive vaccine research forward.

Albert Liu
What are the potential advantages and drawbacks of PrEP in the real world? Liu, director of HIV prevention intervention studies at the San Francisco Department of Public Health, is a lead player in the development of a demonstration project, to be conducted in San Francisco and Miami, exploring this key question.

Margaret McGlynn
Formerly the head of the global vaccine and anti-infectives program at Merck & Co., McGlynn currently serves as the president and CEO of the International AIDS Vaccine Initiative, one of the only nongovernmental, nonprofit organizations focusing solely on the development of safe, effective and accessible preventive HIV vaccines.

Nelly Mugo
An OB/GYN-trained physician at the Kenyatta National Referral Hospital in Nairobi, Mugo has spent a good chunk of her 14 years in HIV research dedicated to prevention research, notably the study of PrEP and vaginal microbicides—two strategies desperately needed to empower at-risk women to protect themselves against HIV.

Zeda Rosenberg
She heads the International Partnership for Microbicides, an organization based in Silver Spring, Maryland, with a singular mission to provide women with safe, effective and affordable products they can use to protect themselves against HIV, and to make these products available as quickly as possible where the need is most urgent.