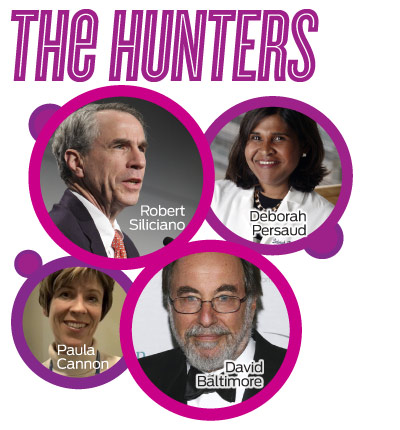 Most likely it won’t be a single person—or a single research team or institution—to discover the cure for HIV. Just like it was with AIDS treatment research, it will be a massive endeavor requiring monumental collaborative work between test tube and animal scientists, the biotech and pharmaceutical industries, government and nongovernmental organizations, clinical trial experts and, of course, study volunteers.

In addition to the Seekers on the previous pages, the 27 researchers below further exemplify the scientific leadership chipping away at the mystery of HIV persistence, many of whom are also testing novel ways to achieve either eradication or functional cures in the greatest number of people with HIV.

Much of their work wouldn’t be possible without significant funding from sources such as the Martin Delaney Collaboratory at the National Institutes of Health; amfAR, The Foundation for AIDS Research; and the California Institute for Regenerative Medicine.

Joseph Alvarnas and Richard Ambinder
The City of Hope National Medical Center and Johns Hopkins University researchers are enrolling HIV-positive cancer patients into a transplant study that will involve donors with the CCR5-Delta32 mutation that confers resistance to HIV. They’re looking to duplicate the results of Timothy Brown’s case.

David Baltimore
A 1975 Nobel Prize recipient currently at the California Institute of Technology, Baltimore is exploring why existing ARVs don’t clear HIV reservoirs—a step in figuring out what will work.

Paul Cameron
The Melbourne-based Monash University scientist is focusing on tissue-based dendritic cells, which can become infected with HIV but don’t produce new virus. Figuring out what sets these cells apart from others can potentially be applied to curative approaches.

Paula Cannon
Using zinc finger nucleases (ZFNs) to genetically alter CD4 cells is proving safe and effective in treatment studies. Laboratory work conducted by Cannon of the University of Southern California suggests it might be possible to do the same thing with stem cells to rebuild entire immune systems resistant to HIV, thus curing the virus. There are no studies in humans yet.

Koh Fujinaga
While some researchers find ways to tease out HIV from its hiding spots in reservoirs, Fujinaga of the University of California at San Francisco has set out to understand what, exactly, happens inside cells that end up sequestering HIV in the first place.

Hiroyu Hatano
Might a common blood pressure medication—an ACE inhibitor—successfully reduce fibrous tissue in lymph nodes, thereby allowing a more effective immune response against HIV, particularly in its hiding places? Hatano and her colleagues at the University of California at San Francisco are currently exploring this theory.

Frederick Hecht and Daniel Douek
Hecht of the University of California at San Francisco is working with Douek of the NIH (along with “Seeker” Sarah Palmer) to test their theory that ARV-unaffected immune system cells can make copies of themselves and the virus they contain, thus creating HIV reservoirs. Figuring out which cells are involved, and how, will allow researchers to design ways to clear the reservoirs and cure HIV.

Timothy Henrich
Was Timothy Brown cured of his HIV because of the chemotherapy, anti-CD4 cell antibody infusions, high-dose radiation or the HIV-resistant stem cells he received? It could have been one therapy or a combination of approaches. In working to figure out the answer, Henrich of Brigham and Women’s Hospital in Boston is helping drive new research. He also is investigating two more possible cure cases following bone marrow transplants.

Keith Jerome and Hans-Peter Kiem
Both of the Fred Hutchinson Cancer Research Center in Seattle, Jerome and Kiem are developing proteins known as endonucleases to target HIV. They’re also collaborating with Sangamo BioSciences to further study the use of gene therapies to render the immune system resistant to the virus.

Mathias Lichterfeld
The Massachusetts General Hospital researcher will explore whether a newly discovered group of CD4 cells, dubbed T-memory stem cells, are a main site of HIV reservoirs that re-emerge after ARV therapy is stopped. His group will look at drugs to purge virus from these cells.

Douglas Nixon
Did you know that several ancient viruses, called HERVs, are embedded in our DNA and can become reactivated? By exploring the antibodies our immune systems produce to control these viruses, Nixon of the University of California at San Francisco is hoping to develop a vaccine that can produce antibodies against another DNA passenger: HIV.

Deborah Persaud and Katherine Luzuriaga
The Johns Hopkins and University of Massachusetts researchers, respectively, have been studying a handful of adolescents who contracted HIV at birth yet have no detectable virus and are antibody negative after spending their childhoods on ARVs. How do their viral reservoirs and immune systems differ compared with people who became HIV positive as adults? They’re looking to find out.

Quentin Sattentau
“Big eater” (macrophage) cells can engulf cells containing HIV and potentially pass the virus along to other susceptible cells. Little is known about why this happens or what can be done about it; Sattentau of the University of Oxford hopes to learn more.

Rafick-Pierre Sekaly and Mike McCune
Sekaly of the Vaccine & Gene Therapy Institute of Florida and McCune of the University of California at San Francisco—in collaboration with “Seeker” Steven Deeks—have embarked on a seven-project initiative to define the nature and location of HIV reservoirs. Specifically, researchers hope to better understand how they’re created and maintained, and to test ways to eliminate them without broadly activating the immune system.

Robert Siliciano
The Johns Hopkins University scientist has irons in many cure research fires. His lab has tested Timothy Brown’s blood samples, as well as a variety of drugs with the potential to purge HIV reservoirs. And by looking at HIV-infected CD4s exposed to HDAC inhibitors, the lab hopes to determine why some cells appear reluctant to release their viral payload.

John Tilton
Some CD4 cells abort HIV infection; others go on to produce new virus immediately; and yet others end up locking the virus away. Tilton of Case Western Reserve University is focusing on these CD4 cell “subsets” to understand how HIV reservoirs are established and maintained.

Linos Vanderkerckhove
Curative treatments are only as good as the tools available to detect low (or no) virus in samples. Vanderkerckhove of Ghent University Hospital in Belgium is developing a new test to measure the size of the reservoir and what happens to it in the presence and absence of HIV treatment.

Bruce Walker
Many scientists are focusing on ways to purge the virus from otherwise unreachable cells—the so-called HIV reservoirs. Walker and his colleagues of the Harvard Center for AIDS Research are instead focusing on the mechanisms of immune control that help some people keep the virus tucked away without the need for ARVs. His work with long-term nonprogressors and elite controllers is considered to be an integral component of functional cure research.

John Young
Sulfonation is a type of chemical modification that needs to occur inside cells so that the virus can reproduce. Young, of the Salk Institute, thinks it may be possible to manipulate this, using safe and effective drugs, to help purge the virus from inactive cells in the body.