Out of the Shadows

During the XIX International AIDS Conference (AIDS 2012) in Washington, DC, last year, Paul Semugoma, MD, gave a passionate speech on behalf of both LGBT and HIV-positive people. Coming out as gay during the speech made it even more memorable.

As a private physician in Kampala, he specialized in researching HIV/AIDS among vulnerable communities in Uganda, including LGBTs. He shares why he came out, the aftermath of his speech and his hope for change. 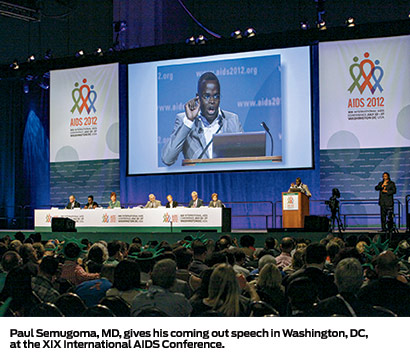 What is the state of the epidemic in Uganda?
The picture is very mixed. We have a mature generalized epidemic. There are about 33 million people in the country. About 7.3 percent of adults in Uganda have HIV, up from about 6.4 percent in 2010. There was a time when at least 18 percent of adults were HIV positive. The percentage of adults with the virus has flatlined for more than 10 years, while prevention efforts have become stagnant. Of those who are positive, about 40 percent know they have the virus.

The figures show that HIV is still not under control. We are not yet optimally covering those who are infected. Using the less than 350 CD4 cells criteria, a third of Ugandans with HIV are eligible for antiretroviral (ARV) treatment and about half of those are on ARVs. Our health care system is generally in shambles, which tends to mean that prevention is the most important path for most of our people.

How are men who have sex with men (MSM) affected?
There has been a systematic denial of the very existence of MSM, which has made LGBT people invisible in all aspects of prevention and care. Data from a 2008 study released in 2009 showed an HIV prevalence among MSM in Kampala of 13.4 percent, compared to 4 percent among all adult men in the city. A follow-up study is reportedly under way.

Those were the very first figures in the country on HIV among MSM. For a country famous for the success of its prevention efforts, it’s remarkable there had been no knowledge of this key population before.

There is no culturally competent care for MSM, with most unable to come out to their health care providers. Officially, health ministry officials believe they do not discriminate because they don’t ask about the sexuality of their clients.

The anti-homosexuality bill would make HIV prevention efforts for MSM much harder. It was proposed by David Bahati, a member of the Ugandan Parliament. Its aim is to make sure that homosexual relations don’t happen in Uganda. Punishments for violating it include death for serial offenders who are HIV positive.

The bill was first introduced in 2009. It has not been passed, but it is still on the agenda for Parliament.

Why did you come out at AIDS 2012? What has been the aftermath?
I was tired of hiding. It’s been a long journey. When I started work on LGBT rights in Uganda, I couldn’t say that I was gay, because that would have been a career killer. I worked under the guise of a concerned health professional who works on HIV prevention and care for all Ugandans, but with an emphasis on marginalized and vulnerable populations, including gay men.

What I did led to a lot of whispers about my sexuality. I wouldn’t confirm the rumors, of course, though I was very aware of them. But, I was quite happy to push the scientific agenda. At AIDS 2012, the time had come for me to come out. It was time for me to articulate that I actually had firsthand experience of what I was talking about, as a professional and as a human being.

Immediately after I came out, I felt the cold shoulder of my Ugandan colleagues who heard the speech at the conference. I had prepared for the fallout by making sure that I was not going back to Uganda right after the conference. I left for South Africa to be with my partner and family in Cape Town and have been there ever since.

It was a retreat, but it was necessary. The memory of [Ugandan LGBT activist] David Kato’s death was very much on my mind. It would have been very difficult for me to be openly gay in Uganda. By the time I go back to Uganda, I hope more progress for LGBTs will have occurred.

At AIDS 2012, you said we have to end invisibility in epidemiology. What did you mean?
HIV is a very visible problem. It is in the news and on the Internet. But some people in Africa are pariah enough that they are invisible, such as gay men.

From the beginning of the pandemic in the early 1980s, it was known that gay men were particularly at risk of HIV, but there were few epidemiological studies about them in Africa. More have been done in the past 10 years, but they have been preliminary studies that barely start to describe the situation.

Health ministry officials pointed to the data available and said homosexual sex is either not present or is completely irrelevant in Uganda. That position is still articulated in many other African countries, where even basic studies cannot be done.

Invisibility makes a perpetuation of the status quo and comforts those homophobes who don’t want HIV pre-vention programs because we are “criminals.” Epidemiological visibility is a tool for activism and awareness.

What roles do homophobia, stigma and discrimination play in Uganda?
The level of stigma for LGBTs in Uganda is an overwhelming, everyday thing. It’s impossible for a day to go by without being reminded you are behind enemy lines, so to speak, and that revealing who you are can elicit an adverse reaction, in whatever place you are.

Telling your doctor you are kuchu is a no-no, whatever the circumstances. People used to phone me for consulta-tions from all over the country, because they knew me as a gay doctor. At the time, I was working for a company in private practice, but not on my own turf, so I could only give a free consultation.

Living in South Africa has opened my eyes to the fact that in Uganda, at all times, I was wound up, always seeking to hide and camouflage myself. That was a lifelong thing, and it happens to all LGBTs, except for the few who get to the point of braving the actual coming out process.

Homophobia is a given in the country and society. The stigma is something we live with, to the point when our self-stigma is huge. When evangelical pastors throw around accu-sations of homosexuality and go on virtual witch hunts, in the eyes of most Ugandans, it is justifiable. They are outing the “evil” homosexuals.

Gay men in Uganda remain highly vulnerable to HIV. Services are not available. Even simple condom com-patible lubricant is unavailable in the country. Myths that they are not vulnerable to HIV come up again and again from younger gay men.

What is the future for gay men with HIV in Uganda?
At the moment, the actual future is that of remaining hidden. Because being gay and having HIV is a double stigma that would make everything else a problem, unlike a positive heterosexual Ugandan.

But your psychosocial and psychosexual needs are never going to be embraced or met in the short and medium term. You would almost never dare be open to health care providers, which is a big pity. But that is reality.