Rethinking the Birth of AIDS

When Jacques Pepin spent four years in the 1980s treating sleeping sickness in Democratic Republic of Congo, he encountered antiquated medical practices that later sparked an idea: Such practices could have played a major role in the HIV/AIDS epidemic. Pepin, now a professor in the Department of Microbiology and Infectious Diseases at the Université de Sherbrooke, Canada, pursued the question, producing research that eventually became The Origin of AIDS, published in October 2011. 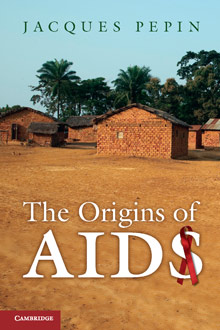 Pepin’s account of how the virus likely crossed from chimpanzees and spread through humans in central Africa overturns earlier theories of the epidemic’s history. Using evidence-based science, he implicates colonial-era medical campaigns in unknowingly spreading HIV through routine intravenous injections to treat infectious diseases such as syphilis and sleeping sickness.

In his final chapter, Pepin warns the medical community that “well-intentioned human interventions can have unpredictable and disastrous microbiological consequences.” But the book is not only for clinicians and scientists. People living with HIV, he says, also need to know how the virus eventually reached them.

Pepin hopes his book will help counter years of speculation and the conspiracy theories and blame games that have fueled the stigmatization of HIV/AIDS. With an evidence-based history of HIV, we can refocus the discussion on what to do next in responding to HIV/AIDS.

Let’s start with the obvious question: Why write a history about the origins of HIV/AIDS?

Covering the period from 1981 to present, there’ve been dozens of books that have explained the history of HIV in the United States, in South Africa, in India and so on. But there was very little on what happened before 1981. There was only one book called The River, which proposed that [the emergence of HIV] was somehow related to the use of an experimental vaccine against polio. That hypothesis has been proven wrong. So basically, there was no good history of the emergence of HIV/AIDS.

Is mapping the early history of HIV still relevant as we approach 2012?

There are two reasons to be interested in the history of this infection. The first is a moral obligation toward the victims—32 million people so far have died from AIDS, and I think we owe it to them to try to understand what happened. The second reason is that there are some general lessons that can be learned from that story, which hopefully could prevent us from provoking a similar disaster in the future.

You write that HIV and SIV—the simian version found in chimpanzees—have been around for much longer than was previously thought.

The chimpanzee virus, which is the source of HIV-1, has been present among the chimpanzees of central Africa for several hundred years—maybe a few thousand years. And it’s certain that hunters [before the 20th century] got infected by the virus while cutting up chimpanzee meat to cook it. But [back then], eventually the hunter infected his wife sexually—or vice versa—and then both of them died of AIDS 10 years later in their village, and it didn’t spread.

How did 20th-century changes to life in central Africa amplify the spread of HIV?

Around 1921, another hunter was infected and then from that single person, eventually, 65 million people got the virus. At this time there were two factors that made it possible for the virus to spread so successfully. I believe that both were necessary; if we remove one of them, I think probably it wouldn’t have happened. Both factors were related to the European colonization of central Africa.

One factor was [increased] sexual transmission, facilitated by the urbanization of central Africa and the prostitution that followed. The colonizers created cities in which there was a gross excess of men over women, because they only needed the men [to labor for] private companies and for the government. This imbalance quickly led to the development of prostitution on a substantial scale in these cities. That’s number one. And number two was the transmission through injections that occurred during public health campaigns created in the French colonies and instituted by the Belgians on the other side of the Congo River. The campaigns were meant to control a few very common infectious diseases, such as sleeping sickness, syphilis and yaws—a skin disease that looks a lot like syphilis.

People who had the diseases were treated in their own village. They got an intravenous injection once a week for something like 15 weeks, and the syringes and the needles, of course, were reused constantly, because they were not aware of the risk of transmitting viruses through these routes. At the time they knew very little about viruses in general.

What about sterilization between uses?

[Some of] the documents I found showed that in several places there was no attempt even to boil the syringe and needle between patients. They would just rinse with water and use it on the following patient.

Your book calls public health campaigns most likely the major factor in the earliest spread of HIV. How is that possible?

You remember that very first patient, the hunter? I estimated that the likelihood that this hunter would eventually move to a city, have sex with a sex worker there and transmit the virus was something like 1 percent or 2 percent, at most. Whereas the risk that this same hunter in most parts of central Africa would eventually be found to have some infectious disease and be treated in his own village with intravenous drugs was probably between 50 and 100 percent.

Then eventually from a single hunter at least a few hundred people were probably infected through the injections. Once that number reached critical mass, it became unavoidable that the virus would spread outside of this village or hospital. It presumably spread mainly [along] the Congo River and its many tributaries through people who were traders, who traveled down the river to buy and sell their goods. And these people eventually had sex in the cities there and transmitted the virus to other people. So I think these two factors—these public health campaigns and the increase of prostitution because of urbanization—were essential, and both were related to the colonization of central Africa.

You write that “well intentioned human interventions can have unpredictable and disastrous microbiological consequences.” Can you elaborate?

There is no doubt that these medical interventions were quite effective at reducing the impact of a few of the very common infectious diseases, reducing the incidence and impact of sleeping sickness, for example. They benefited the Africans to some extent. But they also benefited the colonial system, because their other goal was to be useful for the colonial project. You needed workers for the companies for the plantations, for the mines, and so on. And if you wanted workers you had to keep them in good health.

These [“well-intentioned”] interventions eventually, in my opinion, led to the emergence of HIV/AIDS.

Yes. I think the technology to investigate emerging infections is infinitely better now than it was in 1981. For example, look at H1N1, the influenza virus that spread two or three years ago in Mexico and from there to the United States and Canada. When it emerged in Mexico, within a few weeks—even a few days—the whole genome of the virus was sequenced. People had the tools to determine rapidly that it was a mixture virus from humans, pigs and birds or chickens.

In 1981 it took a few years before the virus [causing AIDS] was identified. The tools that they were using then for detecting viruses, the cell culture and so on, were difficult and not very effective. Since then there’s been really dramatic improvement in molecular biology.

Your history of HIV is also a history of modern medicine. Do you think the medical community has learned its lesson about “well-intentioned” medical interventions and unpredictable consequences?

I think time will tell, and we’ll see how my book is accepted by the medical establishment. I hope the lesson will be taken. I really hope that people who read the book will think in the future, “OK, let’s be cautious when we do this.” In the final chapter I give an example—the idea of sending some humans to the planet Mars and bringing them back to the Earth. We have to think really hard—is that really a good idea?

Are there safeguards that should be put in place?

Whenever novel interventions or approaches are developed, we need to maybe be more cautious and proceed slowly. At various steps of the process, [researchers should] try to make sure that there are not unintended consequences. For example, gene therapy—well, OK, it’s interesting, we might be able to treat very difficult diseases. But we have to make sure that by doing that we’re not causing some other unpredictable problems. We should monitor the possible emergence of unpredictable consequences before it is too late.

Previous histories and theories about how HIV came into being blamed one group or another, but your story seems to focus on the complexity of facts instead of casting blame. Do you feel The Origins of AIDS will reduce stigma?

Absolutely. I’m not blaming anybody. There was a lot of transmission, I believe, in the early stages of the epidemic through medical interventions. But honestly, if I had been a doctor working in Africa in the 1930s I would have done the same thing these people did. There was no way they could [have] predicted what would happen. So I think the idea is not to lay the blame on anybody, but just to tell the story. Then, at the end, I try to draw lessons from that history. Other people maybe would draw different lessons, and that’s OK.

But blame should not be laid on any person or individual. Certainly this famous story of Patient Zero—the French Canadian airline steward, who was [falsely] identified as having started the epidemic—I think this story of Patient Zero becomes difficult to sustain if you read the whole story in my book. This guy certainly traveled a lot. He might have infected, I don’t know, a few dozen other gay men he had sex with. But to lay the blame [of the entire pandemic] on that person, I think that was really unfair.

As the book shows, it’s a complicated story. There’s been so much work on the virus in many countries around the world. No other infectious agent has been inspected as thoroughly as HIV, so it’s possible to put all the pieces together. And that’s what I’ve tried to do in the book.