AIDS on the Political Stage

This year’s U.S. presidential race has already had its share of political gaffes. But when it comes to making mistakes about HIV/AIDS, some politicians have unapologetically clung to their misguided positions that stigmatize people living with the virus. For example, in a January Fox News interview, U.S. Representative Ron Paul (R–Texas), a Republican presidential candidate, defended his 1987 statement claiming that a person with AIDS is a “victim, frequently of his or her own lifestyle.” Paul went on to link HIV/AIDS with promiscuity, saying the health care market should “sort out” the problem by imposing higher health insurance costs on people with HIV. He also suggested that other citizens not be asked to cover the cost of health care for HIV-positive people. Understandably, Paul’s comments sparked an outpouring of responses to a POZ blog highlighting his gaffe. 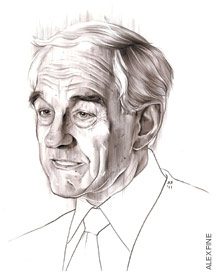 There is a disconnect between the Republican Party and the real world we live in. I was infected as a 15-year-old in the ’80s. We knew almost nothing about AIDS. So do Ron Paul and other Republicans think I should not be allowed to live and try to make the best of a horrible nightmare that stole my youth? Republicans should reread their Bibles about Christ’s compassion and His commandment to “Love thy neighbor.”
—Rick, Location Withheld

[Ron Paul should] qualify his beliefs about free markets with explanations of how [HIV-positive people] are a captive audience with no choice but to consume antiretrovirals and medical care at a several thousand percent markup. He has not chosen to do these things, despite the ability to say what he means.
—Andy, Location Withheld

I hate when people lump all [Republicans] together. After all, George W. Bush has done more to fight HIV/AIDS than Obama has. Ron Paul believes in a world where everyone is self-sufficient—but that world was the Garden of Eden, and it doesn’t exist anymore.
—Agnes, Greensboro, NC

What’s important when it comes to HIV is not how someone contracts the illness. What is important is that the person be able to get into care and be able to afford it. Paul’s opinions are very clear reasons why health care in America should not be rationed on the basis of individual wealth. My life—the lives of everyone—is just as valuable as the life of the next person. To believe otherwise is offensive to our shared humanity.
—JJBearPhx, Phoenix

Paul’s position is not based on hate or ignorance; it’s based on a philosophical belief that people should not pass their [health care] costs onto others. I do not agree with him 100 percent on this issue, and I do believe in 100 percent access to health insurance. But he was technically correct about smokers paying higher premiums. And the smoking analogy is quite apt [in some cases]: A person may not have intended to get HIV through [unprotected] sexual activity, and smokers don’t intend to get cancer by their activity either. I’m an HIV-positive gay man, and I will be voting for Ron Paul in my state’s Republican primary.
—Magnus, New Hampshire

I have worked in the HIV field for 13 years. It’s no wonder that people living with HIV/AIDS have to deal with stigma when so many people blame them for getting HIV in the first place. This is the first time I have heard it said publicly. I hope it’s the last time. Disgusting.
—D. Beck, Texas