See You in the Lobby

Every May, nearly 500 people living with HIV travel to Washington, DC, from as far as California and Puerto Rico to remind their congressional reps who’s boss. AIDSWatch, a lobbying assault by the National Association of People With AIDS (NAPWA), will span May 17 to 19. NAPWA helps ship in constituents and shape them into eloquent lobbyists. Richard Hahn of Albany, New York, said, “To be in a room with 300 to 500 PWAs…you feel like your voice really counts.”

Both the Ryan White CARE Act (providing medical care and other HIV services) and its AIDS Drug Assistance Program (ADAP) are reauthorized every five years, and 2005’s another big one. This year, Congress will be preparing for a vote to either keep the programs until 2010 or axe them. A more likely threat to Ryan White, even as HIV rates rise, is flat funding (no increase). President Bush has proposed a 5 percent ADAP boost—a small victory attributable to last year’s lobbyists.

You needn’t invade DC to make a difference. Chris Poorman of rural Pennsylvania organizes letter campaigns. “I go to our local food bank to explain why HIVers must send strong messages,” she said. “Almost to a person, they send letters.” NAPWA also helps folks visit officials in their home districts. Near or far, NAPWA’s Paul Feldman urges you to bend your reps’ ears: “People living with HIV are the best medicine for members of Congress.” 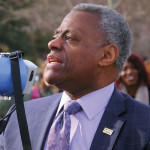