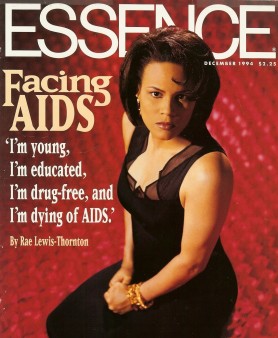 “Ain’t I?” They grin. The 34-year-old former political organizer for Jesse Jackson is sassy, sexy and smart as a whip, and she works it for all it’s worth. “I ask them, ’How many of you guys would have sex with me?’” Lewis-Thornton says later, curled on a couch in her Chicago apartment, “and they all raise their hands -- even some of the teachers raise their hands.” And then she drops the bomb.

"You mean you got AIDS right now?“ the boys ask. ”Like, this very minute?“ It’s true she doesn’t look ill in her size-four business suit. But only a year ago, she wore a 12. ”By the time you walk across the stage for high-school graduation,“ she says quietly, ”I’ll be dead."

Since 1993, Lewis-Thornton has taken a fierce brand of AIDS activism to inner-city schools, conservative black churches and the readers of Ebony. Her blunt, charismatic campaign has landed her on the cover of Essence. And last January, the CBS affiliate in Chicago, WBBM Channel 2, featured her in a news story and found her so polished and devastatingly honest that it hired her as a contributing editor. The result: A remarkable series of seven first-person segments on life with AIDS, each nearly five minutes long -- an eternity in TV news -- and a team of telephone counselors who fielded questions about HIV until midnight. Reaction to the series was so strong the station renewed Lewis-Thornton’s contract last summer for several more episodes and is exploring airing the programs in other markets.

Lewis-Thornton had always planned on fighting her way to the bigtime. It just wasn’t supposed to happen like this.

Rae Lewis’ parents were heroin addicts, and her father was killed when she was three years old. She was raised by an abusive alcoholic grandmother in a poor neighborhood in Chicago -- yet pushed herself to graduate magna cum laude from the University of Pennsylvania. An obsessive workaholic and “quintessential Buppie,” Lewis-Thornton played by all the rules: Church, no drugs, no drink, no one-night stands. By 1984, she was the national deputy youth director for Jackson’s presidential campaign and was fast becoming a rising star behind the scenes in black national politics. And then, during a shortage in the blood supply in 1986, she organized a blood drive. After she gave blood herself, a Red Cross counselor told her she was HIV positive. When Lewis-Thornton told her then-boyfriend, he grabbed the laundry she had washed for him, called her a bitch and stormed out of her apartment.

She told almost no one about her status for seven years, working on Jackson’s 1988 campaign and helping Carol Moseley Braun become the first black woman in the U.S. Senate. But when her declining T-cell count plunged her into full-blown AIDS in January of 1993, her health couldn’t withstand the pace of politics and the secrecy became too much to bear. “I got tired of hiding it, and how crazy it made me,” she says. She launched her education efforts, and it didn’t take her long to attract attention. At a banquet where she was receiving an award, Lewis-Thornton stepped to the podium and announced, “The black community is in massive denial. There have been men hitting on me all night long, men sitting by their girlfriends and wives. Don’t you know that not only am I HIV positive, I have full-blown AIDS?”

“Their mouths fell open,” she recalls. "And when I walked off the podium [Ebony editor] Susan Taylor grabbed me and said, ’Can we do a story on you?’"

Her work (she calls it a ministry) is to hammer home the need for HIV testing, openness about being positive and always using latex condoms -- pretty standard stuff. But her positions aren’t without controversy, particularly because Lewis-Thornton refuses to sugarcoat her condition. “People in the AIDS community tell me quite frequently, ’You talk about death a lot -- why do you do that?’” she says. "Because I’m dying. When I go out and speak to a group of people, especially young kids, and I walk up there in a $400 suit looking like, Mmmm!, they don’t see the disease. I don’t want them walking away thinking, ’Well, shit, if AIDS is like this, I can hang.’"

That’s not to say Lewis-Thornton has stopped having a life. “The day I stop living will be the day I die,” she says. In 1993 she took a more forward-thinking step: Marrying Kenny Thornton, a man she met in her church. HIV negative, he gets tested every six months, and says he understands the risks their sex life presents to him, even practicing safer sex.

Meanwhile, Lewis-Thornton brings the risk of AIDS home to others. Besides her ability to work a crowd, perhaps Lewis-Thornton’s greatest asset is that the mostly black, straight audience she targets considers her one of their own. “I’ve been in schools where they’ve had gay men talk about AIDS who actually got laughed at and disrespected, because the young black boys are saying, ’Aw, man this faggot can’t say shit to me,’” she says. “They can’t hear the message because of the messenger.”

After years of political organizing, Thornton-Lewis knows better. As she puts it, “I was taught that you don’t send that brassy New York organizer into Mississippi.”