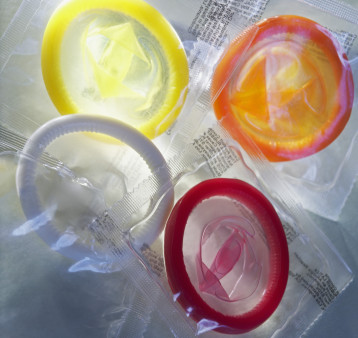 Tales of the (Safer Sex) City

With barebacking all the rage and HIV on the rise, the boys of West Hollywood babble on about whether or not to get gay bars to serve up the latex.

It all started one afternoon in early 1999 when Michael Weinstein took a walk down Santa Monica Boulevard, along that glittering avenue of stores, restaurants, boutiques and gay bars in West Hollywood known as Boys’ Town. Weinstein, president of the AIDS Healthcare Foundation (AHF), the nation’s largest AIDS care provider, had just stopped for some juice at AHF’s coffee shop -- a packed den called WeHo Lounge that features gourmet treats, community forums and HIV testing -- when he decided to head next door to Micky’s, a popular gay dance bar, for a glance at the guys. That’s when he noticed that Micky’s condom bowl was empty. And when he popped into other bars on the strip -- Hunters, Mother Lode, the infamous Rage -- he found the same.

For several years, the City of West Hollywood had paid for and distributed some 30,000 condoms a year to local night spots. But the bars, it struck Weinstein, were not doing their part to distribute them.

So began a two-year crusade by Weinstein that threw this pastel town -- a two-square-mile enclave surrounded by Los Angeles and Beverly Hills where one-third of the 40,000 residents (and more of the club patrons) are gay -- into its hissiest fit ever. This skirmish in the sex wars is playing out in a town where gay men dominate the local government, and gay bars (the town’s cash cows) and AIDS organizations (its main machers) call the shots.

West Hollywood has the highest number of AIDS cases per capita in the state; with only half a percent of LA County’s population, the town is home to 7 percent of the county’s PWAs. And the Centers for Disease Control and Prevention recently reported that half of 548 men under age 30 surveyed in West Hollywood said they’d had unprotected sex in the previous six months. Here, condoms -- and all they’ve come to represent -- are a central political issue.

They’re also an issue for the community. Announcing this past January that “it’s my responsibility to say that many people would not have unsafe sex if our sex establishments talked about it,” Weinstein launched a petition drive that will put a sweeping condom-distribution initiative, the Safer Sex City Act, to a March 2001 vote. If the measure passes, it will increase city-purchased condoms to 500,000 per year. It will also be the first mandatory condom-distribution measure in the country.

But the March ballot measure is just the latest episode in the high-stakes soap opera this issue has become. The season opener aired in February ’99, with a different referendum -- the Safer Sex City Ballot Measure. This ordinance may have been motivated by Weinstein’s panic that the gay community was in denial about safer sex, but critics say it overreached: It sought not only to force bar owners to stock condoms in visible locations, but to exempt nonprofits from city parking regs and limited city funding for nonprofits based outside West Hollywood.

Weinstein’s tactic didn’t thrill the West Hollywood City Council, where three of five members are openly gay, and all three have received campaign support from bar owners. “I opposed it,” sniffs then-council member Jeff Prang, now the city’s mayor. “It included too many unrelated issues, and I thought that the most prudent way to effect public policy was through a legislative alternative rather than the ballot.”

Groping for a compromise, Prang called a meeting of bar owners, city staff and AIDS advocates. No bar owners came. “We were giving out condoms long before AHF showed up on the scene,” snarls Michael Niemeyer, the longtime owner of Micky’s. Prang and council member Paul Koretz moved ahead, instructing city staff in July ’99 to draft a different love-glove-giveaway plan to present to the council. Like Weinstein’s plan, this proposal made condom display the law; unlike Weinstein’s, it exclusively targeted “high risk” establishments, which everyone understood to mean gay. Weinstein signed on.

The gay bar owners didn’t. With Niemeyer in the lead, they banded together to run full-page ads in the gay mag Frontiers calling for apologies from Prang and Koretz, trashing the West Hollywood city staff and charging that the proposal discriminated against gay men and scapegoated gay bars. “Selected business owners,” the ad harrumphed, “were not given the opportunity to voice their concerns prior to the vote.” (Prang says that he did formally invite gay bar owners to comment.)

Niemeyer also charged that Weinstein and Prang were playing into the hands of the right wing, making political hay by thrashing the gay community. “Bars have traditionally organized gays and have also been targeted by homophobes,” he said. “Every time you divide lists based on sexual orientation, you are on a bad footing, especially if the administration changes for the worse.” And he accused Weinstein of being an opportunist (Weinstein ran for LA City Council in the ’90s), whose organization, AHF, stood to gain from condom-handout handouts. This charge AHF flatly denies.

Weinstein got his activist start in the mid-’80s when the gay community was up against a homophobic County Board of Supervisors (one member, Michael Antonovich, famously said, “The only way to stop AIDS is if gays would turn straight”) and a ballot initiative backed by ultrarightist Lyndon LaRouche that sought to quarantine PWAs. Weinstein staged a demonstration at Antonovich’s home, during which gay ministers prayed for the supervisor’s soul. Overnight, Weinstein became a local hero. And then a local czar. In a short period of time, he built AHF’s successful network of AIDS clinics, hospices and hospital suites.

But with success came backlash. ACT UP called Weinstein a sellout; behemoth AIDS Project Los Angeles (APLA) said he was a loose cannon, violating community consensus when he called for mandatory HIV testing of newborns and offered support for names reporting. A catfight erupted between the two groups in the early ’90s over APLA’s glitzy AIDS Walk. AHF said not enough dollars went to disenfranchised groups and planned its own competitive walk. The meltdown only cooled after AHF emerged as the larger, more influential agency. But Weinstein’s condom measure got tongues wagging again.

In the months that followed the council compromise, the safer-sex debate hit high gear. Niemeyer found his own allies on the city council -- John Heilman and former Stonewall Democratic Club president Steve Martin -- both openly gay and loudly opposed to Weinstein’s plan. They agreed that there was a crisis in prevention among local gay men but argued that solutions had to go much deeper than traditional tricks like free condoms. In an op-ed piece in Frontiers, Martin advocated instead for new prevention strategies such as street outreach and one-on-one counseling. “When politicians jump into public health issues, whether Jesse Helms or wannabe messiahs in West Hollywood, we never come up with policies that fit the community,” Martin wrote.

But Wendell Jones, a longtime AIDS activist and frequent Weinstein foe, says Martin and Valenzuela have their heads in the sand. “No measure is going to stop HIV transmission 100 percent of the time,” Jones quietly fumes. “But if you are drunk in a bar and about to go home and have sex, you might think twice about barebacking if there’s a condom sticking in your face or a safer sex poster over your head.” Bar owners don’t display condom bowls, he said, because “condoms remind people of death and reality, and that’s not what people go to bars for.” Jones said the owners needed a push.

In January 2000, the West Hollywood City Council, responding to the bar owners’ point of view -- or at least to their political and economic clout -- dropped the word mandate and voted 5 to 0 to maintain a voluntary condom distribution plan. The council promised to monitor cooperation and revisit the plan after one year.

But by then one survey conducted by Frontiers and another by AHF had confirmed Weinstein’s prediction of poor compliance; AHF showed that 65 percent of bars displayed no condoms -- or even empty condom bowls. Fed up, Weinstein came out of the bars and into the streets, gathering 4,634 signatures (twice the required number) by January 2000 to put the Safer Sex City Act up for a vote in the March 2001 election. This time, Weinstein steered clear of targeting gays, with language requiring that any establishment that makes more than 50 percent of its revenue from alcohol be required to make free, city-purchased condoms available to their patrons.

Within a week of Weinstein’s second proposal, discussions in AOL Internet chat rooms began to suggest that Weinstein was dangerous, worse than Dr. Laura or Jesse Helms. And then the posters appeared. With an unflattering portrait of Weinstein and the captions “CONDOM NAZI” and “enemy of the gay community,” they materialized on the walls of bars and restaurants throughout West Hollywood. They asserted that Weinstein’s campaign was really devoted to making “money off AIDS.”

It’s not exactly clear who made the posters (bar owners deny any involvement), though AOL chats obtained by POZ indicate that a handful of apparently unaffiliated barebackers may have been behind them. Even as city council members touted the success of their voluntary plan (condom distribution had gone from 30,000 to 300,000 a year), the harsh tone of the posters seemed to rally support around Weinstein. Suddenly, a local rabbi, Denise Egger, was leaping to Weinstein’s defense, condemning the attack posters’ Nazi slogan as anti-Semitic. (Weinstein is Jewish.) Paul Koretz, too, slammed the “Nazi” rhetoric.

Sympathy for Weinstein mounted with a headline-grabbing March 23, 2000 announcement from the local health department that 26 cases of syphilis had been reported in Los Angeles County. “We are getting a wake-up call,” pronounces Prang. “The syphilis outbreak guarantees that unless we are doing our job on a voluntary basis, the AHF initiative will pass.” This past August, a professional pollster hired by AHF found that 55 percent of West Hollywood residents backed Weinstein’s mandatory plan over the voluntary plan now in place. Weinstein’s position, for the moment, has won the day. Of course, as the March vote approaches, a tempest may again wash over Tinseltown.

A philosophical Weinstein says that the furor is good for the community. It explodes the denial of unsafe sex that saturates the red light district in Los Angeles and highlights the warring theories about how -- 20 years into an epidemic with no end in sight -- to get gay men to use condoms as a way of life. With Weinstein spouting the old-fashioned condom code, Martin touting new-school, grass-roots measures, activists like Jones calling for a return to gay-lib principles of self-empowerment, and even barebackers backing their credo, the crisis in gay HIV prevention is clearly out of the closet.

Meanwhile, the condom bowl at Rage was getting low on a recent summer night. One young man POZ spoke with, 22-year-old Jimmie Smith, dug his hand deep into the dish to nab a personal supply. Smith’s vote on the ballot measure isn’t in question. “Condoms are expensive,” he says. “Any chance to get them for free is great.”

California May Outlaw Stealthing, the Removal of a Condom Without Consent