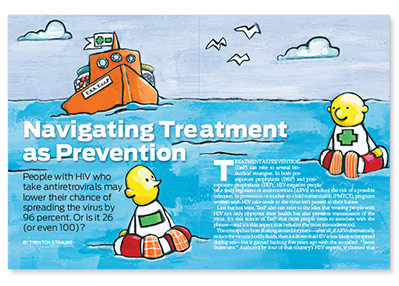 Treatment as prevention (TasP) can refer to several bio-medical strategies. In both pre-exposure prophylaxis (PrEP) and post-exposure prophylaxis (PEP), HIV-negative people take daily regimens of antiretrovirals (ARVs) to reduce the risk of a possible infection. In prevention of mother-to-child transmission (PMTCT), pregnant women with HIV take meds so the virus isn’t passed to their babies.

Last but not least, TasP also can refer to the idea that treating people with HIV not only improves their health but also prevents transmission of the virus. It’s this notion of TasP that most people seem to associate with the phrase—and it’s this aspect that remains the most misunderstood.

The concept has been floating around for years—after all, if ARVs dramatically reduce the virus in bodily fluids, then it follows that HIV is less likely to be spread during sex—but it gained backing five years ago with the so-called  “Swiss Statement.” Authored by four of that country’s HIV experts, it claimed that an HIV-positive person on ARVs and with an undetectable viral load and no sexually transmitted infections cannot transmit HIV through sexual contact.

The statement, however, was based on “review of the medical literature and extensive discussion.” In 2011, the supporting data arrived from the HIV Prevention Trials Network when its HPTN 052 trial found that, for heterosexual couples, starting early treatment led to a 96 percent reduction in HIV transmission to the negative partner. The news made global headlines. The journal Science named it “the 2011 Breakthrough of the Year,” and Time magazine listed treatment as prevention as the year’s No. 3 medical breakthrough.

HPTN 052 researchers, led by Myron Cohen, MD, the director of the Institute for Global Health and Infectious Diseases at the University of North Carolina, enrolled 1,763 serodiscordant couples—in which one person has HIV and the other doesn’t—in nine countries. The study, which began in 2005, is ongoing. The couples were divided into two groups: In one, the positive partners started treatment immediately; in the other, they waited till their CD4 counts dropped below 250 or they had an AIDS-related illness. Everyone received regular counseling and care—any sexually transmitted infections, for example, were treated—and they were provided with and encouraged to use condoms (although there were more than 200 pregnancies). All HIV-positive participants attained an undetectable viral load.

By February 2011, the study recorded 28 cases of HIV infection linked to the positive partner. An additional 11 negative participants contracted HIV, but the virus was not genetically linked to their positive partner, which illustrates that the couples were not necessarily monogamous. Only one of the 28 cases occurred in the early treatment group, and it took place shortly after the trial began, when the positive person was probably not yet undetectable.

HPTN 052 is a clinical trial following highly motivated and monitored participants. How will its results hold up in the real world? To find out, Chinese scientists looked at already existing data on nearly 39,000 serodiscordant couples from 2003 to 2011. Despite lacking crucial details, such as whether people with HIV were undetectable, the researchers found an overall prevention benefit of 26 percent. Cohen sees this as “a positive message—that at a population level, you still see a benefit.”

On an individual level, the news looks even brighter. In January 2013, the U.K. Health Department published position papers by two leading AIDS groups—the British HIV Association (BHIVA) and England’s Expert Advisory Group on AIDS (EAGA)—stating that when the positive person is on successful treatment and three criteria are met, the risk of transmitting the virus through vaginal transmission is “extremely low”—as in, it’s  “as effective as consistent condom use.” Those three conditions, according to what’s already being called “the U.K. Statement,” include:


Fulfilling these criteria may seem straightforward, but there are caveats. For example, it’s possible to have an STI and not be aware of it. STIs are problematic because they increase inflammation, spurring both the amount of HIV and the number of CD4 cells—the very cells that HIV latches onto.

Similarly, although viral loads are likely to remain undetectable as long as the meds are taken regularly, treatment regimens can fail. “I’ve had my virus break through the medications a number of times,” says Jim Pickett, director of prevention advocacy and gay men’s health at AIDS Foundation of Chicago, who’s been on meds since 1997 and considers himself very adherent. “And yet, when I became detectable I didn’t know until I was tested—you don’t just one day have a headache and then know you’re detectable. You don’t know.” Hence, testing for STIs and viral load are essential.

Treatment as prevention works really well as a strategy for individuals who meet all the requirements. (Think about it: If it weren’t for the single person in HPTN 052, who technically wasn’t on successful treatment yet, that trial would have reached 100 percent success.) As a population strategy, however, myriad challenges—including the cost of the meds—can sink the prevention potential.

Of the 1.1 million people with HIV in the United States, almost 20 percent are unaware of their status. What’s more, only between 60 and 68 percent are linked to care, between 30 and 41 percent remain in care, and a dismal 16 to 34 percent have suppressed viral loads. (This collection of diminishing numbers is often referred to as “the cascade data.”)

To fully realize TasP, HPTN’s Cohen says, “you have to go through the process of testing people, treating them—in my mind, treating them immediately—making sure they remain adherent and making sure that their viral load is suppressed. If you do all that, I suspect transmission will go down to an unbelievably low rate.”

And while TasP may be a pivotal step in reaching the goal of “an AIDS-free generation,” the opportunities for misuse also exist. Leading thinkers such as the Global Network of People Living With HIV/AIDS (GNP+) have raised concerns. For example, will those living with the virus be coerced into starting treatment? Will they always be informed of their options? Will testing remain voluntary and confidential?

“Providing treatment to people living with HIV infection to improve their health must always be the first priority,” notes the Centers for Disease Control and Prevention (CDC) in a January 2013 background brief on TasP. But such statements are expected when it’s understood that placing people on treatment for a public health purpose is a violation of human rights.

“[I’m] very concerned that the priorities have been skewed, in part by pharmaceutical companies seeking larger markets and in part by a political and public health environment looking for an easy way out,” says POZ founder and Sero Project executive director Sean Strub. “It’s like they want to buy a can of pharmaceutical Raid and spray it on everybody to stop the transmission of HIV. But that still leaves all the other circumstances that facilitate HIV’s spread unaddressed, as well as creates a host of new problems.”  We can ensure that people with HIV are making empowered decisions, Strub says, by measuring their treatment literacy once they start taking meds.

When to start treatment is another big question. HTPN 052 found a benefit to starting right away, and the U.S. Department of Health and Human Services recommends treatment for everyone, regardless of CD4 count. But others go by different benchmarks. The data for starting therapy when CD4 counts fall below 350 is stronger than that for starting above 350, says Tim Horn, the HIV project director at Treatment Action Group, and it’s even stronger than data for starting above 500—or regardless of CD4s. Nonetheless, Horn concludes: “All of that said, I simply can’t imagine that we’ll find that [starting early] is actually harming people living with HIV on a large scale.”

In 2010—a year before the HPTN 052 results—San Francisco became the first U.S. city to adopt a policy of universal ARV access. In other words, of offering treatment to everyone regardless of CD4 count, which many people view as TasP. The decision, according to Brad Hare, MD, the medical director of the HIV/AIDS Clinic at the San Francisco General Hospital, was based on their own real-world data and on-the-ground experiences as well as the input of community groups such as Project Inform and the state agency that oversees the AIDS Drug Assistance Program (ADAP).

The HIV clinic sees 3,000 patients; it’s a public health setting where none of the clients has private insurance and there are high rates of active substance abuse, homelessness and mental illness. “It’s a tough patient population,” Hare admits. So how’s the new policy panning out? “It’s working pretty well,” says Hare, explaining that 92 percent of clients are prescribed ARVs and of those, 82 percent have undetectable viral loads (this compares with the nationwide average of between 16 and 34 percent). Citywide, new infections are decreasing. In fact, looking at data from 2004 to 2011, researchers writing in the Journal of Acquired Immune Deficiency Syndromes recently concluded: “‘Treatment as Prevention’ may be occurring among [men who have sex with men] in San Francisco.”

However, Hare points out, the successes cannot be attributed solely to the city’s universal ARV policy. San Francisco has also invested in its testing and treating programs, and it offers a health benefits program to people with HIV. Also, MSM comprise 90 percent of the city’s HIV epidemic, and the local activist community remains informed and involved. “San Francisco is a unique place,” Hare says, “and [our policy] may not apply to others. But there are a lot of generalities we can learn. First of all: This can work.”

Hare has observed that his clients decide to start treatment for a variety of reasons. Some hope that the meds will help them maintain cardiovascular health. Others want to stave off mental decline. He recalls one patient who initially declined ARVs because his blood work was good but then changed his mind after two incidences of condom failure resulted in his negative partner taking HIV meds as post-exposure prophylaxis.

When speaking with his patients, Hare stresses that the evidence points to personal health benefits for starting treatment as soon as they’re ready. Then, as if it’s almost a “by the way” aside, he mentions the prevention benefits for their partners and the community. In fact, he says, “I don’t see our policy as written as a treatment as prevention policy. It is clearly based on the benefits of the individual [with HIV].” In other words, it’s treatment as treatment.