Teens having lots of sex on television is hardly a new phenomenon. What’s different about today’s prime-time bumping and grinding is there’s rarely talk of how to prevent sexually transmitted infections (STIs) or unwanted pregnancy. And condoms only make rare cameo appearances.

To prove our point, we watched some of today’s most salacious shows, rating them from 1 to 10 condoms on the POZ Safer Sex-O-Meter  (1 being the lowest). The verdict? There is precious little safer-sex savvy on today’s shows. Especially since many teens are deprived of comprehensive sex education in schools, we say that failing to inject these shows with a touch of lifesaving info is a missed opportunity.

Glee
Now that Artie has joined the football team, cheerleader Brittany decided to help him get over his former girlfriend by deflowering him. Glee has implied that Brittany knows her way around the locker room, and if she’s anything like her fellow cheerleader Quinn Fabray—the former president of the school’s celibacy club who got knocked up—we’re guessing she and Artie didn’t wrap it up. Clearly, McKinley High needs to enroll its students in some serious sex ed.
POZ SAFER SEX-O-METER RATING: 1

Gossip Girl
Within the show’s four seasons Upper-East-Side “it” girl Serena van der Woodsen has slept with at least eight men, and it’s been implied many others have spent time between her rumpled sheets. When a rumor ran rampant on campus that Serena contracted an STI, instead of getting tested to prove her critics wrong, she fought back with words and pouty looks. Newsflash Serena: The only way to know your status is to get tested. Despite missing this teaching moment, Gossip Girl gets bonus points for a recent episode in which Chuck pulled out a plethora of condoms to suggest he and Blair engage in nonstop sex romps to get over each other.
POZ SAFER SEX-O-METER: 390210
Dixon is caught with his pants down when his cradle-robbing ex-girlfriend Sasha returns and announces she is HIV positive. Though Dixon initially freaks out and breaks up with Ivy (his current girlfriend whom he hasn’t yet slept with), he is smart enough to get tested to find out his status. He ends up testing negative, but only time will tell if he practices safer sex next time he’s in the sack. Here’s hoping the kids from 90210 learn from each other’s mistakes.
POZ SAFER SEX-O-METER: 4The Secret Life of the American Teenager
Resident racy teen Adrian slept with Ben out of revenge in the front seat of her convertible. Though usually a safer-sex queen, Adrian forgot to take her birth control pills, and the condom broke. So despite her efforts she ended up with a bun in the oven. The good news is each episode of Secret Life ends with a PSA directing teens to resources if caught in similarly sticky situations. While we applaud the show’s efforts to teach kids what to do if accidents happen, we would like the whole series to serve as an ad for more self-empowered, premeditated safer sex.
POZ SAFER SEX-O-METER:  6 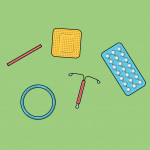 Women Living With HIV May Need Better Access to Contraception