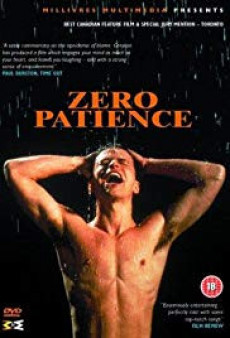 John Robinson stars as the remarkably well-preserved Burton and Normand Fauteux plays the ghost patient zero. The late Michael Callen (recently seen in the muy mainstream Hollywood bone to the AIDS community, Philadelphia) lends his many talents to the film along with Dianne Heatherington, Richardo Keens-Douglas, Bunny Behrens, Charlotte Boisjoli and Marla Lokofsky.

Not one to duck controversy, Zero Patience, clearly hypothesizes that HIV has never been scientifically proven to cause AIDS and thus no one truly knows what causes AIDS.