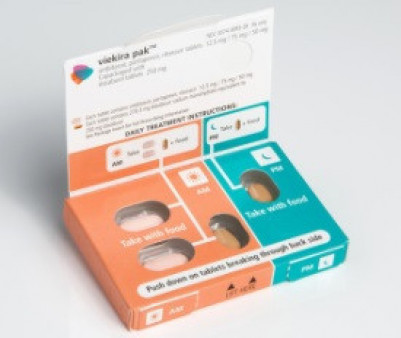 On December 19, the U.S. Food and Drug Administration (FDA) approved AbbVie’s hepatitis C virus (HCV) regimen Viekira Pak (ombitasvir/paritaprevir/ritonavir; dasabuvir) to treat genotype 1 of the virus, The Wall Street Journal reports. Formerly known as “3D” because it is composed of three different classes of direct-acting antivirals, the regimen is poised to compete with Gilead Sciences’ Harvoni (ledipasvir/sofosbuvir) as a highly effective means of curing hep C. Like Harvoni, Viekira Pak does not require the addition of interferon, which was long a mainstay of hep C treatment and which causes onerous, flu-like side effects.

People with genotype 1a, as well as those who have cirrhosis or have had a liver transplant, should take Viekira Pak with ribavirin. The regimen is not recommended for use by people with decompensated cirrhosis.

Viekira Pak should be taken for 12 weeks, although some people with genotype 1a who have cirrhosis are advised to take it for 24 weeks.

AbbVie has priced Viekira Pak at $83,319 for a 12-week regimen, which is only a hair under the $84,000 cost of Gilead’s blockbuster hep C drug Sovaldi (sofosbuvir), which was approved in December 2013 and has accrued more than $8.5 billion in sales since then. Meanwhile, Gilead’s new single-pill combination regimen Harvoni, approved in October 2014, has similar cure rates to Viekira Pak, but costs $94,500 for 12 weeks. The math may still work in Gilead’s favor in many cases, however, considering that an estimated half of people with genotype 1 of hep C can take Harvoni for just eight weeks, for a cost of $63,000.

In related news, a regulatory committee recommended that the European Medicines Agency (EMA) approve AbbVie’s hep C regimen for those with genotypes 1 and 4. That decision is expected in the first quarter of 2015.

“The new generation of therapeutics for hepatitis C virus is changing the treatment paradigm for Americans living with the disease,” Edward Cox, MD, MPH, director of the Office of Antimicrobial Products in the FDA’s Center for Drug Evaluation and Research, said in a press release. “We continue to see the development of new all-oral treatments with very high virologic response rates and improved safety profiles compared to some of the older interferon-based drug regimens.”

“We are proud of the work of our research and development organization to bring this important therapy, offering high cure rates, to patients with hepatitis C. We believe appropriate patients, regardless of their fibrosis stage, should have broad market access to Viekira Pak, and we are committed to supporting access to this therapy,” Richard Gonzalez, chairman of the board and CEO at AbbVie, said in a press release. “This is the first of several potential new therapies that we are advancing to treat a multitude of serious disease states, and we anticipate bringing them to market in the coming years.”

The FDA’s approval is based on six Phase III studies of Viekira Pak in more than 2,300 people in 25 countries. The studies found that the regimen boasts a cure rate of 95 to 100 percent among genotypes 1a and 1b, including those who had failed treatments before and those who were new to hep C therapy, and also those with compensated cirrhosis.

In addition, the approval is based on Phase II trials that cured 97 percent of participants with liver transplants and 92 percent of those coinfected with HCV and HIV.

AbbVie has established a patient assistance program to provide Viekira Pak at no cost to those who cannot afford it. The company also has a copay assistance program for those with commercial insurance that can lower out-of-pocket costs to as little as $5 per month. The development of a patient support program is also underway, meant to help with various ancillary needs on the part of people seeking treatment for hep C. Click here to access the web site for that program or call 844-2-PROCEED (844-277-6233).

To read a press release from the FDA, click here.