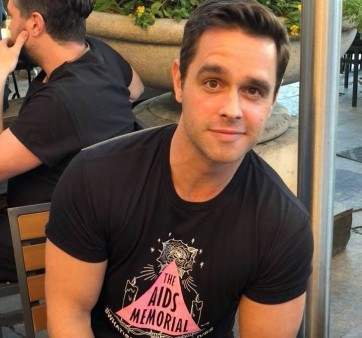 Here’s how the world responds to Karl Schmid.

UPDATE: It turns out that Karl Schmid first posted his HIV story on the @theaidsmemorial Instagram account (more about that archive below). If you’d like to rock one of the AIDS Memorial T-shirts Schmid is wearing, they are available for $30 on Adam’s Nest here, with 25 percent of the price going to support New York–based Housing Works, which fights the dual epidemics of homelessness and HIV.

After struggling for nearly a decade over whether to disclose his HIV status, ABC TV correspondent Karl Schmid posted a heartfelt message on Facebook for the world to see. It began: “Hi. I’m a 37 year old HIV+ man who has been poz for almost ten years.”

The result? More than 6,700 likes and 560 shares as of Monday morning. The overwhelming majority expressed unbridled support from across the globe, and many commenters also revealed their own HIV stories.

“I’ve had AIDS for almost as long as you’ve been alive,” wrote Arthur Shafer, “[I’ve] been married for the last 10 years, and have never been happier.”

“You are very brave…and stronger than you even know,” added Courtney Romeo. “I wish you nothing but good health and happiness.”

Today has been insanely overwhelming. I had NO idea that me sharing something would have such an impact. For those of you who dm’d with your stories THANK YOU. Tonight, I’m hanging out with my best friend and enjoying the talent that is @taylormacnyc in DTLA pic.twitter.com/6X07KVsOaN

Two days after his Facebook post, the Los Angeles–based Schmid took to social media again. “Today has been insanely overwhelming,” he wrote in the tweet above. “I had NO idea that me sharing something would have such an impact. For those of you who dm’d with your stories THANK YOU.”

No doubt, the positive response was in part due to the heartfelt way in which Schmid expressed his feelings. The complete text of his Facebook post reads:

Hi. I’m a 37 year old HIV+ man who has been poz for almost ten years. I work in television. And on the side of the camera where, for better or worse it’s considered “taboo” for people “like me” to be “like me”. For 10 years I’ve struggled with “do I or don’t I”? For ten years the stigma and industry professionals have said, “don’t! It’ll ruin you”.

But here’s the thing. I’m me. I’m just like you. I have a big heart and I want to be loved and accepted. I may be on TV from time to time, but at the end of the day I’m just an average guy who wants want we all want. To be accepted and loved by our friends and family and to be encouraged by our peers.

So here’s what I say, stand tall, and stand proud. You can’t make everybody happy but you can make you happy. And so long as you tell the truth, you will never have to remember anything. Labels are things that come and go but your dignity and who you are is what defines you. I know who I am, I know what I stand for and while in the past I may not have always had clarity, I do now. Love me or hate me, that’s up to you. But, for anyone who has ever doubted themselves because of those scary three letters and one symbol, let me tell you this, you are somebody who matters. Your feelings, your thoughts, your emotions count. And don’t let anybody tell you otherwise. I’m Karl Schmid, and I’m an HIV-positive man! #whatisrememberedlives @theaidsmemorial @theaidsmemorialtshirt

By the way, the T-shirt he’s wearing in the Facebook post promotes @theaidsmemorial, a digital archive on Instagram dedicated to remembering those lost to AIDS. You can read POZ blog posts from Stuart @theaidsmemorial here.

As a correspondent for ABC, Schmid has covered the Academy Awards and other Hollywood events. You can watch a reel of his work below: