The executive director of AVAC, a global advocacy group for biomedical HIV prevention, outlines five major priorities for action in 2013. 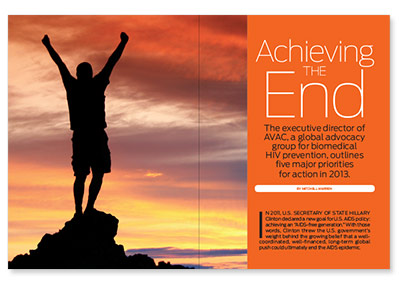 In 2011, U.S. Secretary of State Hillary Clinton declared a new goal for U.S. AIDS policy: achieving an “AIDS-free generation.” With those words, Clinton threw the U.S. government’s weight behind the growing belief that a well-coordinated, well-financed, long-term global push could ultimately end the AIDS epidemic.

What exactly does the phrase “ending the epidemic” mean? It’s a key question—and one that advocates are paying keen attention to, as big promises proliferate. At AVAC, we define this as a goal of dramatically curbing, and eventually ending, new infections and AIDS-related deaths through robust prevention and treatment programs. This can only happen through the leadership and activism of people living with HIV worldwide and their allies.

At first glance this goal may sound out of reach. But it’s not just wishful thinking. It’s the result of a steady stream of HIV prevention advances—including voluntary medical male circumcision (VMMC), HIV “treatment as prevention,” recognition of the need to target prevention to key populations, and of newer scientific progress related to pre-exposure prophylaxis (PrEP). Together, these strategies, along with an effective AIDS vaccine and a microbicide, have the potential to transform our ability to fight the epidemic. There’s been progress on every front in recent years. Our optimism that the goal can be reached is warranted.

Another reason for optimism: Hillary Clinton recently made good on her commitment when she announced a new “blueprint” for the President’s Emergency Plan for AIDS Relief (PEPFAR), the U.S. government’s global AIDS initiative. The document is an ambitious proposal for a new phase of the global AIDS response—one in which beginning to end the AIDS epidemic is no longer a question of scientific possibility, but of determination, coordination, funding and political will.

AVAC focuses on advocacy for HIV prevention—we were founded in 1995 as the AIDS Vaccine Advocacy Coalition, but we’ve broadened our scope to include a range of biomedical HIV prevention research—and while we’re encouraged by the broad consensus that this epidemic can end, we see a narrow window of opportunity to set the world on the right pace. In fact, that window is already closing as a result of insufficient global leadership and action.

A recent report from the Joint United Nations Programme on HIV/AIDS (UNAIDS) illustrates what is at stake. While a record 1.4 million people started HIV treatment in 2011, that is still far fewer than the 2.5 million people who were newly infected with HIV that year.

To begin to end AIDS, we must have clear milestones for tracking progress. The PEPFAR blueprint will only be as valuable as the country-level plans that define its ambitious targets. Whether in PEPFAR countries internationally or here at home in the United States, advocates must act now to ensure that we are engaged in the country planning processes—and that the resulting documents are ambitious, innovative and matched by government commitments. In the United States, especially, strong political support from the Obama administration and Congress is essential—and neither group can be assumed to be on board.

We need other milestones, too. One key goal is to reach a tipping point at which, for the first time, more people gain access to HIV treatment each year than become newly infected. A recent analysis by AVAC and amfAR, The Foundation for AIDS Research, suggested that with aggressive action on both prevention and treatment we could reach that tipping point by 2015.

Reaching this tipping point involves scale-up of a whole range of prevention strategies—including, but not limited to, expanded access to antiretroviral (ARV) treatment for HIV-positive people. Everyone with CD4 cell counts of 350 or below should have access to effective ARVs delivered through programs that support adherence over the long term. ARVs should at minimum also be available to key populations, such as pregnant women and HIV-positive partners in serodiscordant relationships—i.e., couples where one partner is HIV positive and one is HIV negative—regardless of CD4 cell count.

Expanded access to ARVs is just one part of the solution. The recent UNAIDS data show that in some countries and sometimes entire regions, there isn’t enough access to critical prevention tools like male circumcision, services to prevent mother-to-child transmission and even HIV testing, counseling and condoms.

And while AIDS does not discriminate, too often the AIDS response does. Prevention programs and policies in much of the world either still ignore sex workers, gay and bisexual men and people who inject drugs, or criminalize their lives.

So what, exactly, needs to happen next?

Setting the right pace today is critical. The speed with which we implement advances in HIV prevention and treatment over the next 12 to 24 months will determine whether, and how quickly, we can control—and ultimately stop—this epidemic.

This past World AIDS Day, December 1, AVAC issued a report, Achieving the End: One Year and Counting, that identifies five major priorities for action in 2013. (Go to avac.org to download the complete report.)

These are by no means the only things that must be done, but whether we’re on track in a year’s time will depend in large part on our success in these areas. Our top-five list is as follows:

1. End confusion about “combination prevention.”
HIV prevention is not a one-size- fits-all proposition. Experts widely support a combination prevention approach, in which people at risk for HIV have access to a package of HIV prevention tools that vary based on who they are and what puts them at risk for HIV. Over the last year, there has been a long-overdue acceptance of this concept throughout the global AIDS community. But the hard work of defining the right combinations and establishing priorities has not been done.

In 2013, donors, policy makers and civil society need to be held accountable for choosing, implementing and evaluating the right packages of interventions for specific circumstances. Prioritizing prevention programs that are politically popular but don’t work is not acceptable. Neither is discrimination against groups of people at risk. Prevention efforts that overlook men who have sex with men (MSM), injection drug users or sex workers, for example, will not bring us closer to the end of AIDS.

2. Close the gaps in the HIV “treatment cascade.”
Antiretroviral treatment does more than improve and prolong the lives of those infected. It is also one the most powerful HIV prevention strategies available, reducing the risk that an infected person will pass on HIV by up to 96 percent among monogamous heterosexuals. But only a small proportion of people diagnosed with HIV are linked to ARV treatment, and an even smaller share—hence the “cascading” effect to ever tinier populations—stay on treatment and have their HIV infection suppressed to levels low enough to prevent transmission to others.

A range of studies is looking at ways to narrow this gap, but these efforts are uncoordinated and incomplete. In 2013, researchers and funders need to convene and establish a clear research and implementation agenda to close the gaps in the treatment cascade.

3. Prepare for new nonsurgical approaches to male circumcision.
The World Health Organization (WHO) is expected to approve new male circumcision devices that could eliminate the need for surgery, speed recovery and lower costs. This promises to be a major boon to key African countries, where HIV infections could be reduced by up to 20 percent if high circumcision rates are achieved.

But health leaders are moving too slowly in their preparations for the new devices. If they don’t pick up the pace, we could see months or years of missed opportunities to reduce infections, and more lives unnecessarily lost. Though the new devices may not be right in every country and setting, funders and national program planners need to act now to evaluate their potential role and plan for roll-out.

4. Learn how to turn PrEP research results into real-world programs.
With PrEP, uninfected people take a daily HIV treatment medication to reduce their risk of becoming infected. In July 2012, the U.S. Food and Drug Administration approved PrEP using the drugs tenofovir and emtricitabine (sold together as Truvada) for gay and bisexual men and heterosexuals in the United States. But there is a lot we still don’t know about how best to implement PrEP in the field. To get the right answers, we need a suite of real-world “demonstration projects” in different places and different groups of people at risk.

Global health agencies including WHO and UNAIDS are awaiting the results of these studies before they issue urgently needed guidance on PrEP. The problem is, few such studies are under way, and there is no clarity on what range of studies is even needed. In 2013, WHO, UNAIDS and the research community need to work together to define and launch a core package of these studies that can lead to international guidance.

5. Protect vital HIV prevention research funding.
Research into HIV vaccines, microbicides and other new HIV prevention tools and a cure has entered its most productive period in years—just as medical research budgets are drying up around the world. Federal budget cuts in the United States and elsewhere could slow or halt progress on the tools we need to ultimately end this epidemic.

Policy makers and advocates must band together to preserve critical HIV research. In the United States, Congress must act to sustain funding through the National Institutes of Health, while European countries must bolster their commitments. Low- and middle-income countries also have vital roles to play, both as partners in research and, increasingly, as funders in their own right.

Ending an epidemic of this size and scope is a massive undertaking that will require careful planning, global coordination, transparency and long-term commitment to push ahead through the ups and downs that lie ahead. But the opportunity to end this epidemic is here, and it will not last. Now is the time to act on a clear plan of action that will help make AIDS a part of history.