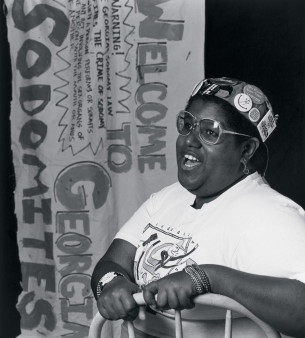 Want to learn more about historic AIDS activist group ACT UP? You’re in luck. This primer will educate, inspire and even entertain!

This archive includes 187 interviews with members of ACT UP New York.

Bill Bytsura’s stunning collection of 60 black-and-white portraits of activists from various cities includes statements from each. For our interview with Bytsura, see “Portrait of an Activist.”

This 2017 French film by Robin Campillo offers a based-on-real-life tale of AIDS activism in 1992 Paris. For our interview with Campillo, see “Hit That Perfect Beat.”

“How to Survive a Plague”

The 2012 documentary and 2016 book by journalist David France follow activists’ push for the development of  effective HIV treatment. Watch a POZ on Location interview with France.

Sarah Schulman’s 2021 book reassesses the common narratives around this famed coalition. She talks with POZ about the book in “For the Record.”

Never Silent: ACT UP and My Life in Activism

The iconic, irascible cofounder of ACT UP is the subject of Jean Carlomusto’s 2015 HBO documentary. Read our interview

with Carlomusto titled “Behind the Lens.”

“United in Anger: A History of ACT UP”

United in Anger: A History of ACT UP