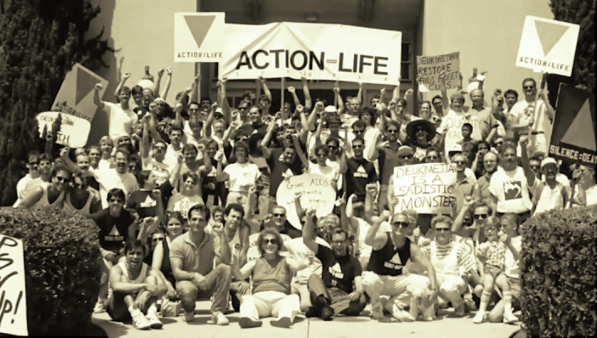 The digital project will document the AIDS activism of ACT UP Los Angeles from 1987 to 1997. Several items are already posted online.

Five original members of the AIDS activist group ACT UP Los Angeles have launched an oral history project to preserve its history from 1987 to 1997. The AIDS history project will include recorded personal accounts by current and former members, some of which are already posted on ACTUPLA.org. The site also hosts a video (which you can watch above or on YouTube) and a gallery of images of Los Angeles protests and memorabilia related to local HIV/AIDS advocacy.

The ACT UP LA Oral History Project is expected to take two to three years to complete and will include over 100 interviews. Work began last year, according to a press release, and was inspired in part by the COVID-19 pandemic and its similarities with AIDS. What’s more, several original members of ACT UP Los Angeles had died without preserving a record of memories.

“Not only were voices silenced by AIDS, but we are now continually at risk of losing the stories of the people who championed their fight—some with HIV/AIDS, some without —but all people who put their lives and freedom on the line to address this loss,” said Oral History Project member Nancy MacNeil in the press release. “We need to ensure the stories get told by the voices that lived them. Everyone has the right to be the author of their own history. To paraphrase poet Dylan Thomas: ‘Let those that raged hard have their moment in the light, they did not go gently into the night.’”

A statement of purpose, posted on the ACT UP Los Angeles website, reads in part:

Our intent with the ACT UP Los Angeles Oral History Project is to capture the experiences of those individuals whose participation in ACT UP Los Angeles led to successes in the community that saved lives, changed the way society thought about people with AIDS and challenged and changed the institutional biases that allowed the AIDS crisis to explode to such a devastating level. Along the way ACT UP Los Angeles members helped erode homophobia, helped create a lesbian and gay political base, joined together across communities in coalition to preserve women’s access to family planning, worked with labor groups, fought religious bigots and worked to ensure accurate HIV education throughout the L.A. Unified School District. These stories and the reverberations of our movement must be recorded or the echoes will be lost to history.

As alumni of ACT UP LA, we are an aging community. Many of us are long-term survivors of HIV/AIDS, some are sick and some are not. Additionally, many of us are confronted with the various challenges of aging. We were particularly motivated by recent losses of ACT UP LA members such as Cat Walker who was present at the first meeting in 1987. Let’s capture our personal stories before it’s too late.

If you were a member of ACT UP LA, why do we want your story? On the surface we worked as a collective organization. But we also worked individually and have personal stories to share. In such a vast organization with a large number of members often being sick, pulled in multiple directions by work, committees and personal obligations, we may not have heard about many of the stories that people experienced, and history needs to know the enormity of the times. We need to appreciate these histories because at the time we had the chaos of very sick people working in a non-stop crisis in an endless state of fear and grieving. On a broader level, there are people who want to hear our experiences: a new generation of historians, educators, students, public policy makers, artists, family members and more.

Inspired by a speech by Larry Kramer, ACT UP—which stands for AIDS Coalition to Unleash Power—was born in New York City in 1987. Chapters soon formed in numerous cities; each one operated independently, and many remain active today. The media-savvy groups became famous for their attention-grabbing protests, their visual flair and, ultimately, their success in championing the advent of effective HIV treatment in 1996. To learn more, read about the documentary How to Survive a Plague.

“ACT UP Los Angeles was one of the earliest chapters and differed from those in many of the other cities around the world,” explains the press release from the history project. “Notable differences include its intense focus not only on the provision of a dedicated public AIDS ward which L.A County was notorious for lacking, but also exceptional were ACT UP/LA’s focus on women’s and prisoners’ lives. ACT UP/LA marched on federal buildings, state buildings, LA County and City government offices, insurance companies, hospitals, churches, prisons, political fundraisers, the movie and television industries, homes of bigots and traveled out of town to protest in Congress, the pharmaceutical industry, the insurance industry, the [Centers for Disease Control and Prevention, the Food and Drug Administration, the National Institutes of Health], international AIDS conferences, and presidential campaigns and conventions.… In the 10 years of the group’s activism, the ACT UP Los Angeles slogan ‘Action = Life’ was put into constant practice.”

Their slogan complements the “Silence = Death” symbol created in 1986 by an art collective in New York City. That visual message became synonymous with AIDS activism around the same time ACT UP chapters launched across the globe.

To learn more about the history and current actions of various chapters of the activist groups, click the POZ hashtag  #ACT UP. Here’s a sampling of what you’ll find:

Editor’s note: This article originally stated that three ACT UP members are organizing the history project. The correct number is five.