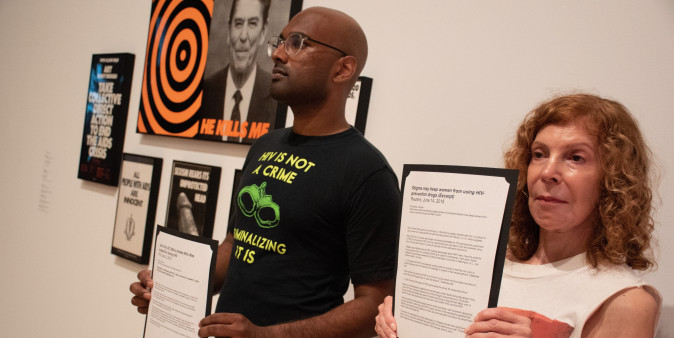 ACT UP NY members protest at the Whitney Museum of American Art in New York City. Courtesy of ACT UP NY/Michelle Wild

Their first goal was to point out that the Whitney Museum “does not make explicit connections to the present AIDS crisis within the exhibition.”

The protesters targeted History Keeps Me Awake at Night, which features art by David Wojnarowicz, a former member of ACT UP who died of AIDS complications, and An Incomplete History of Protest, which features protest art from the 1940s to the present, including a room devoted to HIV/AIDS-themed videos, posters, artworks and more.

Wojnarowicz’s art spans the mediums of painting, photography, film, sculpture and more. The Whitney describes him as a “queer” artist whose true subject was “the outsider.” He often created haunting self-portraits and directly addressed the AIDS epidemic. He was also an active member of ACT UP NY. According to the group’s website, he could often be seen wearing a jacket bearing the message “IF I DIE OF AIDS—FORGET BURIAL—JUST DROP MY BODY ON THE STEPS OF THE F.D.A.”

Current members of the New York chapter of ACT UP (AIDS Coalition to Unleash Power) gathered at the Whitney to protest the exhibition’s failure to connect the show to the modern HIV/AIDS crisis; in other words, it historicizes activism that is ongoing. Here’s how ACT UP describes this problem:

Historicization reinforces distance, a sense of “This is history; this doesn’t affect me,” and therefore does a disservice to present activism: People who think AIDS is over won’t see any reason to donate money to AIDS-related causes, to take the most obvious example. They also won’t see any reason to tell their friends about PrEP and U=U, to take a less obvious one.

When arts institutions do not connect historical activism to the present activism being done on the same issue, they are missing an opportunity to reach an interested and sympathetic audience who might then become activists themselves, or who might at least be inspired to read up on the state of the world. They are also keeping relevant information from their patrons, many of whom are upset when they discover they’re only getting half the story.

Another goal of the protest was “to draw attention to lack of education and funding for the current HIV/AIDS crisis, both in the U.S. and abroad. Just as the AIDS crisis of the ’80s was exacerbated by governmental neglect and public ignorance, neglect and ignorance are arguably the biggest obstacles to ending AIDS now that we have the tools to do so.”

At the protest, spearheaded by ACT UP NY members Ariel Friedlander and Annie Fureigh, according to an article from HyperAllergic.com, activists stood next to specific artworks and held up contemporary news articles about HIV; the articles were designed to look like plaques that hang next to artwork.

The Whitney released a statement to HyperAllergic.com. It reads in part:

We completely agree that the AIDS crisis is not history. Part of our mission in mounting this exhibition is to make sure the history of the AIDS crisis figures centrally in American (and international) history so that it might inform present and future action. We have made an effort to frame AIDS as a current and ongoing crisis in a number of programs.… Our educators and docents speak about the ongoing AIDS pandemic in tours in the galleries. We have a series of scheduled programs on Saturday afternoons throughout the exhibition that address “Queer Art and Activism.” Perhaps our position is expressed most clearly in the following wall text that is part of our exhibition An Incomplete History of Protest: … “As we continue to live with such loss, and AIDS still affects individuals and communities in the United States and globally, the rallying cry of ACT UP (AIDS Coalition to Unleash Power) resounds today: the AIDS crisis is not over.”

According to ACT UP NY, the protest had the desired effect, and many museumgoers were engaged in conversations sparked by the news articles. Perhaps most important, however, the website’s statement warns against forgetting the second goal of the protest: the need for public support in the fight to end HIV/AIDS.

“Most of ACT UP’s actions are fundamentally about what has been described as ‘dangerous complacency’ by numerous HIV experts,” the statement says. “We use instances of complicity to call attention to the complicity of society in general. Any article about this action that does not primarily focus on how serious the HIV crisis continues to be, however well-intentioned, reproduces the Whitney’s error in judgment.” 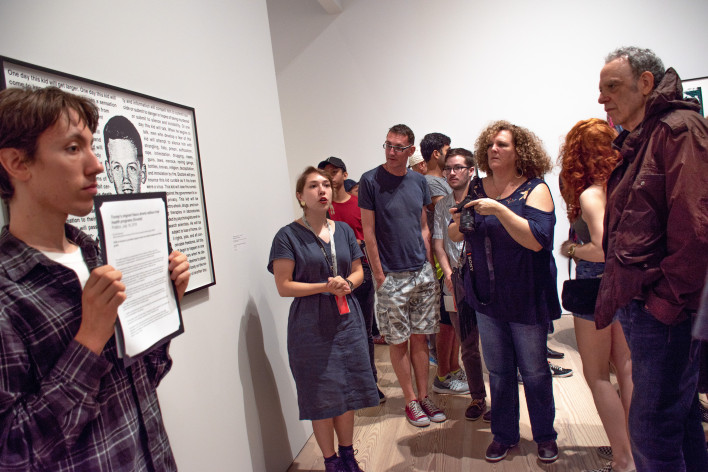 ACT UP NY members protest at the Whitney Museum of American Art in New York City.Courtesy of ACT UP NY/Michelle Wild

For a related article in POZ, read “AIDS Art in America That’s Youthful, Even Joyous [SLIDESHOW].” 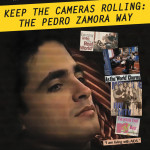