Advocates Call for Increased Investment to End the AIDS Epidemic

In New York State, new HIV rates are at a record low, but more needs to be done to end the epidemic by 2020. 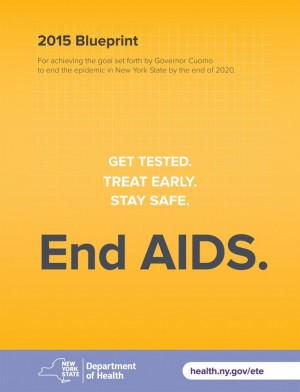 New York, once the epicenter of the AIDS epidemic, has established itself as a national leader in efforts to end HIV/AIDS as an epidemic. Since the EtE Blueprint was launched in 2014, the number of new HIV infections has dropped dramatically from 2,497 in 2014 to 2,115 in 2016, the latest year for which data is available. While this improvement is encouraging, increased investment is needed in communities most impacted by HIV/AIDS to reach the goal of 1,750 new infections in 2017 and cross the finish line to the ultimate goal of fewer than 750 by 2020.

Of particular concern is that certain communities — women, transgender and gender non-conforming individuals, people of color, and individuals living in areas of New York State outside of New York City — are seeing less progress in reduced HIV infections. These challenges are not unique to New York, but New York’s EtE Blueprint will chart a path forward for other states.

In order to end AIDS as an epidemic, New York must expand access to rental assistance for individuals living with HIV outside of New York City, protect Medicaid in the face of federal cuts, and maintain EtE funding commitments to address health disparities and ensure all communities have access to HIV treatment and prevention, including pre-exposure prophylaxis (PrEP).

“While the financial challenges the state is facing are real, investing in the end of HIV/AIDS is both the right and smart thing to do to save lives and dollars. If we don’t address the crisis in the communities at greatest risk of infection, the outlook is grim, and we’ll pay a very high price in the long-run. Preventing each new HIV infection saves an estimated $500,000 in lifetime medical costs, which are largely borne by Medicaid and Ryan White funding nationwide,” said Doug Wirth, president and CEO of Amida Care.

Significant disparities in access to prevention and treatment persist. If current diagnosis rates continue, half of gay Black men and a quarter of gay Latino men will be diagnosed with HIV in their lifetime. In New York, new diagnoses among non-Hispanic blacks and Hispanics are 7.6 and 5.1 times higher respectively than the rate for non-Hispanic whites. Transgender women are 49 times more likely to be living with HIV compared to the general population.

“We’ve made tremendous accomplishments in advancing prevention, treatment, and care in the fight to end AIDS, but we need to double-down in our efforts for the black community if we are to reach the goal of ending the epidemic in New York. Women of color and young men who have sex with men (MSM) of color continue to bear a disproportionate burden of the HIV epidemic. We need increased programming and research that move us toward health equity,” said C. Virginia Fields, president and CEO of the National Black Leadership Commission on AIDS.

“Moving forward to End the Epidemic must address the barriers to health care the Latinx community faces, including stigma, discrimination, language barriers, and in some cases, poverty, unemployment, and addiction. We must invest in communities of color, who represent those most severely impacted by the HIV epidemic,” said Guillermo Chacón, president of the Latino Commission on AIDS.

In the 57 counties outside of New York City, HIV diagnoses dropped less than one percent from 2015-2016, while New York City diagnoses dropped 11 percent during the same time frame. An estimated 3,700 New Yorkers living with HIV who reside outside of New York City are homeless or do not live in a stable housing environment. This poses a formidable barrier to retaining them in care and providing access to HIV treatment that leads to viral suppression. Viral suppression is key to prevent new HIV infections, since a person living with HIV who has an undetectable viral load cannot transmit the virus to others: “Undetectable equals Untransmittable” (U=U).

“Access to stable housing remains one of the greatest unmet needs for individuals living with HIV/AIDS — at least 50 percent of whom experience homelessness or housing instability,” said Charles King, president and CEO of Housing Works. “Housing is health care. Data accumulated over the past three decades of experience and research shows unquestionably that housing status is among the strongest predictors of achieving successful HIV outcomes. So increased funding and accessibility to rental assistance programs outside of New York City is a crucial component of improving the health of individuals living with HIV/AIDS in this state.”

In addition to stable housing, Medicaid remains essential to meet EtE goals. Medicaid is the backbone of health coverage for more than 74 million Americans. In New York State alone, Medicaid provides coverage for more than five million people, and it is the single largest source of coverage for people living with HIV. Medicaid links people living with HIV to the health services they need to stay well. Without regular comprehensive care, people with chronic conditions have no choice but to visit the emergency room more frequently, are hospitalized more often, and rack up higher medical bills. All of these costs are ultimately passed on to the government, insurers, and taxpayers.

People in Southern states, who account for more than half of new HIV diagnoses while making up 38 percent of the national population, as well as populations that are most at risk for contracting HIV — women of color, young MSM of color, and transgender individuals — need better access to preventative methods such as PrEP, a treatment regimen that reduces the risk of contracting HIV by more than 90 percent. It is estimated that PrEP would be appropriate for about 1.2 million people in the U.S., but there are only about 145,000 active prescriptions for HIV prevention use. New York City community-based Sexual Health Clinics have demonstrated success in reaching at-risk communities:  60 percent of new PrEP users in 2016 were people of color.

However, in New York State, according to the EtE Dashboard, although PrEP use among Medicaid recipients increased by 20 percent, 82 percent of new PrEP users were male, and 37 percent were white. By preventing new HIV infections, PrEP not only enables people to live healthier lives, it also prevents hundreds of thousands of dollars spent to treat each individual living with HIV. While it costs about $55,000 over five years for one patient to be on PrEP, it costs nearly 10 times that amount for a lifetime of HIV treatment. Medicaid Managed Care health plans such as Amida Care can play a critical role in offering care coordination and supportive services to help at-risk communities overcome barriers to treatment and prevention. Amida Care ensures that care is tailored to individual needs and connects members to housing, transportation, job training, and other supportive services.

“PrEP is not reaching the communities that need it most, and that needs to change,” Wirth added. “What we need now are public-private partnerships to collaborate on investments in innovative programs that expand access to PrEP. Making PrEP widely available as a tool to stay healthy and safe is essential to end HIV/AIDS once and for all.”

Amida Care Inc. is a not-for-profit health plan that specializes in providing comprehensive health coverage and coordinated care to New Yorkers with chronic conditions, including HIV and behavioral health disorders, and people who are homeless or of transgender experience (regardless of HIV status).

This article was originally published by Amida Care.