A new report outlines six pillars of work vital to achieving this goal.

On the eve of World AIDS Day, HIV advocates have come together to urge the U.S. government to officially declare a goal of ending the epidemic domestically by 2025. A new report titled Ending the HIV Epidemic in the United States: A Roadmap for Federal Action highlights the steps necessary to achieve such a plan.

“The more than 1.2 million people living with HIV in the U.S. reside in every congressional district, state and territory,” said Jesse Milan Jr., president and CEO of AIDS United, in a press release.

“However, new cases of HIV and HIV-related deaths have become increasingly concentrated in communities of color, LGBTQ populations and Southern states. While some individual communities have already begun taking concrete steps to end their state and local epidemics, ending the national HIV epidemic requires a coordinated federal response.” 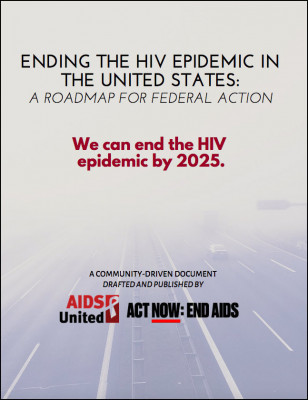 The “Ending the HIV Epidemic in the United States” report can be downloaded for free.Courtesy of AIDS United and Act Now: End AIDS

Developed by the Act Now: End AIDS coalition in conjunction with AIDS United, the report includes pillars of work that will provide the guidance necessary to significantly reduce new HIV cases, boost the life span and quality of life of people living with the virus and effectively address the related opioid, viral hepatitis, sexually transmitted infections and tuberculous syndemics, which will in turn greatly reduce overall cost in lives and health care dollars.

Each pillar also includes recommendations for action such as increasing funding for the Ryan White Program, expanding routine HIV testing for all Americans and making sustained multiyear increases for HIV/AIDS biomedical research.

“The resilience, wisdom and agency of affected communities must guide the implementation of any national plan to end the HIV epidemic in the U.S,” said Dazon Dixon Diallo, founder and president of SisterLove, Inc. and cochair of Act Now: End AIDS. “This road map was developed by people working in and from these very communities.”

As Dixon Diallo notes, “We have firsthand experience implementing similar strategies locally and as such, have unique expertise. This document has coalesced the larger HIV community behind one plan and one big, audacious goal. The federal government would be wise to tap into that energy. Together, we might just make history.”