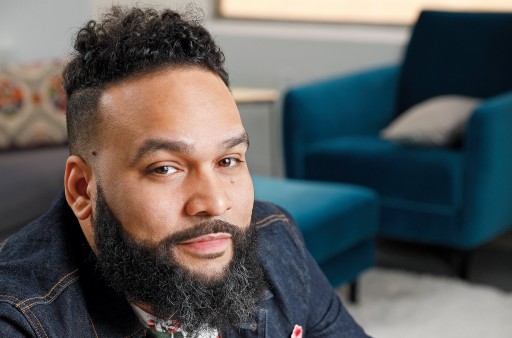 Louie Ortiz-Fonseca works for the health of LGBT youth.

Louie Ortiz-Fonseca says he always knew he was gay. Lucky for him, his mom’s circle of friends included drag queens, trans women and gay men. Growing up around these marginalized groups helped affirm his identity and inspired him to become an LGBT advocate.

“I was always drawn to any gay representation on TV,” explains Ortiz-Fonseca. “I remember AIDS being at its peak during that time.”

The epidemic had also struck close to home. When Ortiz-Fonseca was a teenager in the early ’90s, his father was diagnosed with AIDS and died of related complications in 1996.

As an adolescent, Ortiz-Fonseca worked as a peer youth advocate at the Gay and Lesbian Latino AIDS Education Initiative (GALAEI) in Philadelphia, where he grew up.

“We would come up with workshops and presentations around HIV prevention and HIV 101,” he recalls. “We went into classrooms and after-school programs to talk about HIV with other young people.”

In 2014, after many years of advocacy work, he cofounded The Gran Varones (“The Great Men”). The storytelling project highlights the narratives of queer and trans Latino and Afro-Latino men and bois, including those living with HIV.

“At least once a week, we get someone reaching out who has just been diagnosed and is looking for referrals or places they can go to continue their care,” he says. “That’s because of the stories they’ve read about other varónes.”

Ortiz-Fonseca is currently the director of LGBTQ health and rights at Advocates for Youth, the Washington, DC–based nonprofit that’s the leading force behind National Youth HIV & AIDS Awareness Day (NYHAAD) observed on April 10.

He works closely with three school districts across the country to create supportive environments for young Black and Latino men who have sex with men (MSM) in the hope that they will remain in school and access health resource centers.

“If they begin to engage in their health care more intentionally, we can decrease HIV infections and increase treatment,” he explains.

“Young people are always listening and watching,” Ortiz-Fonseca says. “It’s important that we as adults be clear and intentional about the messages we are putting out.”