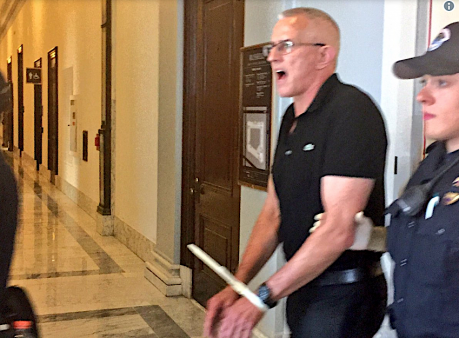 AIDS Activists Among #KillRepeal Protests and Arrests in DC [VIDEO]

Hundreds of people with preexisting conditions occupy all GOP Senate offices in efforts to save health care.

Republican Senators recently failed in their efforts to repeal and replace the nation’s current health care plan, but AIDS activists say the battle is not over. So they joined hundreds of health care workers, advocates and other people with preexisting conditions as they occupied the offices of all Republican U.S. senators to send them the message to “Kill the Bill,” “Kill Repeal” and “Protect Our Care.”

The massive manifestation of civil disobedience was held Wednesday afternoon, July 19, following a town hall meeting about health care held at St. Mark’s Episcopal Church in Washington, DC. As images and videos of the actions were shared on social media, it was reported that arrests were being made. On July 10, about 80 people were arrested while protesting the Senate health care bill in DC.

The July 19 action was led by the Center for Popular Democracy (CPD), Housing Works, GMHC, National Nurses United, Rise and Resist, Positive Women’s Network–USA and Health Care for America Now (HCAN; CPD is a member of the HCAN coalition).

The protests took place just days after the GOP Senate’s health care bill, called the Better Care Reconciliation Act (BRCA), failed to earn enough support to come up for a vote. But Senate Majority Leader Mitch McConnell of Kentucky said in a July 19 press conference, “What I want to disabuse any of you of is the notion that we will not have that vote next week. We’re going to vote on the motion to proceed to the bill next week.”

cops outside @SenatorBurr’s office ready to arrest this HIV+ man whose mom died of AIDS when he was ten years old #killthebill pic.twitter.com/tvZAKhkmrG

In a press release about the July 19 protests, Charles King, CEO and cofounder of Housing Works, said: “We’ve had some victories these past days in pushing back the various nefarious versions of the Senate bill and repeal-only attempts. We’re here in D.C. because we know the fight is not yet over. We are here to reiterate to every Republican Senator that they cannot repeal ACA and gut Medicaid. They need to shore up failing markets and put money into lowering premiums for middle-class, working people. They need to encourage all states to expand Medicaid, and they should extend Medicare to cover everyone 55 years old and over. Then we can fight for the single-payer health care system all Americans deserve.”

“I’ve been living with HIV for 26 years, and I am alive because of my medication,” added Barb Cardell of Boulder, Colorado, who was arrested on July 10. “Without my medications, I would die, and without my health insurance, I can’t afford my meds, which cost $10,000 per month. I remember the early days of HIV when people got sick and just died. I have tried to speak with Senator Gardner about this many times and wasn’t able to reach him in Colorado, so I’ve come back today to try to find him myself.”

For more about Senate Republicans’ latest health care bill, including how it guts Medicaid and allows insurers to deny coverage to people with preexisting conditions, click here, and to read about Republican senators’ latest “repeal and delay” efforts, click here.