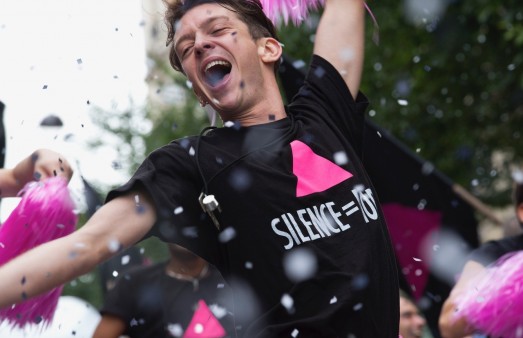 The director and stars also discuss how ACT UP Paris differed from U.S. activism and what young viewers find exciting about the movie.

Released in France, where it won the Grand Jury Prize at Cannes Film Festival earlier this year, the film BPM (Beats Per Minute) follows ACT UP Paris in 1992. France recently chose the movie as its official selection for the foreign language film category in the upcoming U.S. Academy Awards. And now, it’s finally arriving stateside in theaters. POZ spoke with Robin Campillo, the movie’s director and cowriter, who was a member of the AIDS activist group, and two of the film’s stars, Nahuel Pérez Biscayart (who plays Sean, an HIV-positive activist) and Arnaud Valois (Nathan, Sean’s HIV-negative lover of sorts). For more about the film, including links to screenings, click here. The interview below, which took place in English, has been edited for length and clarity.

Robin, tell us about your involvement in ACT UP Paris and how much the film is based on your real-life experiences.

I was 20 years old in 1982 when I first heard of this disease [that was spreading] in the United States. I was so afraid of it that I stopped [having] relationships—I changed my life. When I joined ACT UP in 1992, it was a kind of relief. I was for a few years very dedicated to it and was doing a lot of the actions that you can see in the film. I was on the [ACT UP] medical commission, working on tuberculosis. I think I didn’t do a great job. I was very shy, but I did my best. 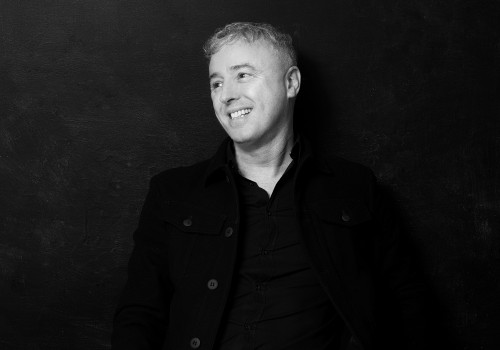 As you wrote the film, did you interview people from that time period, or did you have your own notes you could reference?

It’s all about my memory. I didn’t talk to too many people, only a few former activists when I was writing the script. The strange thing is, I think subconsciously I was thinking of the film at the time [when I was in ACT UP] because I kind of recorded all the details in my mind. It was so important to me. When I came into ACT UP, it was like I discovered a new continent, and it changed so much my life.

Are there specific aspects or details from that period that you felt compelled to convey in the film?

Because I talk to a lot of younger people, I realized that nobody knows what we were going through during those times, only others like us and some doctors, not even many people in the early ’90s. It is true that I am sharing an experience that most of the people didn’t see at the time, but to me, it was about [capturing the] emotional things and the sensual things we were going through. You can’t just explain things. You have to capture the nature of what it’s like in the middle—to be in the heart—of the group.

Is that why you include the sex scenes and clubbing scenes? What was the point of returning to the dance scenes so often?

We were very young and trying to survive, and one of the reasons we wanted to survive is because we were young and having a lot of pleasure in life. We were surviving in order to go clubbing, to take drugs, to have sex, all those things. That’s a political thing. That’s why the clubbing thing was important to me—it seems like a very important space in the film. [Compared with other settings throughout the movie, the dance club] is a space that is very dark and you don’t see the walls—it’s a kind of alternative, conceptual space. And clubs are like that; the people you know look different because of the lights and the dancing and the sensuality. To me, that was important, to be in our bodies. And our bodies were political. Of course, that’s something that’s so obvious to me.

How have audiences reacted to the film? Specifically, do you notice any differences between younger viewers and people who were around during the early epidemic?

Some [of the older viewers] are very moved by the recognition of something they lived through. And for some who knew of ACT UP, they said it was like they discovered the back stage of ACT UP. Others said [the film] was surprising for them because they didn’t realize people were struggling in the epidemic. And very young people—those born with the internet—their relationship to the epidemic and politics is really different from us, and they are really moved by the debates and theatrics [portrayed in the film]. That’s something they don’t [experience] anymore—people confronting politicians and each other. In ACT UP, we confronted each other and had democratic debates in the flesh, not through the internet. That’s very exciting and active for [younger audiences]. 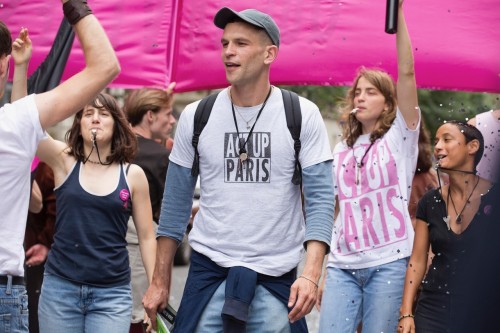 A question for the actors: What did you each know about ACT UP before you first read the script?

Arnaud Valois: I was 9 in 1992. I remember [when ACT UP put a giant pink condom on the obelisk in the middle of Place de la Concorde in 1993], and it was quite something, but I was not aware of the political message of ACT UP or the way they acted. Through the preparation for the role, I discovered who they were and what they were doing.

Arnaud, is it true that you had quit the acting profession when this role came to you?

Yes, that’s true. The casting director called me and asked if I was still acting, and I said no. They asked if wanted to audition for a part, and I said, “No, I don’t care.” Then they said, “It’s a movie about AIDS and all the political aspects through ACT UP.” And I said, “OK, why not. This sounds interesting.”

And Nahuel, what about your knowledge of ACT UP?

Nothing very different [from Arnaud]. I was very young at that time. I was born in Argentina and grew up in Argentina, and there was no ACT UP over there. But I had seen the pink triangle somewhere and some of the archive images, but I didn’t have any personal concerns with AIDS in my family or among my friends.

I learned about ACT UP when I read the script, and then we were very lucky because we were surrounded by activists from ACT UP who knew what they were talking about. Then we had access to the news and TV [clips that were] recorded in the national archive in France. And we have a book about ACT UP Paris.

Robin: In 1993, we did a book on ACT UP Paris. We had a big debate within ACT UP because some people didn’t want the book to happen, but we wanted to create it to be clear about what we were thinking and what we were acting on. It’s an important book that helped the actors, I think.

Robin, back in your ACT UP days, did you have much contact with other chapters of the group, such as the ones in the United States? How do you think they differed?

Robin: ACT UP Paris was created in 1989, two years after New York. [The process is] not as democratic as it is in your country. [We have to fill out an application to start a group, and to do that] you have to have a president. And so of course, because we had a president, we would take all the anger [out on that person]. There was a struggle all the time between the radicals and the ACT UP president, who was legally representing the group. At the time, ACT UP was a very American movement. It was exotic to the French audience the way we were doing actions—it was very American.

And I [recently] met a few ACT UP New York members when I went to the [BPM] screening. I think we had all met in ’93 at an international AIDS conference in Berlin, when we did a lot of actions together. That was fun. So I think we met but didn’t know each other too well.

Another thing that is different [from the United States] is that France is a small country, and in Paris, you have all the political power, so it’s easier to do this kind of group in Paris. In your country, you have many different centers of power.

Both France and the United States are now battling extremist right wing movements. Does BPM offer insight or inspiration for activism today?

Robin: People are really radical on Facebook or Twitter and saying crazy things, and there’s no place to start a political conversation. [In ACT UP], we were doing politics in the flesh—incarnate. The thing about AIDS today is, I think we could do much better because we have treatments and PrEP [Truvada as pre-exposure prophylaxis, the daily pill to prevent getting HIV]. We can make them lower the price of the medication, give it to Eastern Europe and Africa. It’s weird because you have all these treatments and PrEP—lots of positive things are going on—but we are not taking advantage of that.

Robin, unlike traditional American films, yours doesn’t follow just one person, the hero. Instead, you focus on a group. Even what we’d consider the love story feels less traditional and more like a group experience. Can you talk a bit about balancing the needs of the group and the individual? 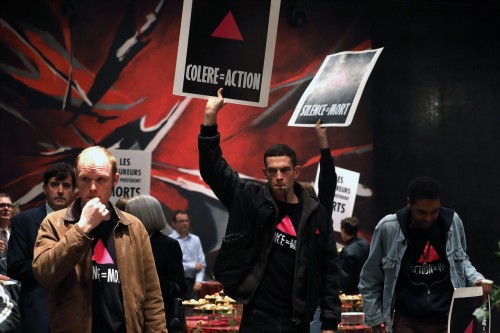 So you tried to mix up the styles or genres?

Not so much mix them, but…. I know that when you are in a group of actors it’s a collective group, but it’s still about your own intimacy. It’s not a contradiction! If you make politics out of your body and of your experiences and your sexual orientation and sexual behavior, that is always something that is at the same time collective and intimate, and it is all connected.

And this couple—they’re not a real couple because they are too new as a couple—in this time period, people are getting together, and one is getting ill and the other staying, and there’s a blur of emotions. The sex scenes are the most intimate moments in the film. But because [the men] are in a collective, they’re like a family, they are former lovers, like ghosts—you are connected to each other. I love this idea that even when they are in the bed, they are not alone, that they are sharing their experiences, and that experience is with a lot of former lovers. When I do a film, I like to talk about the relationship between collective things and the intimate and the contrast of how you go from one to the other. For me, that was interesting and important to show.

For a 2011 POZ profile on Didier Lestrade, the cofounder of ACT UP Paris, read “The French Connection.” 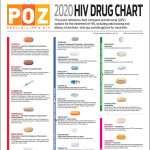