Among Gay & Bi Men, Syphilis Is Much More Common In Those With HIV

This disparity in the syphilis diagnosis rate among men who have sex with men varies widely between states.

Among men who have sex with men (MSM), those living with HIV have a much higher syphilis diagnosis rate than those who are HIV negative. This disparity varies widely between states and could be driven in part by more frequent testing among HIV-positive MSM or minimized by more sexual contacts between the two groups.

Centers for Disease Control and Prevention (CDC) researchers presented their findings of a recent analysis of syphilis diagnosis rates among MSM in a poster presentation at the 2018 Conference on Retroviruses and Opportunistic Infections (CROI) in Boston.

The investigators looked at national case report data on syphilis diagnoses from 2014, which included for their purposes information on the sex of the person diagnosed, the sex of that person’s sex partner and the men’s HIV status. They limited their analysis to the 34 states that provided data that classified at least 70 percent of the syphilis cases as women, MSM or men who have sex with women only.

To develop a denominator for their analysis, the investigators relied on existing estimates of the size of the MSM population in each state. 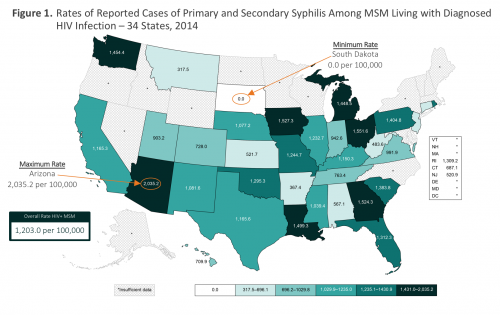 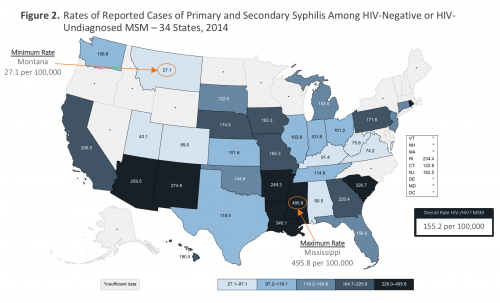 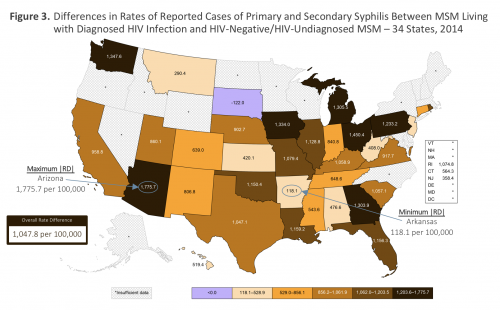 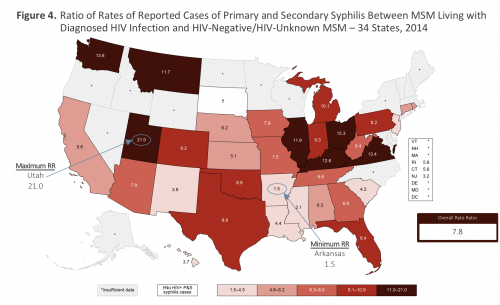 The CDC researchers speculate that the disparity in syphilis diagnosis rates may be driven in part by a greater rate of testing for the sexually transmitted infection among those MSM living with HIV compared with HIV-negative MSM. Additionally, they conjectured that in states with lower syphilis diagnosis ratios between MSM with and without the virus, more sexual interactions between these two groups might have spread the STI more evenly between them. The phenomenon of serosorting, in which MSM seek out sexual partners of their own HIV status, as well as differences in condom-use rates between those with and without HIV, might have increased the disparity.